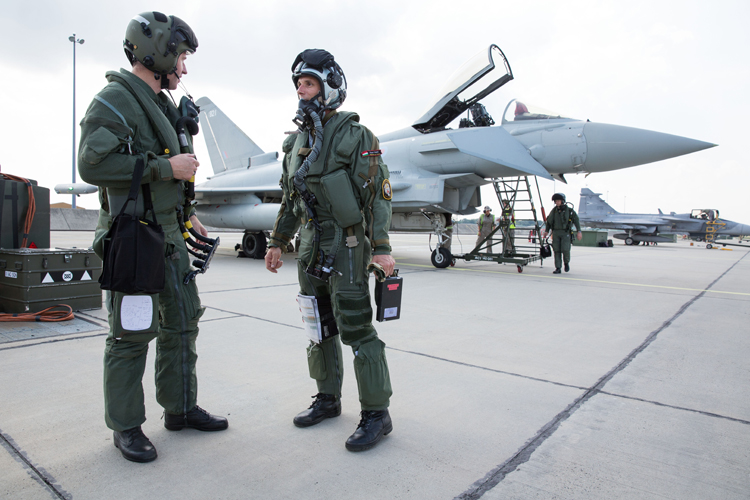 RAF Press Release: This is the first time Royal Air Force Typhoon and Hungarian Gripen jets have trained together in this way and aims to strengthen a growing defence relationship between the United Kingdom and Hungary. Gaining first-hand experience of working together will lead to a better understanding of capabilities and increased co-operation in the air and among ground crews.

Squadron Leader Ellis Williams leading the Royal Air Force detachment said: “We have two Typhoon jets and there are quite a few of the Gripens so every day we are looking to do a pair in the morning and a pair in the afternoon, both visual combat and beyond visual range work.

Captain Jozsef Papp of the Hungarian Air Force said: “It is really good to see a different aircraft, what the guys are doing in the air, what is the cooperation and its giving a really good experience.”

The RAF Typhoons of 1 (Fighter) Sqn are normally based at RAF Lossiemouth but are currently deployed to Mihail Kogalniceanu Air Base, Romania, to conduct Enhanced Air Policing (eAP) from July to Aug 2018, as a part of NATO’s Assurance Measures introduced in 2014.

Squadron Leader Williams said: “With Operation BILOXI we are down in Romania carrying out air policing and within that we are taking opportunities to train and engage with other nations. For example, we have recently come back from Croatia where we did a similar thing with their MIG 21 aircraft and we get the privilege of being here for a week with the Gripens to do training together, so it is all part of a four-month detachment in Romania.”

The United Kingdom Ambassador to Hungary, Iain Lindsay, OBE, visited the base to thank the Hungarian Air Force for their continued support for the joint training and to meet the Royal Air Force personnel involved. He said: “I have been delighted to hear how well and how smoothly our air and ground crew have worked together this week. I really believe this personal experience and the friendship formed during events such as Flying Sword really do contribute to the future success of our military relationship.

“The UK is keen to deepen bilateral and regional cooperation with our NATO allies, our commitment to the NATO enhanced Air Policing reassures our allies that we stand by our NATO commitments and our commitments to European security. It also gives a great opportunity to train together, to practice together, to learn from each other and to get to know each other.”