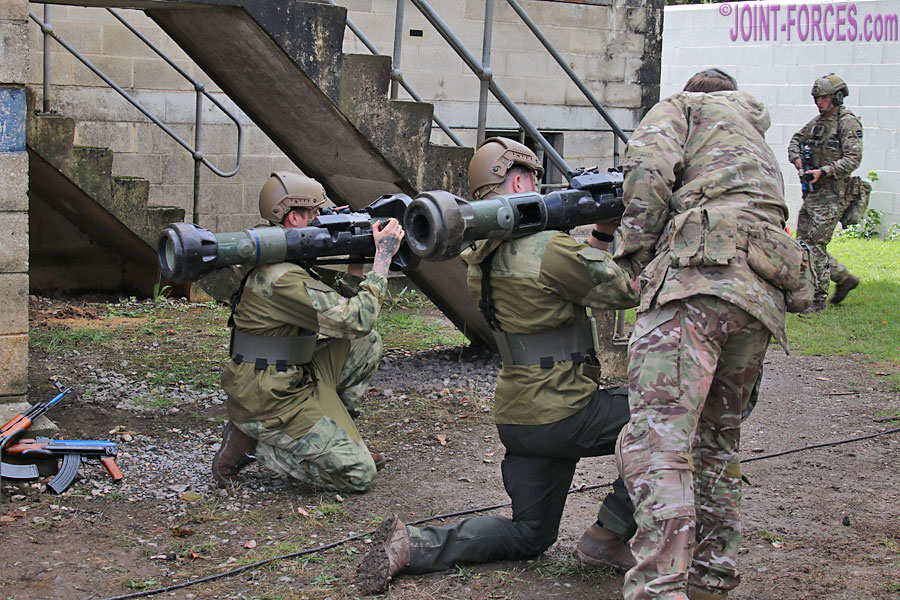 Introduction: It had been originally intended that this article would run on Saturday 10th September, following a planned Media Day on Friday 9th, but the announcement on the Thursday evening of the unexpected death of Her Majesty Queen Elizabeth II at Balmoral and the subsequent start of the Period of National Mourning caused us to hold back publication until the day after The Queen’s State Funeral. The media facility for ARMY EXPO 2022 was, understandably, first postponed and then cancelled, but as I had attended at Copehill Down on the 8th (primarily for a recce after flying back from MSPO 2022 in Poland the previous day to ensure I could cover this important event) I was able to take these images between the downpours on what turned out to be a very sad day indeed.

In a nutshell, the November 2021 FUTURE SOLDIER Transformation is the British Army’s vision for becoming more lethal, more agile and more expeditionary. At ARMY EXPO 2022 on Salisbury Plain, which was scheduled to run over five weekdays between 8th and 14th September, an invited audience received a first-hand insight into the modern British Army and viewed some of the capabilities of its equipment as well as being given an introduction to new initiatives across four key themes, namely: Protect, Engage, Constrain and Warfight.

¤ Protect: Brought hands-on demonstrations and expert presentations across three stands covering everything from the work being done to support society at home, to how the Army stays ahead by innovation and experimentation, to how they invest in their own people ~ including Regulars, Reserves and the Civil Service.

¤ Engage: Explained how the Army is deployed globally with a wide range of operations and exercises to build partner capacity and provide a forward presence. Across three more stands, visitors could find out about the Security Force Assistance Brigade and its future capabilities, Army support to United Nations missions, and the ongoing Operation ORBITAL / INTERFLEX training for Ukrainian forces and provision of military aid and weapon systems.

¤ Constrain: Was set in the heart of the action within a scenario where personnel were deployed to Eastern Europe working alongside partner forces. Visitors could find out how 6 [UK] Division uses modern technology to integrate between ‘Forward’ and ‘Stand Off’ elements whilst training with allies. Themes here included:-

¤ Warfight: Warfighting is the cornerstone of deterrence. From two viewing points, invited visitors to ARMY EXPO 2022 were able to “get up close and personal” to demos ranging from a Global Response Force shaping operation to an Armour and Infantry combined assault:-

The accompanying photos are merely snapshots of a number of the varied displays and demonstrations, but hopefully they should give readers a flavour of ARMY EXPO 2022.

Footnote: After attending Day One of ARMY EXPO 2022 I have to say that I came away both slightly shell-shocked by the breadth and scope of everything laid on for the visitors and also looking forward to being able to focus more on specifics the following day. With over half a lifetime spent behind the lens I have seen the British Army transform incredibly while threats waxed and waned and waxed again. Having witnessed operations and exercises over several decades I do not unquestionably believe everything I am told at set-piece MoD showcases, but much of what I saw at ARMY EXPO 2022 appeared to make sense to me ~ though I suspect some of that legion of twittering armchair generals who appear intent on persuading the British Army to fight as in past wars may not see things quite the way I do. It is just a pity that the sad circumstances which arose on Thursday 8th September curtailed formal media access to the EXPO and prevented further coverage of what looked to be a very worthwhile opportunity to discover how the British Army sees itself evolving to meet present and future challenges, because I suspect it may be some time before a similar opportunity next arises.