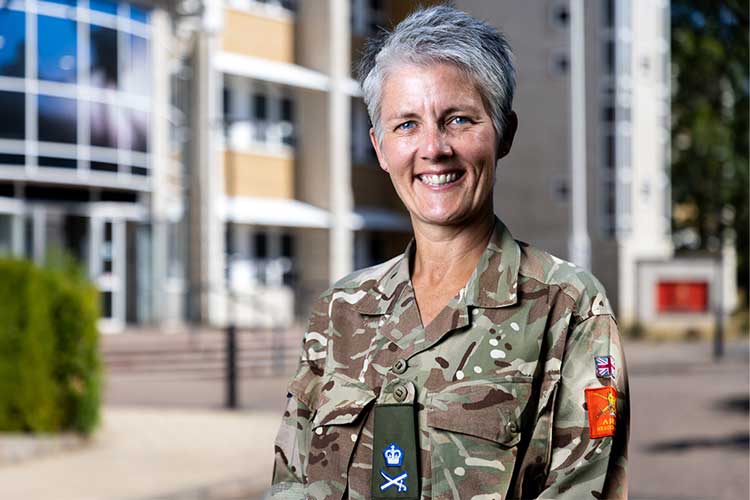 Press Release, Whitehall, 12 August 2022: Lieutenant General Sharon Nesmith has taken up the role of Deputy Chief of the General Staff (DCGS), becoming the first female British Army officer to hold the rank of Lieutenant General and occupy this prestigious role. The appointment, which was approved by Her Majesty The Queen, was announced in April 2022.

Defence Secretary Ben Wallace said: “I am delighted that Sharon Nesmith has taken up her role as Deputy Chief of the General Staff. She brings extensive experience and new ideas to drive the Army’s transformation and deal with emerging threats across the world.”

Lieutenant General Nesmith said: “I am deeply honoured to be appointed as the Deputy Chief of the General Staff at such a pivotal time for the British Army. I am excited to be playing my part in leading the Army’s mobilisation to meet today’s threats, and the delivery of our Future Soldier’s bold modernisation agenda.

Raised in Northumberland, Lieutenant General Sharon Nesmith commissioned into the Royal Corps of Signals in 1992, spending the majority of her early years serving in Germany, the Balkans and Iraq. Whilst in command she has been responsible for providing information and communication services, command support and capability development, in support of formation headquarters up to and including the Allied Rapid Reaction Corps and the UK Joint Force Headquarters. Higher command appointments were the 1st (United Kingdom) Signal Brigade and General Officer Commander the Army Recruiting and Initial Training Command.

Staff appointments have been focussed on capability development, resource planning and personnel. She has completed the Higher Command and Staff Course and is a graduate of the Major Projects Leadership Academy. She has served as Colonel Capability Plans in the Army Headquarters, the Head of Manning as a Brigadier, and the Director of Personnel as a Major General. She has also been the Senior Responsible Officer for the Armed Forces Recruiting Programme. She became the Deputy Chief of the General Staff in August 2022.

General Nesmith is the Master of Signals, a Colonel Commandant for the Royal Electrical and Mechanical Engineers, and a Vice President for Army Football and Army Rugby.

British Army, DCGS, Deputy CGS, Deputy Chief of the General Staff, Featured
You may also like