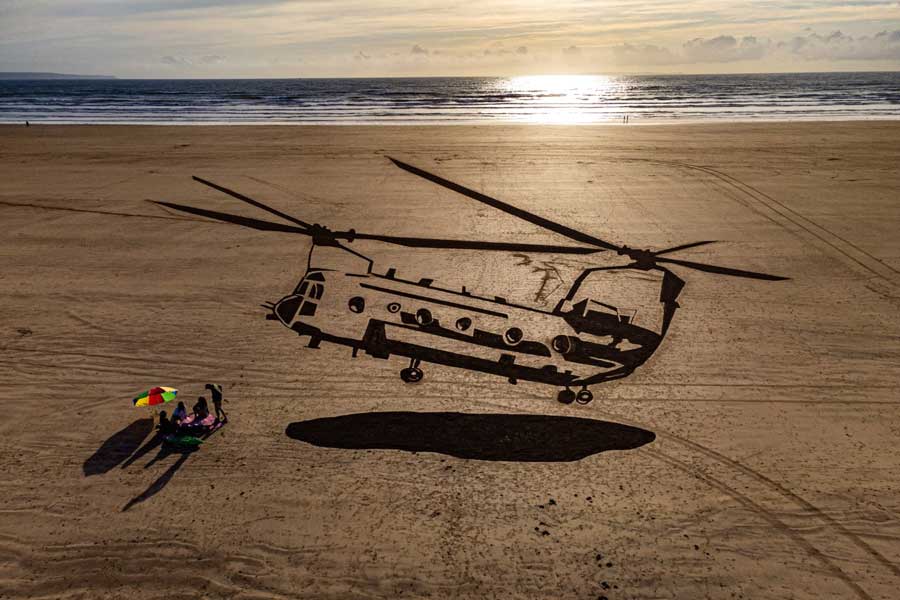 A 100-metre Chinook helicopter, created from sand, apparently appeared on a British beach to draw attention to a serious public safety risk.

Ahead of the busy summer holiday season, the Defence Infrastructure Organisation (DIO), part of the Ministry of Defence (MoD), is urging holidaymakers and locals to take extra care and check military firing and training times when accessing MoD sites shared with the public. This includes a number of popular coastal locations.

Depicting an oversized military vehicle, the sand drawing was brought to life on Saunton Sands beach in Devon, an area steeped in military history and adjacent to the Braunton Burrows Training Estate. The artwork launches the next phase of the Respect the Range campaign, a public safety initiative to warn visitors about the very real risks they face when entering shared land used by the MoD for training. Risks include:

Accessing military training estate areas when it is not safe to do so, not only places visitors in harm’s way, but can also put service personnel at risk and interrupt vital training exercises designed to prepare the Armed Forces’ to deploy in real-life situations. The MoD wants to raise awareness of the risks to the general public, especially any holidaymakers or day-trippers heading to coastal hotspots this summer.

There are a large number of MoD training locations across the UK, but Respect the Range highlights the following key sites with shared public access that could pose significant risk to locals and tourists: Lulworth, Holbeach, Donna Nook, Barry Buddon, Lydd & Hythe, Salisbury Plain and Aldershot. To protect themselves and stay safe while using military land, the MoD is encouraging visitors to:

Brigadier Jonathan Bartholomew, DIO’s Head of Overseas Region and the Defence Training Estate, said: “With the summer holidays now upon us, it’s an important time for us to raise public awareness about MoD training estate locations and how the public can stay safe when visiting them. Whilst last year’s Respect the Range campaign targeted the countryside of Salisbury Plain and Aldershot, this year we are focusing on protecting tourists and visitors on our coastline.

“These beauty spots are shared land, where families, tourists and locals spend time. But it’s also where our Armed Forces practise live-fire training, so it can go from tranquil to treacherous by the hour, 24 hours a day.

“The MoD supports public access to much of the military estate and encourages visitors to explore the beauty of Britain’s beaches, but this should be done in accordance with military guidance and with caution. We ask that the public do not cross into areas that are prohibited, stick to public paths and always check live firing times. This will help protect yourself, your loved ones and military personnel. It’s key that we work together to share these spaces with respect and consideration.”

Respect the Range highlights the dual use of each location by using memorable photography and design, and targeting the most popular types of land usage in the hotspots. This phase of the campaign builds on last year’s pilot, which focused on MoD’s landlocked locations, by bringing in coastal locations too. The dangers differ but are equally as dangerous between the distinct terrains, and it is important that the public are aware of these in order to stay safe.

Please note that Braunton Burrows Training Estate is not an area used for live firing exercises.

Editor’s Comment: We have used the MoD lead illustration issued with News Release, which many readers will have spotted is apparently a digital manipulation rather than an accurate record of the sand sculpture, as at time of posting no true image showing the artwork in its entirety has been made available.