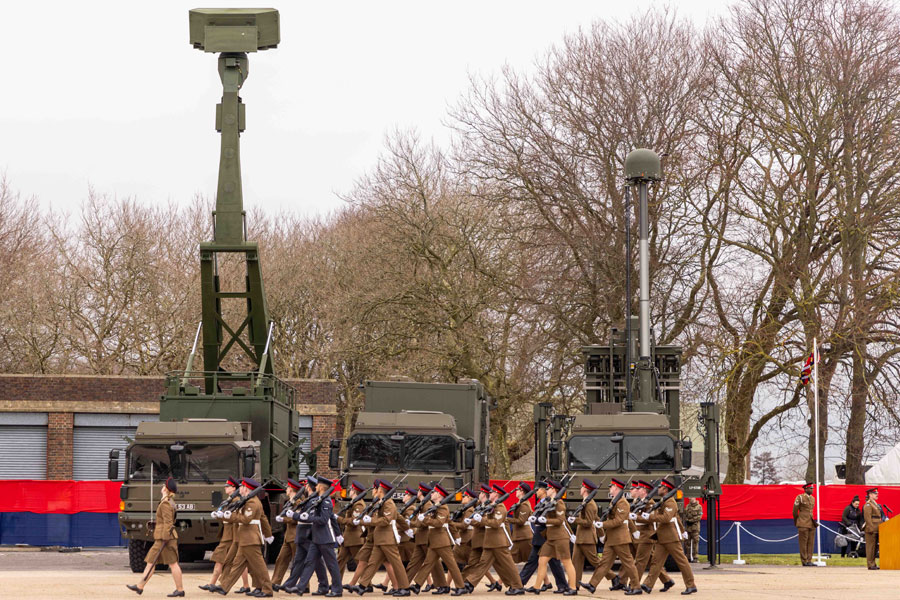 However, this colours parade was in stark contrast to any other conducted by the infantry and cavalry regiments that form the British Army. They hold their allegiances to richly embroidered silk standards (flags) and guidons (pennants). This being a Royal Artillery regiment means their weapons are their colours.

Regimental colours were once used to identify regiments amidst the smoke and chaos of the battlefield. They were in effect a rallying point for the troops of that regiment and as such, the colours instilled a deep sense of pride, loyalty and an esprit-de-corps among the troops. Once the colours were struck (taken or withdrawn) it symbolised defeat for that regiment, consequently the colours would be fiercely defended at all costs. However, in the case of the Royal Artillery, their guns were their most cherished asset, similarly never to fall into the hands of the enemy just like the colours of the infantry regiments and so the guns assumed the mantle of the regimental colours. Fast forward to 2022 and 16 Regiment Royal Artillery, being an anti-aircraft unit, has missiles instead of cannons and so it is their missile systems that are their colours.

For nearly 50 years it has been the venerable Rapier Missile system that has stoically protected British soldiers and assets from aerial attack. It has served in Kuwait, the South Atlantic and probably most visibly when it deployed to numerous London parks to combat any security threat during the 2012 Olympic Games. Yet as the Army continues to modernise its capability, so Rapier has reached its out-of-service date to be replaced by the all new state-of-the art Sky Sabre air defence system.

So the parade assumed a strange juxtaposition between the traditional pomp and ceremony one expects of such a formal military occasion coupled to the cutting edge technology of a world-beating integrated missile defence system. In front of Lieutenant General Sir Chris Tickell KBE, the inspecting officer, and hundreds of invited guests, many of whom were veterans of Rapier’s passed years along with engineers and technicians from the developers of Sky Sabre, Rapier was ceremonially driven off the parade square. Having paid a fond farewell to Rapier, it was time for Sky Sabre to enter the occasion. To a specially written piece of music aptly titled ‘Sky Sabre Fanfare’ composed and performed by the British Army Band Tidworth, the troops on parade conducted a march past with a salute and eyes right to the all-new Sky Sabre proudly overlooking the ceremony, now their new regimental colours.

Sky Sabre marks a massive leap forward in the UK’s armed forces’ capability to defend itself from fast attack jet fighters, missiles and even air dropped bombs. Its accuracy and agility means it is capable of intercepting an inbound object the size of a tennis ball travelling at Mach 1. If that wasn’t impressive enough it could do this to 24 tennis balls all travelling at the speed of sound simultaneously!

In his address to the parade and assembled guests, Lieutenant General Chris Tickell KBE said, “This moment is nested in the most ambitious period of transformation that we have embarked upon in a generation, under the banner of Future Soldier over the next ten years we will invest between 35 and 40 billion pounds in new equipment. It will deliver a modernised and digital army fit to compete and win in the 21st century.”

The whole system comprises of three components: The eyes and ears of the system is its AMB 3D surveillance radar which as previously mentioned is fondly referred to as the Giraffe on account of it extending mast that supports the rotating radar. It looks out over a full 360° to a range of 120Kms.

At the heart of the weapon system lies its battle management and intelligence suit. It is the link between the radar and the missile launcher and provides the vital targeting data. It also provides a Link 16 capability; a tactical datalink that allows Sky Sabre to converse with Royal Navy vessels, the Royal Air Force along with our allies. It means it can be integrated wholly with joint, combine or NATO operations.

Then there’s the punch – the missile itself! weighing in at 99Kg each, they are double the weight of a Rapier with three times the range. It is the Land Ceptor Missile, reaching speeds up to 2300mph and able to take out fighter aircraft, drones and even smart laser-guided bombs.

Speaking proudly of his regiment’s new colours, its Commanding Officer, Lieutenant Colonel Chris Lane MBE said, “Today we recognise we move from Rapier where we have had that ground based air defence weapons system for 50 years into a new era with Sky Sabre a modern anti-air warfare system that will take not just the Royal Artillery and this regiment, but also the British Army into the 21st century.”

Sky Sabre marks a new dawn in the UK’s air defence capability, not only is the system itself such an improvement in its accuracy and capability, but it combines this with the ability to integrate with both the UK’s other armed forces and our allies.