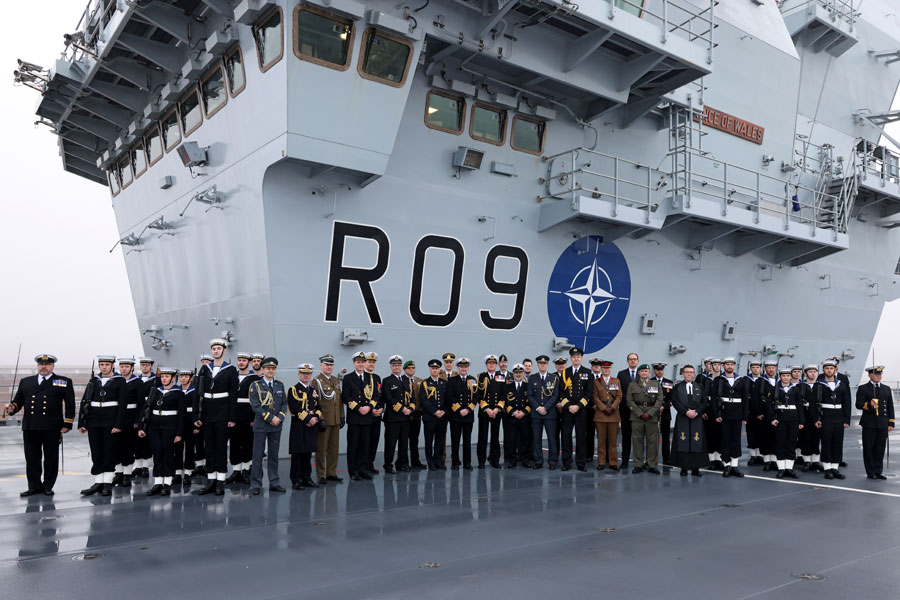 The Royal Navy has taken charge of NATO’s most important task force with a ceremony aboard aircraft carrier HMS Prince of Wales in Portsmouth.

Press Release, Whale Island, 11 January 2022: The Royal Navy today took charge of NATO’s most important task force with a ceremony aboard aircraft carrier HMS Prince of Wales in Portsmouth. For the next 12 months it is responsible for leading the alliance’s Maritime High Readiness Force – an international task group formed to deal with major global events.

The most senior sea-going staff in the Royal Navy – Commander UK Strike Force, headed by Rear Admiral Mike Utley – takes charge of the force, with HMS Prince of Wales serving as NATO Command Ship, ready to deploy in support of NATO exercises and operations throughout the year. Those will include major workouts for British and allied forces in the Arctic at the end of the winter, Baltic in the summer, and an extensive deployment to the Mediterranean in the autumn.

To mark the formal transfer of command from the French Navy, the NATO flag was raised aboard the carrier today during a ceremony where Fleet Commander, Vice Admiral Andrew Burns, supported by Captain Steve Higham, Prince of Wales’ Commanding Officer, inspected some of the ship’s company before addressing them. Commander UK Strike Force underwent thorough training and preparations for the complex challenge of directing a large, multi-national naval force.

“Our battle staff have been preparing for this responsibility over the last 12 months by exercising and developing the capabilities required, which culminated in NATO’s DYNAMIC MARINER exercise in September 2021,” Admiral Utley said.

“This exercise demonstrated to our NATO allies that the UK’s carrier strike capability will strengthen NATO countries’ long-term ability to work side-by-side and our commitment to each other.”

As well as a test of the battle staff, it will be the first test of HMS Prince of Wales since the carrier was declared fully operational at the beginning of autumn following two intensive years of trials and training. The ship is due to sail tomorrow, raising the curtain of a demanding year in the waters of the Atlantic, northern Europe and Mediterranean.

“This year, as the NATO Command Ship, we will spend over 200 days at sea operating globally with our allies. We are ready to lead UK carrier operations for NATO over the next 12 months,” said Captain Steve Higham, Prince of Wales’ Commanding Officer.

First up is leading naval involvement in COLD RESPONSE 22, a large-scale Norwegian led NATO exercise which will be used to evaluate Rear Admiral Utley and his staff as the Commander of the NATO Response Force.

“NATO is the cornerstone of the UK defence and our commitment to the alliance is absolute and it is a privilege to be the UK Maritime Component Commander moving into our vital role this year,” Admiral Utley stressed. “The Royal Navy is global, modern, ready and well placed to support NATO in all its endeavours.”

As the year moves on, the staff will also help train and ready the Turkish Navy who will assume command of the NRF from the UK in 2023.