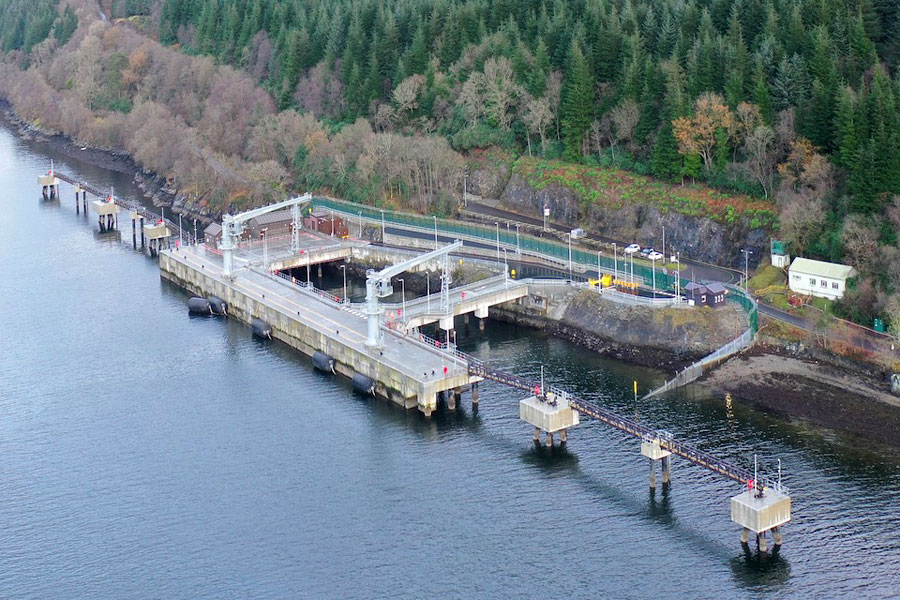 The UK DIO has completed a significant series of upgrades to the Northern Ammunition Jetty at Glen Mallan near Helensburgh.

News Release, Whitehall, 12 January 2022: The Defence Infrastructure Organisation (DIO) has completed a significant series of upgrades to the Northern Ammunition Jetty at Glen Mallan near Helensburgh.

The jetty, which is used to load and unload ammunition for the Royal Navy’s surface fleet, was last upgraded in the 1970s and had reached the end of its economic life. The upgrade work has not only extended the life of the jetty by an estimated fifty years, but has also made the site accessible for the Royal Navy’s aircraft carriers, HMS Queen Elizabeth and HMS Prince of Wales.

The £67-million pounds contract was awarded to VolkerStevin in 2019. Alongside them, DIO also worked with managing agent Jacobs, who provided engineering and professional services, as well as designer Arch Henderson. In completing this major project, £20-million pounds was spent with local suppliers and small and medium enterprises in Scotland.

The previous jetty was demolished and replaced with a new 135m long jetty structure, requiring 127 steel piles to be driven into the loch bed to support a reinforced concrete deck. The works also included the installation of navigation aids and five mooring dolphins which are connected to the jetty by a pedestrian access bridge. Two modular fender spacer units have been placed in front of the new fender panels and move with the tide to prevent the overhanging flight decks of HMS Queen Elizabeth and HMS Prince of Wales from colliding with the jetty. In addition, the project included the installation of two modern pedestal cranes to load and unload ammunition and the erection of modular buildings for offices, power generation and stores. The perimeter fencing and CCTV system have also been upgraded to provide a complete modern facility.

The team faced a challenge when the scale of HMS Queen Elizabeth’s first planned deployment increased, resulting in the need for the jetty to be operational nine months earlier than originally planned. All parties worked closely together to progress the project sufficiently for the Royal Navy’s flagship to be able to berth at the unfinished jetty, which she did successfully in March [last] year.

Sustainability and protecting the environment of Loch Long was an important consideration for the project team. The use of capture blankets prevented material from entering the water when the old jetty was demolished. All jetty demolition waste was transported on barges offsite to recycling facilities on the Clyde to minimise disruption to the public and will be reused for construction. To avoid the need to lay new electric cables through the water, the new navigation aids are solar powered.

There were concerns about the possible impact of noisy piling works on marine mammals, so two observers used underwater listening devices, along with visual inspections, to make sure no marine mammals were in the area before work began. If any were located, work was stopped to give them time to move away.

Craig MacDonald, DIO’s Project Manager, said: “It’s been such a pleasure to work on such a nationally-important and dynamic project. The project has faced numerous challenges, but they have been overcome with good teamwork, communication and collaboration. It’s great to see this vitally important facility now in full operation.”

John Cox, managing director, VolkerStevin said: “We are very proud to have played a key role in the successful delivery of all three phases of the Queen Elizabeth Class Aircraft Carrier infrastructure upgrade programme. The completion of this final phase, is testament to the hard work and commitment of the entire team, and demonstrates the benefits of a strong collaborative approach in the delivery of complex critical infrastructure projects.”

Justin Goldberg, Jacobs’ Vice President for Defence & Security, said: “As Principal Service Provider, we managed the contract on behalf of DIO as part of a dedicated team with the vision and drive to keep this project moving forward. Through early contractor engagement and close collaborative working, we were able to deliver within budget and programme constraints, providing the Royal Navy with an important facility for years to come while ensuring sustainability and protection of the environment. We are now applying best practice from this exemplar project to other maritime work.”

As a critical national infrastructure project, work continued through the pandemic with all necessary precautions taken and guidance followed to keep everyone safe.

The jetty was handed over to Defence Equipment and Support, who will operate it. The Glen Mallan Northern Ammunition Jetty is the third and final jetty refurbishment to support the nationally critical £7-billion Queen Elizabeth Class (QEC) Aircraft Carrier programme.