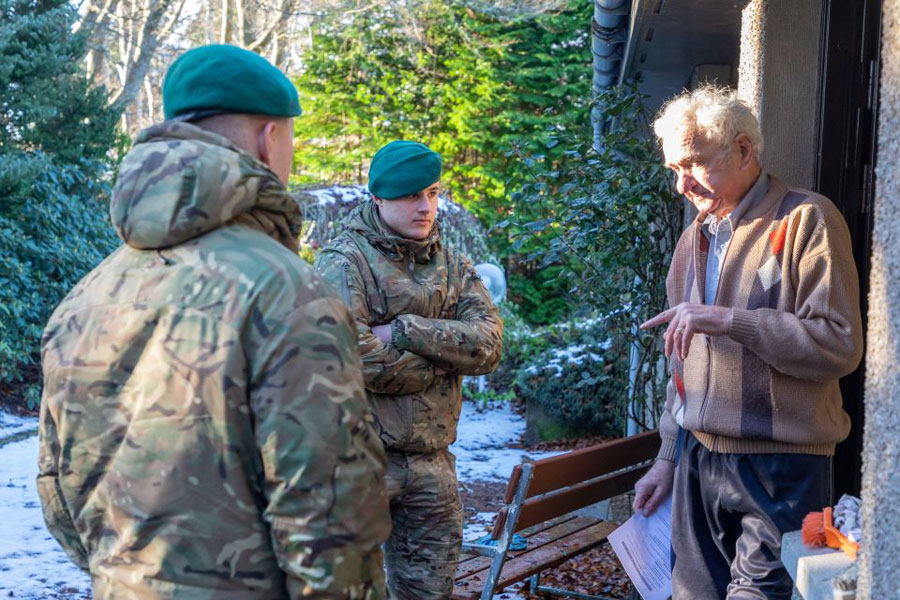 Storm ARWEN ~ Military personnel have deployed at pace in response to urgent requests for assistance from the civil authorities.

Press Release, Whitehall, 04 December 2021: Military personnel have deployed at pace in response to urgent requests for assistance from civil authorities in Scotland and northern England.

297 personnel from the British Army and Royal Marines are supporting civil authorities in areas impacted by the storm. Those on task are conducting door-to-door checks on vulnerable people in their homes and providing reassurance to local communities.

Today (4 December), 80 soldiers of 4 Royal Artillery based at Alan Brook Barracks in Topcliffe have deployed to Northumberland to check on vulnerable people and identify where additional support is required. Yesterday, 83 personnel from The Royal Lancers deployed from Catterick Garrison to aid Durham County Council, working with remote and isolated communities.

In Aberdeenshire, 134 soldiers and marines from 3 SCOTS, 39 Engineer Regiment and 45 Commando began on task on 2 December.

Soldiers deployed to northern England are part of the UK Standby Battalion North, ready to deploy at extremely short notice to respond to emergencies and crisis events. The military remain on standby to provide further support, including delivering of vital supplies, if requested.

UK Prime Minister, Boris Johnson said: “My thoughts are with all those who are still affected by the terrible damage from Storm ARWEN. I want to thank the emergency responders and engineers who have been working tirelessly this week to try and restore power.

“I also want to thank our brilliant Armed Forces who have been deployed rapidly to support those communities which are worst affected.”

Defence Secretary Ben Wallace said: “Our dedicated Armed Forces personnel are working side by side with civil authorities to provide essential support to communities impacted by Storm ARWEN.

“The ability to deploy quickly to wherever in the UK assistance is requested makes us all safer and ensures we are able to look protect the most vulnerable in our society.”

Thousands of military personnel are on standby to support resilience tasks across the UK, including the response to the Coronavirus.

Support to the storm response is provided through Military Aid to the Civilian Authorities (MACA) requests, the official process for Defence to provide assistance to other government departments and civil authorities for responding to emergencies, maintaining supplies and essential services during a crisis. The Ministry of Defence will continue to engage with civil authorities and other government departments to support where appropriate.

Over the past seven days, emergency teams have been working tirelessly to restore power in affected areas. Around one million people have been affected in total and power has now been restored to 99% of those affected.