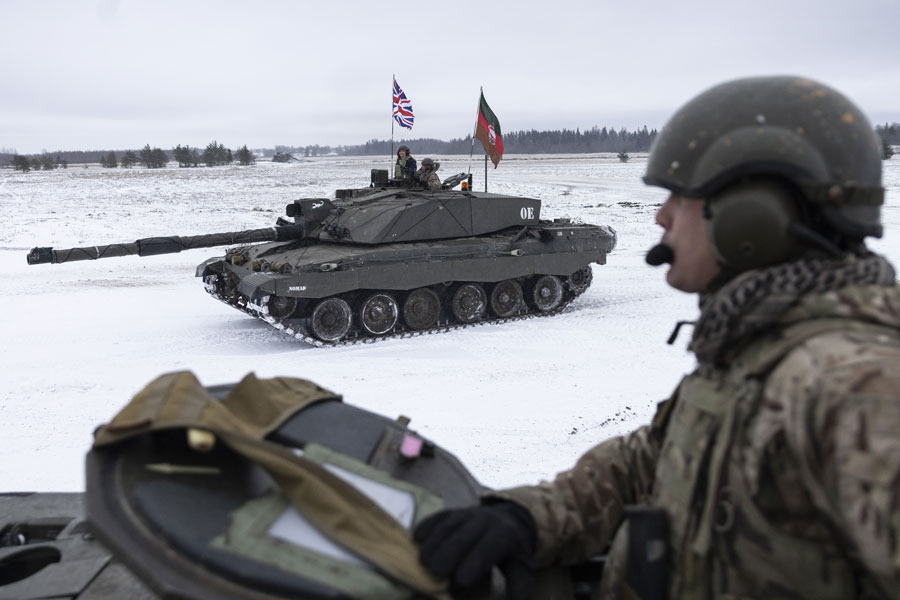 UK Foreign Secretary Liz Truss visits British troops on deployment to Estonia as a part of the enhanced Forward Presence (eFP) as they operate alongside other NATO troops in Tapa [Crown Copyright: Simon Dawson / No.10 Downing Street]

Foreign Secretary Liz Truss will underline the UK’s ongoing commitment to NATO as an essential defence at today’s meeting of NATO Foreign Ministers.

Top of the Foreign Secretary’s agenda is the need for Allies to come together to stand against continued destabilising actions by Russia and Belarus. This follows the build-up of Russian troops on the border of Ukraine and the cruel instrumentalisation of migration by Belarus. Russia has also tried to use economic coercion to undermine NATO Allies in recent years, for example through seeking to exploit energy dependency.

The Foreign Secretary will call for Allies to rally together, to stand up to any Russian aggression while maintaining open channels of communication to set out our intentions and values. She will underline NATO’s purpose as an organisation for collective defence and deterrence, calling out recent false claims by Russia that the Alliance seeks to provoke. Russia has previously used such claims that NATO aggression justified the illegal annexation of the Crimea and continues to take this position to try to create a false pretext. Indeed Russia has just this week alleged that NATO’s response to a build-up of Russian forces on the border of Ukraine is an act of hostility rather than deterrence. She will underline that an incursion into Ukraine would be a strategic mistake, and the UK will use all diplomatic and economic levers at our disposal to avoid that outcome.

The Foreign Secretary will outline the need for NATO Allies to increase their financial commitments to the Alliance in response to these and other hybrid threats, and encourage countries to support Ukraine’s defences. The UK is helping Ukraine strengthen its military capabilities and ability to work with other forces, including through Operation ORBITAL, under which the UK has trained over 21,000 members of the Ukrainian army. Ukraine and Georgia will both attend the meeting this week in Riga as key NATO partners.

Foreign Secretary, Liz Truss said: “We want a world where freedom and democracy don’t just survive, they thrive. To this end, we will stand with our fellow democracies against Russia’s malign activity.

“We will support Ukraine and stability in the Western Balkans, to safeguard their security and build their economic resilience.

“We have seen this playbook from the Kremlin before when Russia falsely claimed its illegal annexation of Crimea was a response to NATO aggression. NATO is an alliance forged on the principle of defence, not provocation. Any suggestion that NATO is provoking the Russians is clearly false.

“Any action by Russia to undermine the freedom and democracy that our partners enjoy would be a strategic mistake.”

Ahead of the meeting, the Foreign Secretary visited Estonia to show her support to UK troops protecting NATO territorial integrity on NATO’s Eastern flank. More than 800 British soldiers are currently stationed there as part of NATO’s enhanced Forward Presence, with collective forces across Estonia, Latvia, Lithuania and Poland.

Looking ahead to NATO’s new Strategic Concept, Foreign Ministers will discuss new and emerging forms of hybrid warfare, and the need to continue work to future-proof the Alliance against these threats. Allies will also discuss continued work to prevent Afghanistan becoming a safe haven for terror.

This follows the publication of the Integrated Review earlier this year, which brought together diplomacy, development and defence to strengthen the UK’s ability to build a global network of liberty and protect against malign actors. This was supported by the biggest investment in our defence for thirty years and a reinvigorated, expanded diplomatic network.

After Estonia and Latvia, the Foreign Secretary will be travelling to Stockholm for the Annual OSCE Ministerial Council. The meeting will bring together the OSCE’s 57 participating states, most represented by their Foreign Ministers, and will be a forum for further discussion of issues critical to the security of the region, including human rights violations in Belarus and the situation in Ukraine.