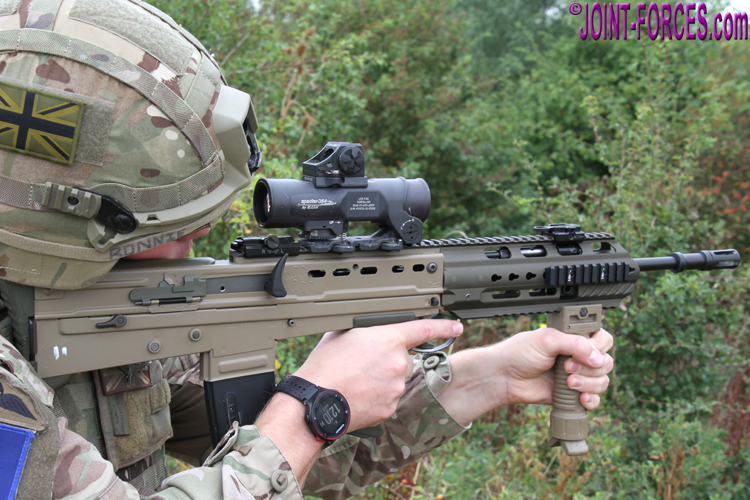 The UK MoD has announced a requirement for an Alternative Individual Weapon (AIW) system for the Army Special Operations Brigade.

Contract Notice, Whitehall, 26 July 2021, amended 29 July 2021: [Extract from] Contract notice for contracts in the field of defence and security.

The AIW system must be optimised to be used with a suppressor fitted as its primary configuration. The AIW system will consist of:

1. A Rifle System (comprising of a Rifle and Signature Reduction System); and

An AR platform is defined as being gas operated with a rotating, locking bolt.

The rifle should have a non-reciprocating charging handle.

The rifle’s controls are to include: a magazine release, working parts release and a rotating selector lever that incorporates a safe setting.

The rifle is to have a standard configuration, not bullpup, with the magwell in-front of the trigger housing.

The rifles upper and lower are to be mated using industry standard pivot / takedown pins located at the front and rear of the lower receiver.

Optic System: The Optic system is to complement the Rifle and should be ballistically matched to the stated ammunition nature and supplied barrel length.

Alternative Individual Weapon System: As a complete system, the AIW system is expected to perform consistently regardless of its configuration, i.e. with or without a Signature Reduction Device fitted, across all operational scenarios.

This Procurement is subject to the following Staged approached:

Stage 1 – DPQQ Down Select of economic operators to be issued the ITT to be invited to tender AIW Systems (Rifle System and Optic System) for a place on the framework agreement.

Stage 2 – Up to a maximum of six (6) AIW Systems (Rifle Systems and Optic Systems) will be selected for which the economic operators shall be awarded tasks under the framework to supply and support the trial AIW systems.

All economic operators that have successfully passed the DPQQ stage will be invited to submit bids under the framework agreement for the provision of a minimum quantity of 88 AIW systems up to a maximum quantity of 528 AIW systems depending on the number of acceptable AIW system variants offered to the Authority. The economic operators will be reimbursed for the cost of the Supply and support of the trial systems.

Following the outcome of the competition at Stage 3, it is envisaged that those Trials weapons supplied under stage 2 will be utilised by Army HQ to inform the 24-Hr Digital Lethality Project that is in the Concept Stage, therefore offering long-term Value for Money (VFM) to the Authority.

The mini competitions will include: pricing to procure the AIW system, option pricing for additional systems, technical through life support (TTLS) requirements, full evaluation methodology (commercial & technical), and will outline the Safe & Suitable for Service (S3) and User.

Following the evaluation at Stage 3:-