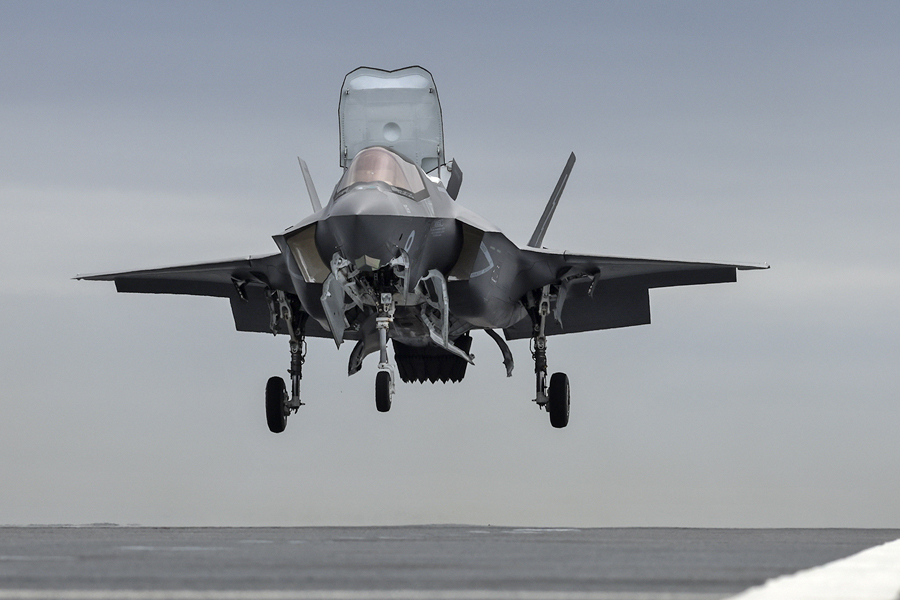 An F-35B jet has safely landed onboard the Royal Navy’s latest addition to its fleet, HMS Prince of Wales, during sea trials.

Taking place off the south coast of England, the milestone marks a significant step towards the 65,000-tonne vessel reaching full operational capability. Operating together as part of Sea Acceptance Trials, it is the first time a fixed wing aircraft has landed onboard HMS Prince of Wales. The trials test the ship’s capability to receive and launch aircraft whilst maintaining continuous air operations.

Defence Secretary Ben Wallace said: “The vital partnership between HMS Prince of Wales and our F-35B aircraft signifies a momentous milestone in the capability of the fifth-generation carrier, marking another step towards it becoming fully operational.

“The first jet landing is a huge achievement for all involved and showcases the collaboration across the UK Armed Forces and our impressive Carrier Strike capabilities.”

As announced by the Prime Minister last November, Defence has received an increase in funding of over £24 billion across the next four years, enabling our Armed Forces to adapt to meet future threats. Further enhanced by the commitments outlined in the Defence Command Paper, the F-35B is an integral air capability and HMS Prince of Wales marks a step change in the Royal Navy fleet as the second of the UK’s fifth-generation aircraft carriers.

The F-35B Lightning is designed to operate alongside RAF Typhoon aircraft and is jointly operated by the Royal Navy and RAF. It forms a central role within the UK’s Carrier Strike capability, already operating from HMS Queen Elizabeth and will be operating for the first time overseas as part of the Carrier Strike Group 21 deployment.

Commanding Officer of HMS Prince of Wales, Captain Darren Houston said: “This prodigious achievement on the deck of HMS Prince of Wales is a significant milestone in the Royal Navy’s re-birth of Carrier Strike Group operations. It is a tangible reflection of the enormous collective effort from the aircraft carrier enterprise to deliver the Royal Navy’s second aircraft carrier.

“I am particularly proud of the contribution made by my Ship’s Company in developing this world leading, sovereign capability and we look forward in earnest to rapidly growing our experience operating the F-35B through further trials and training later this year.”

“With all the training that we have previously undertaken with HMS Queen Elizabeth, we are now looking forward to using that experience and knowledge working with HMS Prince of Wales as she moves towards her full operational capability.”

HMS Prince of Wales left her home port of Portsmouth at the end of April to conduct operational training which has seen the ship operating alongside the F-35B aircraft, as well as helicopters from the Royal Navy, British Army and RAF. The F-35B aircraft are primarily based at RAF Marham and are the newest addition to the RAF’s fleet, able to travel up to 1,200mph.