RAF E-7 Wedgetail To Be Based At Lossiemouth 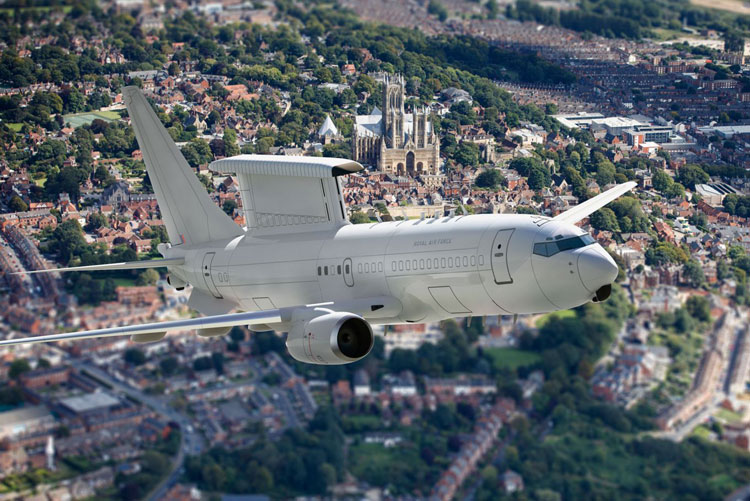 It has been announced the RAF surveillance fleet of E-7 Wedgetail and P-8A Poseidon aircraft will be co-located at RAF Lossiemouth in Moray.

Delivering a step change in capability from the current E-3D Sentry, the E-7 Wedgetail is capable of simultaneously tracking multiple airborne and maritime targets, using the information it gathers to improve situational awareness and direct assets such as fighter jets and warships. The Wedgetail has previously been used by the Royal Australian Air Force on operations against Da’esh in Iraq and Syria.

The Wedgetail will be co-located with the new Poseidon fleet, with the first four submarine-hunting aircraft already providing essential operational support in the area. Operating both fleets of Boeing 737 type aircraft from the same location will further harness RAF Lossiemouth’s strategic location and take advantage of the new £100m state-of-the-art facility and the recent £75m runway upgrade. The decision is also expected to support hundreds of jobs and provide a boost to the local economy.

Minister of State for Defence, Baroness Goldie said: “Scotland’s proximity to the waters and skies of the North Atlantic is of crucial importance to the UK’s and NATO’s security – this is why important military bases such as HMNB Clyde and RAF Lossiemouth are located here.

“Defence’s latest decision to base the E-7 Wedgetail at RAF Lossiemouth demonstrates our commitment to investing in Scotland, and will complement and expand upon the success of Typhoon fast jet and submarine hunting Poseidon operations.”

The arrival of the Wedgetail in 2023 will also mark a return to RAF Lossiemouth for 8 Squadron, after an absence of 30 years. RAF Lossiemouth is already home to half of the UK’s operational Typhoon fast jet fleet, which conduct Quick Reaction Alert (QRA) to protect the UK’s airspace, and complete NATO air policing duties on behalf of our allies.

Scottish Secretary Alister Jack added: “The UK Government has invested £470m in RAF Lossiemouth over the past two years, including a new £100m strategic facility, housing the UK’s new fleet of nine submarine-hunting Poseidon P-8A maritime patrol aircraft, which has been built by Elgin-based Robertson. Indeed this firm is also building the new shipbuilding hall for the Type 31 Frigate programme at Rosyth in Fife demonstrating just one of the many ways that UK Defence benefits Scottish business.

“The arrival of the Wedgetail capability in Scotland will provide clear additional security and economic benefits to Scotland. The Poseidon programme brought £470m UK Government investment in the coastal RAF base, creating and sustaining jobs and boosting the local economy. It is anticipated that basing the Wedgetail fleet will bring further investment and civilian and military jobs to Moray.”