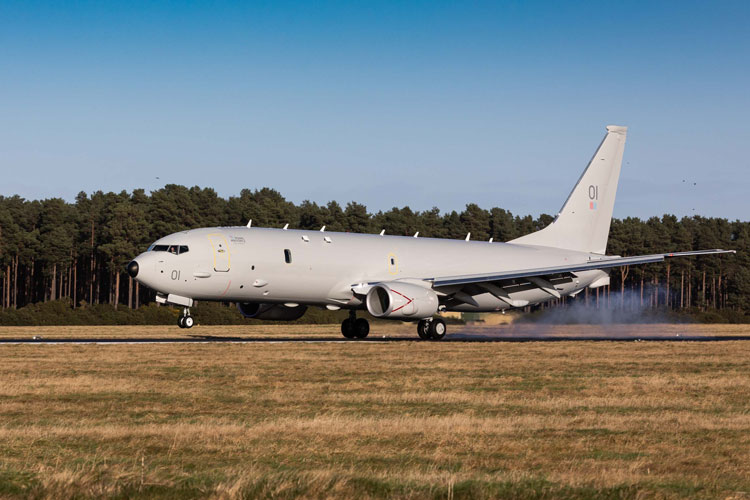 The RAF’s new submarine-hunting P8-A Poseidon MRA Mk.1 Maritime Patrol Aircraft has touched down for the first time in the UK at Kinloss Barracks.

RAF News Release, 04 February 2020: The RAF’s new submarine-hunting Poseidon Maritime Patrol Aircraft (MPA) has touched down for the first time in the UK. The aircraft is the first of a new £3 billion programme, including the purchase of nine state-of-the-art Poseidon jets, which will improve the UK’s ability to track hostile targets below and above the waves.

Poseidon aircraft will protect the UK’s continuous at-sea nuclear deterrent and be central to NATO missions across the North Atlantic, co-operating closely with the US and Norwegian Poseidon fleets. The UK’s purchase of the Poseidon is in response to increased threats such as Russian submarine activity in the Atlantic returning to Cold War levels, while China is also investing heavily in new Arctic facilities, infrastructure and ice-capable ships.

Defence Minister Anne-Marie Trevelyan, said: “Our Poseidon fleet will soon join an integrated UK force of fighter jets, ships, submarines, helicopters and highly-trained Royal Marines, ready to operate in Arctic conditions. The UK will not stand by if peace in the Arctic region is threatened.

“RAF Lossiemouth’s strategic northerly location makes it one of the most important air stations in the UK: already home to half of the UK’s Typhoon Force, and now sitting at the heart of our anti-submarine operations.”

The Poseidon is designed to carry out extended surveillance missions at high and low altitudes. The aircraft is equipped with cutting-edge sensors which use high-resolution area mapping to find both submarines and surface vessels. Each aircraft carries sonobuoys which are dropped from the aircraft into the sea to search for enemy submarines, surveying the battlespace under the sea and relaying data back to the aircraft. Poseidon will also be armed with Harpoon anti-surface ship missiles and Mk 54 torpedoes capable of attacking both surface and sub-surface targets.

Air Chief Marshal Mike Wigston, Chief of the Air Staff, said: “The Poseidon MRA1 is a game-changing Maritime Patrol Aircraft. I am delighted and proud to see the ‘Pride of Moray’ and her crews returning to maritime patrol flying from Scotland, working alongside the Royal Navy to secure our seas and protect our nation. Russian submarines have nowhere to hide.”

First Sea Lord, Admiral Tony Radakin, said: “The arrival of the first Poseidon marks a significant upgrade in the UK’s ability to conduct anti-submarine operations. This will give the UK the ability to conduct long range patrols and integrate seamlessly with our NATO allies to provide a world-leading capability. This will maintain operational freedom for our own submarines and apply pressure to those of our potential foes. I look forward to working with the RAF and our international partners on this superb aircraft.”

All nine UK Poseidons will be delivered to the RAF by the end of 2021 and achieve full operational capability from RAF Lossiemouth in 2024. The aircraft will be flown initially by 120 Squadron, the leading anti-submarine warfare squadron in World War 2, with 201 Squadron joining the programme in due course.

Named the ‘Pride of Moray’, the first UK Poseidon arrived at Kinloss Barracks, used previously by the RAF Nimrod MPA fleet, and now home to the Army’s specialist air support engineers, 39 Engineer Regiment. Poseidon will temporarily operate from Kinloss until October 2020 while £75 million of planned runway and taxiway resurfacing works is completed at Lossiemouth by the Defence Infrastructure Organisation. Routine Typhoon training will also temporarily relocate from Lossiemouth to Kinloss in June and July while the intersection of the runways there is resurfaced.

Michelle Sanders, DE&S P-8A Delivery Team Leader, said: “Seeing the first RAF Poseidon MRA Mk1 landing in the UK is an incredibly proud moment for all of the team at DE&S. Close, collaborative working with colleagues in Air Capability, the US Navy and industry has helped us deliver this very capable aircraft.”

Moray’s RAF Lossiemouth is one of the most important air stations in the UK: it is already home to four RAF Typhoon squadrons – half of the RAF Typhoon Force – and will become the centre of operations for the UK Poseidon fleet. UK defence is investing £470 million in upgrading RAF Lossiemouth’s infrastructure, including a new £132 million strategic facility for the Poseidon fleet, upgraded runways and operating surfaces, a new Air Traffic Control Tower, upgraded facilities for IX (Bomber) Squadron which moved to Scotland in 2019, new personnel accommodation, upgraded drainage and electrical supplies. When these developments are complete there will be 550 additional military personnel based at RAF Lossiemouth, taking the total number of military personnel employed there to 2,532.