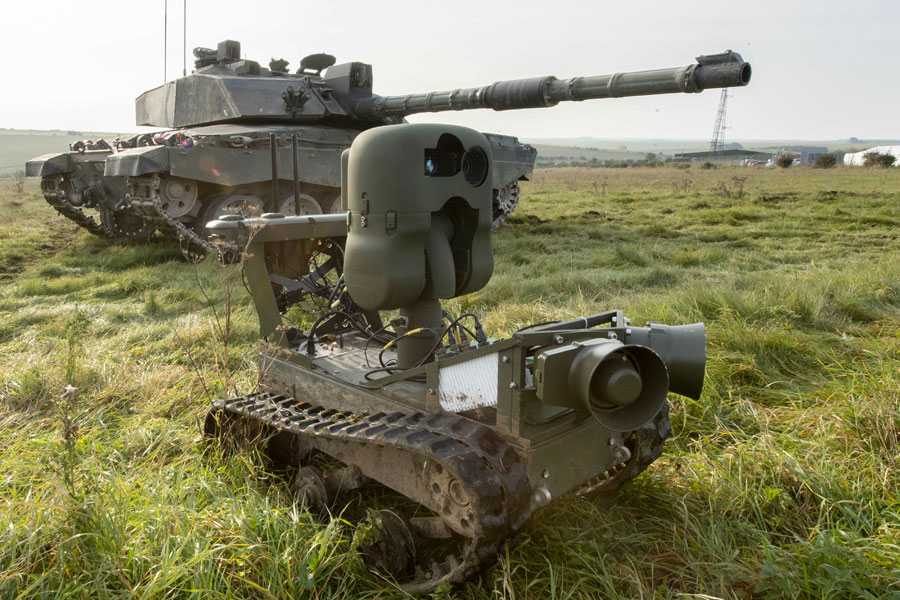 An X2 Unmanned Ground Vehicle on display at a capabilities demonstration at AWE20, seen with a Challenger 2 main battle tank in the background [Crown Copyright: Sgt Tom Evans]

MoD Press Release, Whitehall, 19 October 2020: Ground-breaking innovation will be at the heart of defence activity for generations, thanks to a bold new Science and Technology Strategy unveiled today by Defence Secretary Ben Wallace.

The strategy was launched with Chief Scientific Adviser, Professor Dame Angela McLean, against a backdrop of futuristic autonomous military kit, from UAVs that can fit in the palm of a hand to crewless all-terrain surveillance vehicles commanded remotely from a Challenger II tank and the new AJAX vehicle demonstrating ‘human machine teaming’ with an unmanned all terrain buggy.

Building on the UK’s rich heritage in science and technology, this new strategy will focus on finding and funding the breakthroughs that will shape the future, and ensure the armed forces are equipped to meet tomorrow’s threats. It will also have a renewed focus on data, including its capture and curation, which will underpin research to identify threat trends and deliver generation-after-next military hardware.

Defence Secretary Ben Wallace said: “We are in a very real race with our adversaries for technological advantage. What we do today will lay the groundwork for decades to come. Proliferation of new technologies demands our science and technology is threat driven and better aligned to our needs in the future.”

The pair visited Salisbury Plain ahead of the Army Warfighting Experiment (AWE), which this week will showcase some of the latest British-built military technologies.

Professor Dame Angela McLean said: “We need a clear focus on what we want science and technology to achieve. I will champion a challenge-led approach, based on trends across science, technology and the military, to set out what we need to be able to do in the future and how we can build towards it through our S&T activity.”

Minister for Science Research and Innovation Amanda Solloway said: “Placing science and research at the heart of the UK’s defence activity will unleash a new wave of innovation for our brilliant armed forces, equipping them to meet our greatest challenges. By backing our best and brightest scientific minds in every corner of the UK, we will ensure we bolster the security of our nation now and for decades to come.”

The Army Warfighting Experiment series allows the British Army to push the boundaries of technology and military technology, testing a range of prototype systems by putting them in the hands of the user while giving invaluable feedback to suppliers. This is all done to ensure that British troops maintain a continuous advantage over adversaries on the battlefield of today and tomorrow.

This complements the ongoing Integrated Review of foreign, defence, development and security policy. The Strategy & Technology will also be central to the government’s ambition for the UK to cement its status as a world leading science superpower, set out in its ambitious Research & Development Roadmap in July this year.

Editor’s Comment: As far as we can determine, no specialist independent defence journalists were invited to today’s S&T Strategy launch at AWE20 on Salisbury Plain so we cannot bring readers an unbiased report. Unlike the US Army, who invited us out to Yakima for their similar event last year, the British Army no longer invites independent defence media coverage….. even from card-carrying journalists!

We did watch mainstream news footage broadcast from Salisbury Plain this afternoon in the hope of possibly picking up some facts, but unfortunately the story run – complete with a Challenger 2 as a backdrop – concerned a Royal Navy officer who allegedly reported ‘drunk’ for duty on a nuclear submarine.

It is interesting to learn (see above) that a new AJAX IFV has been teamed with an Unmanned Ground Vehicle during AWE20, however it should be borne in mind that the Initial Operating Capability for AJAX has been delayed so it is likely to be quite some time before this ‘human machine teaming’ potential capability, if actually procured, trickles through to frontline troops.