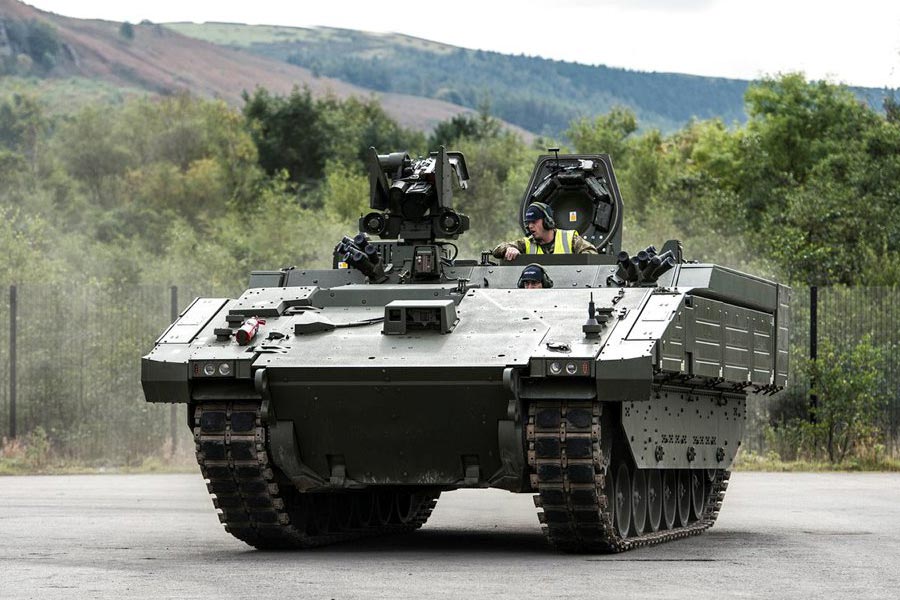 Library image of ARES variant of the AJAX at the General Dynamics’ factory in Wales, 18 September 2017 – no more recent news image was available from UK MoD at time of posting [Crown Copyright: Andrew Linnett]

The first ARES Reconnaissance variants of the AJAX family of armoured vehicles was last week delivered to the British Army’s Household Cavalry Regiment.

ARES, and the other variants in the AJAX family of armoured vehicles, will replace the Army’s Combat Vehicle Reconnaissance (Tracked) (CVR(T)) vehicles which have been the mainstay of armoured reconnaissance for almost fifty years. CVR(T) has proved itself on the battlefield in the Falklands and the in the deserts of the Middle East, but now requires a replacement to maintain the Army’s position as a top tier performer and to match the needs of the twenty-first century.

The AJAX family consists of ARES a troop-carrying reconnaissance vehicle, AJAX armed with a formidable 40mm cannon, support variants APOLLO and ATLAS, a command and control variant ATHENA, and an engineer variant – ARGUS.

ARES, part of the AJAX family of armoured vehicles, is being built by General Dynamics in Merthyr Tydfil, bringing hundreds of jobs and wider opportunities to Wales. The vehicles will give the Army’s Armoured Infantry and Strike Brigades a critical advantage over any likely opponent, through a combination of the latest technology, exemplary levels of crew protection, and, of course, our world-class professional soldiers.

Colonel Justin Kingsford, the AJAX Programme Director said: “This is an exciting moment for the Army. The delivery of ARES this week is an important step on our journey to give the Army an amazing state of the art, world beating Armoured Fighting Vehicle.” Describing the vehicle in greater depth, he went on to say: “AJAX will allow us to manage battlespace information faster from a modern digitised platform, with increased lethality through the new 40mm cannon. Better mobility, alongside enhanced protection levels and increased reliability underline the transformational nature of the capability. A comprehensive simulated training suite supports this fleet and ensures we invest fully in our crews to get the very best of this capability.”