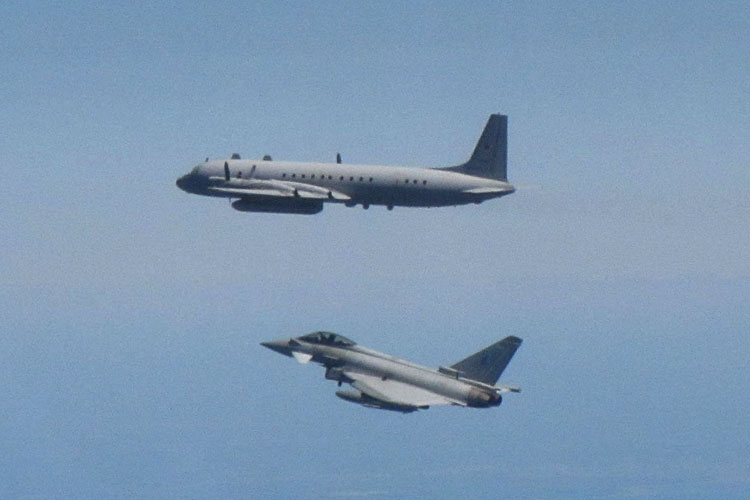 Image shows a Russian Coot A being intercepted by an RAF Typhoon from Šiauliai Air Base, during a QRA scramble on the 2nd Jun 2020 [Crown Copyright]

Press Release, 02 June 2020: Royal Air Force (RAF) Typhoon fighter jets deployed to Lithuania on a NATO policing mission have carried out their first intercept of a Russian Military Aircraft off the Baltic coast. The Typhoons launched on 2 Jun 20 to intercept a Russian IL-20 COOT Intelligence, Surveillance and Reconnaissance (ISR) aircraft operating over the Baltic Sea.

A Typhoon pilot from 6 Squadron, attached to 135 Expeditionary Air Wing, was on Quick Reaction Alert duty when the scramble was called. He said: “the scramble was called to intercept a Russian IL-20 COOT ISR aircraft. The initial scramble was a real shot of adrenaline, but once airborne it was important to remain calm and professional and make the intercept as expeditious as possible to ensure we maintained both the safety and integrity of NATO airspace. This is what all of our training is designed to prepare us for however, at the end of the day it’s just my job.”

This intercept is part of the routine NATO Air Policing mission that has been conducted to police the skies since 2004. The current RAF mission began on the 1 May when 135 EAW took over the enhanced Air Policing role working alongside the Spanish Air Force detachment at Šiauliai Air Base.

Wg Cdr Stu Gwinnutt, 135 EAW Commander offered: “It is great to see all of the training come together in a timely response and a successful NATO Baltic Quick Reaction Alert Air Policing mission.”

The RAF contribution to NATO deployments supports efforts to reassure our Allies and demonstrates the UK’s wider commitment to the security of the region.