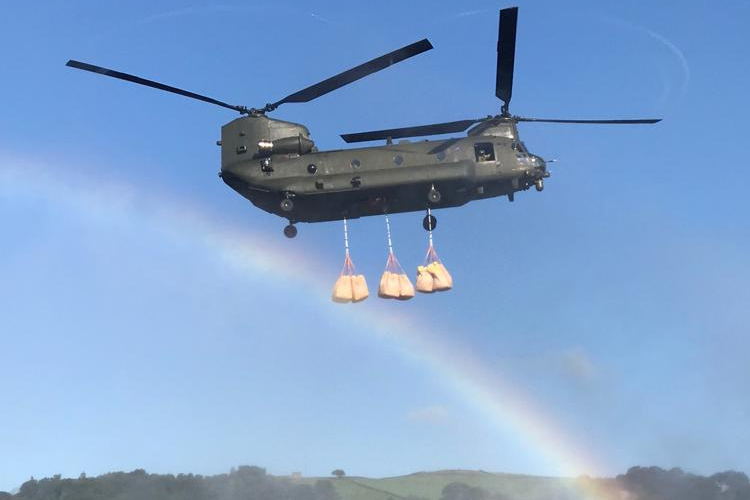 An RAF Chinook helicopter has deployed from to Whaley Bridge to assist civil authorities dealing with the emergency situation at Toddbrook Reservoir.

Minister for the Armed Forces Mark Lancaster said: “The Armed Forces continues to support local authorities in tackling the flooding we have seen across many parts of the UK.

“The rapid response of the RAF in deploying a Chinook helicopter will provide extra support in Derbyshire and we stand ready to assist in any way required.”

The RAF Chinook has already dropped approximately 150 tonnes of aggregate – a mixture of sand, gravel and stone – into Toddbrook and will continue to do so throughout the day. This is intended to stem the flow of water into the reservoir and into other surrounding watercourses designed for this purpose.

Wing Commander Gary Lane, the RAF liaison officer at the scene said: “Once the call from the civilian authorities came, we rapidly deployed an RAF Chinook and support crews to provide this vital support. We will continue to use the skills of our highly trained air and groundcrew and the astonishing lift capability of the Chinook to assist in ensuring the safety of the public.”

The Chinook’s crew were also accompanied by a joint helicopter support squadron deployed from RAF Benson and an RAF Regional Liaison Support Officer. This military support was requested and provided under the ‘Military Aid To Civil Authorities’ (MACA) process.