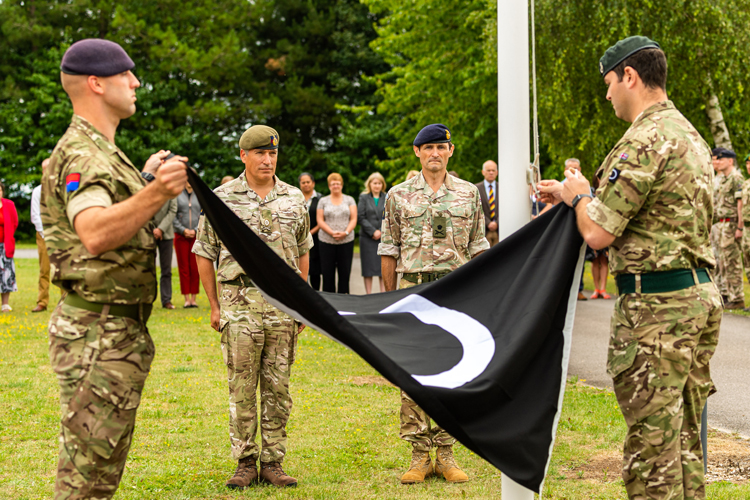 To mark the occasion of the re-designation of Headquarters Force Troops Command to Headquarters 6th [United Kingdom] Division, a formal flag raising ceremony took place at the flag pole in front of the HQ building at Upavon in Wiltshire, with Lieutenant General Ivan Jones CB, Commander Field Army (CFA) in attendance.

Following a short address by CFA, the FTC flag was lowered and the new 6 [UK] Division flag was raised. This occasion marked the rebirth of a Division which served throughout the First World War and during the Second War. More recently, the Division was reactivated, between 2008 and 2011, and deployed to Afghanistan as Headquarters Regional Command (South).

The reborn 6th Division will include: 1st Signal Brigade; 11th Signal Brigade; 1st Intelligence Surveillance and Reconnaissance Brigade; 77th Brigade; and the Specialised Infantry Group. This last brigade-level formation, first announced under SDSR 2015 and which it has recently been confirmed will have a Special Operations Capable role, will include: 4 RIFLES, 1 SCOTS, 2 PWRR, 2 LANCS and 3 RGR.

At a recent briefing on British Army restructuring, given to a small number of defence correspondents in MoD Main Building by a very senior officer, it was explained: “There is a gulf that exists between what our conventional forces are able to deliver and what out Special Forces are able to deliver. That is a void that needs to be filled.”

British Army, Featured, Special Operations Capable
You may also like