Tornado Farewell Flypast ~ Sorry If You Missed It! 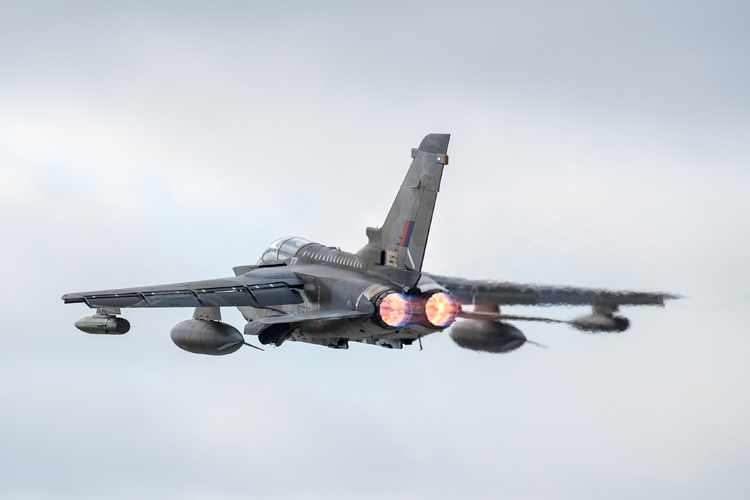 Over the last three days the RAF has conducted a series Farewell Flypast flights but unfortunately the Press Release announcing this was only issued last night.

With almost 40 years of Royal Air Force service coming to an end, the iconic Tornado jet is undertaking a series of finale flypasts around the UK. For three days starting this Tuesday [19th], members of the public will be able to see a formation of the long-serving fast jets undertake a tour of the UK that will overfly most RAF bases and other key sites associated with the aircraft.

Taking part in the flypast, the boss of IX(B) Squadron, Wing Commander James Heeps said: “It is a great privilege to be part of a national event that allows the public to say farewell to a brilliant aircraft that has been the cornerstone of our operations for so many years. It’s also a sad occasion because it will mean that from the end of next month the Tornado will never fly again.”

First entering service in 1979, the fast jets has been used in operations across the world, most recently bombarding Daesh to push the terrorist group back through Syria and Iraq. After over four years on Operation SHADER, on 5 February this year the aircraft finally returned home from operations for good.

Another of the formation aircrew who had recently returned from operations will be Wing Commander Matt Bressani, the boss of 31 Squadron, the other remaining Tornado formation. “The national response to the Tornado farewell campaign and the reception we received when we returned from operations earlier this month shows what a special place this aircraft has in the nation’s heart.”

In the immediate term, the Tornadoes will be replaced by new weapons capabilities for the Typhoon jet. Under ‘PROJECT CENTURION’, worth £425m over the past three years, the Typhoon now has deep strike cruise missile Storm Shadow, air-to-air missile Meteor and the precision attack missile Brimstone at their disposal. The RAF’s new fleet of F-35 Lightning jets will form the backbone of the UK’s combat air fleet alongside the Typhoon jets in the coming years. The Tornado will be officially retired from service at the end of March and will only be used for training purposes over the UK in the intervening period.

Nicknamed the ‘Tonka’, the aircraft’s first use in live operations was during the Gulf War in 1991, when 60 Tornado GR1s were deployed from bases in Saudi Arabia and Bahrain. Two years later they were upgraded to the GR4 model, which has been used ever since over the skies of Kosovo, Afghanistan, Iraq and Syria. Farewell Flypast, Featured, RAF, RAF Tornado
You may also like