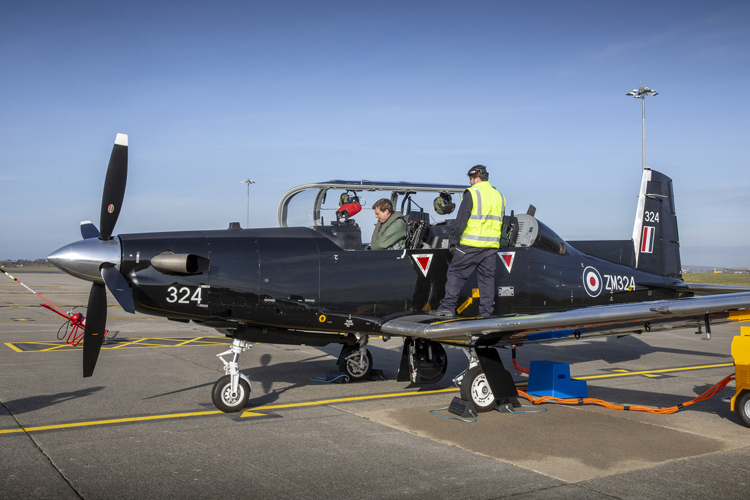 The first flight of the Texan T1 state-of-the-art training aircraft, which will replace the Tucano T.Mk 1 trainer, was completed at RAF Valley yesterday, 21 February.

RAF Press Release, 22 February 2019: The forthcoming introduction of this aircraft forms part of a £1.2 billion investment into fixed-wing aircraft training under the Military Flight Training System (MFTS), the evolving programme that is designed to train and prepare junior pilots for the frontline.

Defence Minister Stuart Andrew said: “It’s crucial that our fighter pilots of the future train on the very best equipment before reaching the front line to protect UK airspace at home and defend our interests abroad.

“The introduction of the Texan T1 into one of NATO’s most advanced Fighter Pilot training programmes demonstrates the RAF’s commitment to investing in world-leading technology to maintain a military advantage over our adversaries.”

The Texan T1 aircraft, due to replace the Tucano in the fast jet training programme, made history with its first flight at RAF Valley. The T1 represents a technological step-change from its predecessor, with the ability to simulate missions in both 4th and 5th generation aircraft such as the F35 Lightning and Typhoon fast jets.

Wing Commander Chris Ball, Officer Commanding the Texan Integration Squadron at RAF Valley explains: “Under the Military Flying Training System, fighter pilots will train on world-leading aircraft. They start on the Prefect, move on to the Texan and finish on the Hawk T2, making the training process more efficient and far more representative of the aircraft types they will eventually fly. The Texan is the ideal lead-in trainer to the Hawk T2 advanced jet trainer that they will fly here at Valley.”