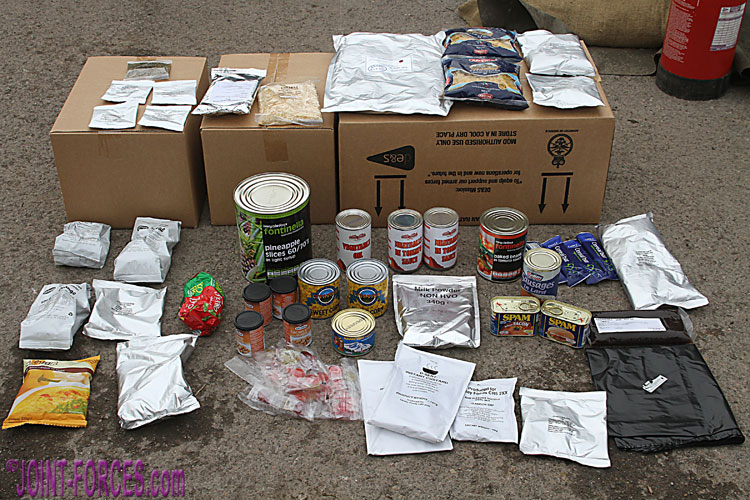 Further to us posting the original unused ration packs story on Monday (14th) the UK MoD has today issued this News Release with further details.

News Release, 18 January 2019: The Ministry of Defence has announced that it will donate thousands of unused ration packs to charities over the next few years.

Under the plans, the military will provide operational ration packs to FareShare, a charity who distributes food to nearly 10,000 UK charities, including community groups, homeless hostels and lunch groups for the elderly. The ration packs are enough to sustain ten soldiers for a 24 hour period and include items for breakfast, lunch and dinner, such as porridge, sausages, baked beans, pasta and rice. The range of ingredients enables the preparation of nutritionally balanced meals and provides 4000 calories to sustain an active person over a 24 hour period.

Minister for Defence People and Veterans Tobias Ellwood said: “Ration packs help provide nutritionally balanced meals to our armed forces on operations around the world. But charity begins at home, and I’m pleased our partnership with FareShare will make sure no food goes to waste.
“FareShare does a fantastic job redistributing food across the country and I’m proud the military can support communities in this way.”

The ration packs donated by the MOD will help the recipient charities save on food bills, allowing them re-invest money into essential support programmes. Around 2 million ration packs are used by the military every year, with less than 1% of the MoD’s stock requiring disposal. This scheme means that when it becomes clear a batch of ration packs can’t be used, there is an opportunity to gift to those in need and ensure that any good food does not go to waste. The MOD is committed to keeping disposals to an absolute minimum, and this scheme will help reduce these even further.

The operational ration pack provides a two course breakfast, lunch and a three course dinner, as well as a number of drinks, both hot and cold. Once transferred from the MOD, FareShare will distribute them to their UK-wide charity network.

Roger West, Director Logistic Delivery Operating Centre at Defence Equipment and Support (DE&S), the MOD’s procurement organisation, said: “I am delighted to be able to provide support for this important issue.
“This solution will deliver food products where they are needed while also minimising waste. Our Corporate Social Responsibility is important to us and we continue to explore ways to do more; this is the right thing to do.”