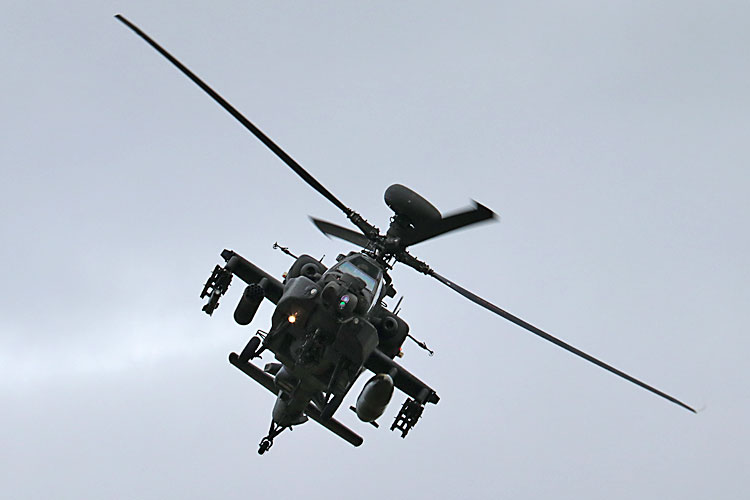 The MOD has awarded a five-year, multi-million-pound deal to Leonardo Helicopters (UK) for the support of the existing fleet of 50 Apache attack helicopters.

News Release, 17 January 2019: Defence Minister Stuart Andrew announced the £293 million contract with Leonardo Helicopters during a visit to the company’s site in Yeovil where some of the vital work on the aircraft will take place. The Apache AH Mk1 Integrated Operational Support (IOS) contract will maintain the fleet until it’s out of service date in March 2024.

The Apache MK1 is being incrementally replaced by the latest Apache AH-64E aircraft that will begin entering service with the British Army in 2022. The new AH-64E model will have improved sensors and avionics as well as greater performance that will enable the Army to sustain its battle-winning capabilities in future operations.

Defence Minister Stuart Andrew said: “The Apache has provided years of crucial battlefield support to UK and coalition troops in operations in Libya and Afghanistan. This multi-million-pound contract will ensure our Armed Forces continue to benefit from this vital capability as we integrate the latest Apache model into service in 2022.” The IOS contract secured by Defence Equipment and Support, the MOD’s procurement agency, includes deep maintenance, repair and overhaul of the MK1 aircraft as well as the provision of technical and spares support. The contract has been awarded in three tranches, to maintain value for money, with this latest investment covering the final five years of the fleet in service.

This contract reaffirms the MOD’s committed investment in Leonardo’s Yeovil site. Last May, the MOD announced the delivery of the first Commando Merlin Mk4 helicopters designed for Royal Marine aircraft carrier operations. This saw the fruition of a £388 million contract supporting 175 skilled jobs in Yeovil and a further 500 across the UK supply chain. The MOD also provides Leonardo with the £271 million Wildcat support and training contract securing 500 jobs in Yeovil.

The South West benefits from MOD expenditure of £920 per person each year and a huge investment in local industry and commerce of £5.1 billion. Defence spending in the region supports one in every 60 jobs – the highest proportion of jobs supported by MOD expenditure in the UK, totalling 33,500 jobs.

Director Helicopters at Defence Equipment and Support, the MOD’s procurement agency, Graham Russell said: “This latest multi-million-pound investment in the existing Apache fleet not only demonstrates our positive collaboration with industry in achieving value for money, but also ensures that these battle-proven helicopters remain in-service and readily available for the British Army until their out of service date.”