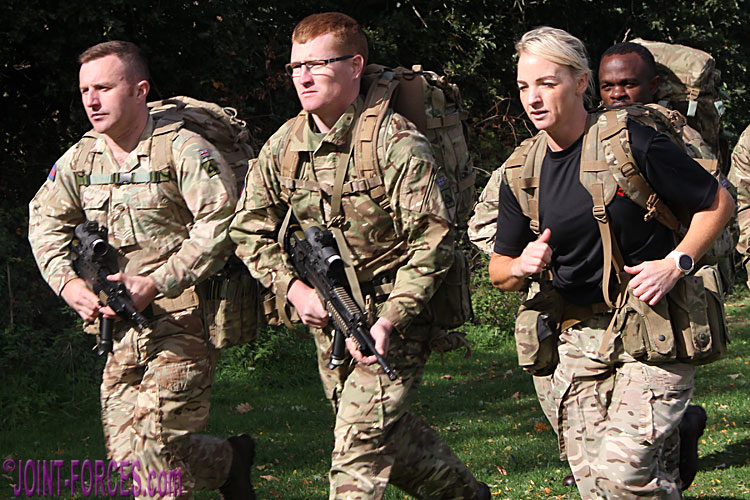 There was much chattering on t’internet over the weekend following mainstream media coverage of this event but one thing many of those who commented adversely seemed not to spot was that this new test is only for troops in the Ground Close Combat role. The close combat PES (Physical Employment Standards) is just one of three new tests which will replace the now 20 year old AFT (Annual Fitness Test) and PFA (Physical Fitness Assessment) system and, as its name suggests, it is only intended for the Infantry and the Royal Armoured Corps plus supporting troops, such as say RAMC Medics and Military Working Dog Handlers, likely to be going into close combat situations alongside them.

All three of the new PES tests, including entry level standards for new recruits and more general standards for the rest of the Army, should be in place next year (2019) but the Ground Close Combat element is already rolling out as the Royal Army Physical Training Corps (RAPTC) starts to train its trainers. To comply with legislation these new tests are not age-specific or gender-specific, but irrespective of age or gender only those who are sufficiently strong and fit to pass the Ground Close Combat standards will qualify for service in units tasked for this role; the new tests are clearly not some “watering down of the old AFT and PFA to suit girls” as some dinosaurs have been ranting on t’internet.

For those unfamiliar with them, the AFT and PFA which every soldier currently undertakes annually (as MATT 2) consist of: covering eight miles (approximately 13 kilometre) in under two hours in combat gear carrying between 15kg and 25kg, dependent on cap badge with males and females carrying the same load plus their personal weapon; and a set number of push-ups and sit-ups, determined by gender and age, plus an aerobic test. The new Close Combat standards, determined over three years by the RAPTC in close cooperation with a team of experts from Chichester University, and representing tasks soldiers might expect to undertake going into and during close combat, consist of:-

All six tests, carefully and scientifically designed to reduce the amount needless training injuries, need to be undertaken during a single session lasting no more than three hours (this time-frame is to allow a group to use the same equipment). As readers may have spotted, the tests represent a TAB (Tactical Advance to Battle) followed by an assault on an enemy position, a casualty (70kg soldier with 40kg of kit) recovery to a position of cover, a two-person stretcher carry to quad or helicopter, extraction of a casualty through a vehicle roof hatch, and loading 20 filled sandbags or ammo boxes etc. onto a vehicle loadbed after carrying them 30 metres apiece.

Comparing the old AFT and PFA with the new PES, WO1 Gavin Paton, the Field Army Sergeant Major, told assembled media at Aldershot last Friday: “I’ve got plenty of combat experience. I’ve never done a sit-up on the battlefield, but I have dragged casualties. I’ve never done a push-up on the battlefield, but I have been expected to lift and carry repeatedly.” He also stated: “The new stuff is representative of what I need our soldiers to do.”

The Warrant Officer, who is the Commander Field Army’s direct link with the soldiers, joined the Army just before the old tests were introduced in 1998 and since than has racked up 21 years infantry experience, has trained recruits as an instructor at ITC Catterick, has trained officers as an instructor at RMA Sandhurst, has been sergeant major of a Regular battalion and has seen combat in both Iraq and Afghanistan with two tours apiece. He has done the new tests himself and says they are “very, very good and they are very representative of what we need for Ground Close Combat”. He also continued “The PFA and AFT is not a bad test. It’s just time to change. The threat has changed. Ground Close Combat has changed. We must make changes.”

Talking with specific reference to age and gender and explaining the need for a separate GCC PES, Sergeant Major Paton said: “Ground Close Combat must be one standard. The enemy doesn’t care. The situation doesn’t care. You can either do it or you can’t do it. It’s not role-specific. One size does not fit all. What I do in the Infantry is very different to what somebody will do in the Royal Signals, so one size for physical fitness and standards does not fit all.”

The JOINT-FORCES.com team are not serving infantry soldiers so we are not in a position to quantify whether or not the new system is better, worse or just different. However having covered the UK teeth arms for 30 years, i.e. for a decade longer than even the current system has been in place, in my personal opinion the new PES for GCC troops is certainly no watering-down of requirements.