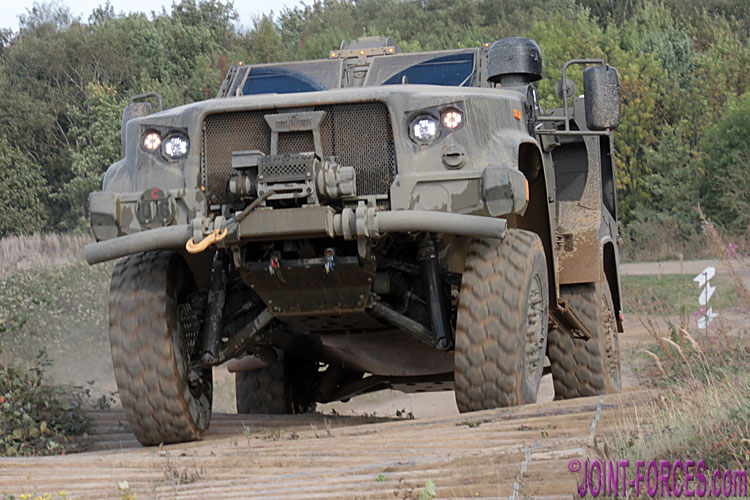 The road to Multi-Role Vehicle-Protected or MRV-P, like many UK Defence Procurement programmes, has been long and rocky… and the end is still not quite in sight. Born out of the cancelled c.2003 OUVS (Operational Utility Vehicle System) programme to find a light armoured vehicle family to ultimately replace a wide range of in-service utility vehicles operating on or close to the front line, MRV-P was one of four new vehicle projects announced in late November 2013. 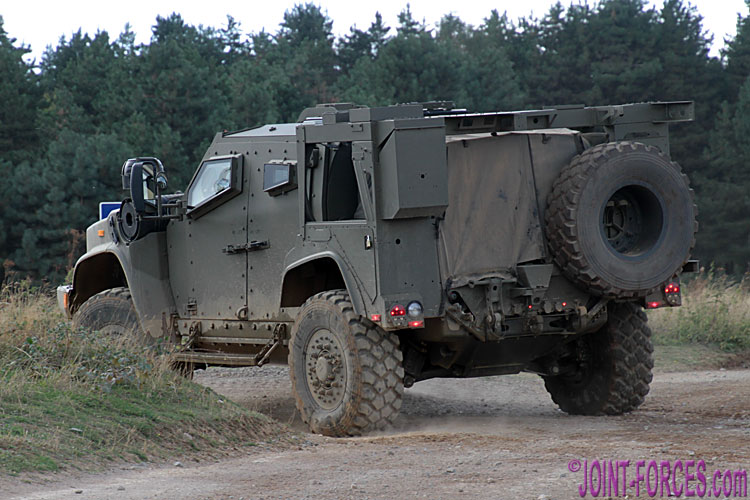 According to the Prior Information Notice: “Multi Role Vehicle – Protected (MRV-P) is a Cat A project intended to meet the requirement for a protected deployable platform employed by all Force Elements, at all scales of effort, in a wide range of environments, and on all parts of the battlefield except for the direct fire zone. The MRV-P should bring commonality to the fleet and reduce the logistic footprint for utility vehicles by 2020.” 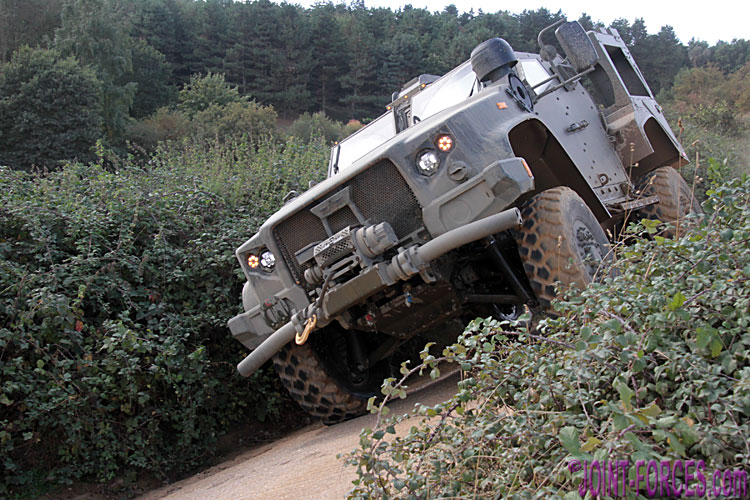 Green JLTV negotiating the side slope at Millbrook [© BM]

MRV-P was subsequently split into two phases or packages, with Package 1 being the smallest of two categories of wheeled vehicle and intended primarily to carry small specialist teams of four or less, including driver, plus an external payload behind the crew cab. It is believed several different in-service vehicle types, some procured as Urgent Operational Requirements, are likely to be replaced by MRV-P Package 1 if/when it is ordered including: Land Rover R-WMIK, Land Rover ‘Snatch’ VIXEN, Pinzgauer 6×6 VECTOR, Iveco PANTHER, International HUSKY TSV. 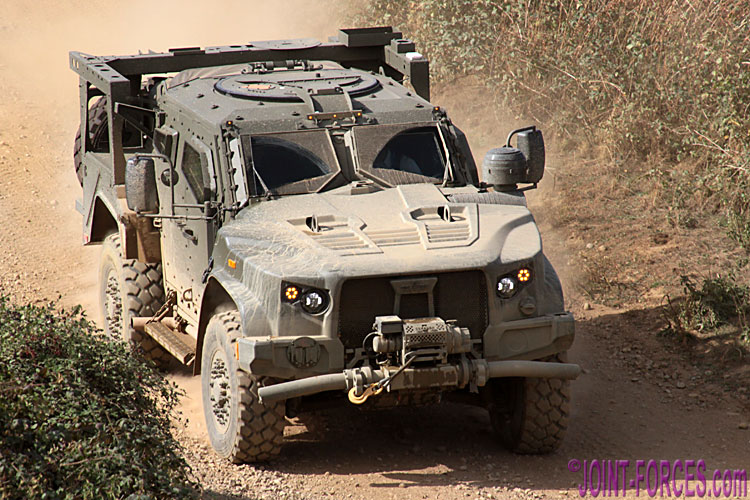 Green JLTV at speed around the rough road course [© BM]

On 13th April 2018 the then Parliamentary Under-Secretary at the Ministry of Defence, Guto Bebb, replying to a Written Question from Shadow Secretary of State for Defence, Nia Griffith, answered: “The Multi-Role Vehicle – Protected (MRV-P) programme is being delivered in two packages. For Package 1, the Command, Liaison and Logistics vehicles, the Joint Light Tactical Vehicle manufactured in the United States by Oshkosh has been identified as the preferred option, with the US Department of Defense Foreign Military Sales acceptance letters expected to be signed shortly. Package 2 will provide the Troop Carrying Vehicles and Future Protected Battlefield Ambulance, and is currently the subject of an ongoing competition, with a decision expected in early 2019.” 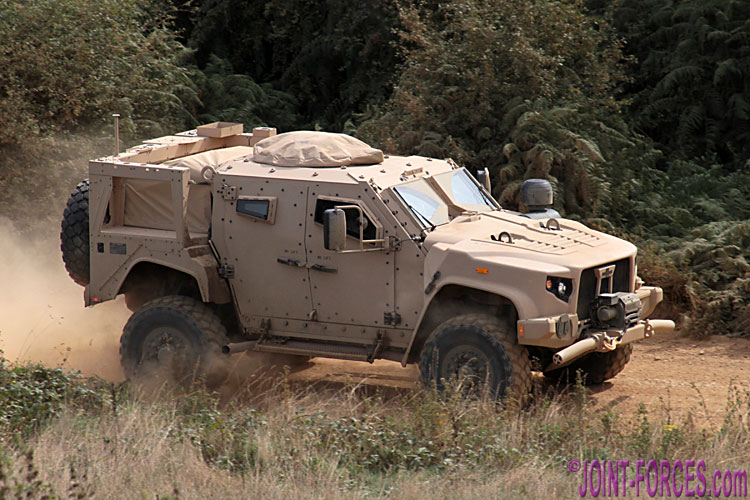 In September 2017 at the biennial DSEi expo in London a NATO Green Oshkosh JLTV configured for British Army requirements appeared on static display and at the beginning of this year the same vehicle was put through trials on the off-road courses at Millbrook Proving Ground in Bedfordshire (see video below, reproduced here with permission). In September, at Defence Vehicle Dynamics 2018, this vehicle and a sand coloured example which had previously been displayed at DVD, were both put through their paces at Millbrook with interested military and industry passengers on board. 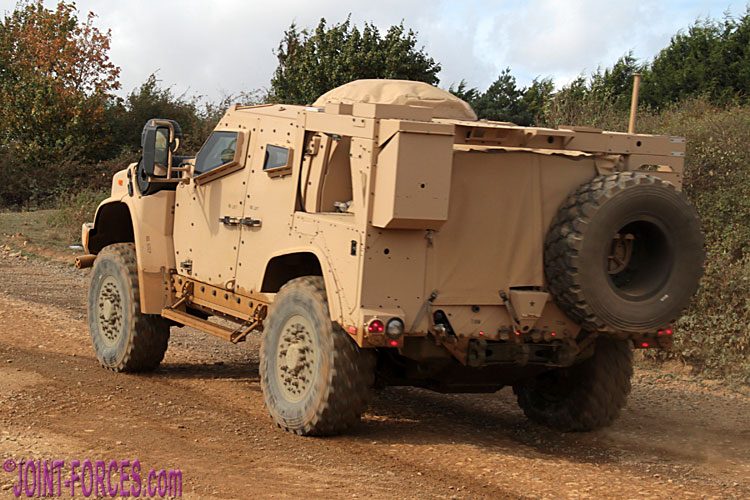 Cab is armoured but cargo area is not [© BM]

Incidentally, there has been some speculation that JLT-V might replace FOXHOUND but this is highly unlikely as the latter is a six-seat Light Protected Patrol Vehicle used as a personnel carrier by the Light Role Infantry Battalions; it is more likely that MRV-P Package 2 would replace it if this project bears fruit. We plan to look at FOXHOUND in another feature in early October.

Footnote: Specifications for the UK-configured JLTV have not yet been announced but generally they should be very similar to the US Army & USMC M1280 JLTV-GP variant ordered in 2015 and currently in Low Rate Initial Production.