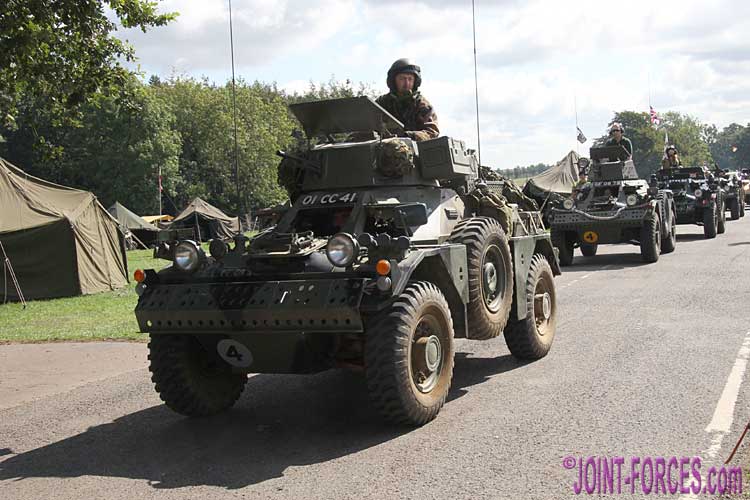 The last of the big UK living history shows of the summer holidays opened its gates this morning at the Kent County Showground near Maidstone, writes Bob Morrison.

Held on the site of the old RAF Detling wartime airfield, Military Odyssey is a multi-period event covering over 2,000 years of military history from the Hoplite warriors of Ancient Greece through to the combat soldiers of the early 21st Century. In addition, a plethora of military surplus traders and specialist suppliers covering a multitude of periods set up stall for the three-day August Bank Holiday weekend to cater for collectors, re-enactors and enthusiasts.

JOINT-FORCES.com arrived on-site just after opening time, courtesy of a couple of former Belgian Para-Commando enthusiasts giving a lift from our digs, and immediately commenced visiting our friends in the trade before their stands became too busy. Naturally the guys at East-West Trading were one of the first ports of call (deliberately early to avoid being dragged into the marquee bar next door) where a fair bit of time was spent perusing the racks and stacks of rare and specialist camo uniforms – where else can you find Bulgarian combat jackets nestling alongside British Army red tunics?

By afternoon the re-enactors were hard at work educating and entertaining the crowds with realistic displays and battles. Normally focus is on the modern warfare set-piece battles, but in recent years at Detling more and more groups specialising in earlier periods have become just as professional as the more famous WWII groups and some of these are now rivalling the main battlefield participants with their spectacular displays. Regia Anglorum recreate part of the 1014 Battle of Clontarf [© BM]

Incidentally, on Bank Holiday Monday serving UK military personnel get free admission to the show on presentation of MoD 90 ID. To learn more about the spectacular show and the groups attending go to military-odyssey.com Looking for a pair of pre-loved UK combat boots? Several traders had displays like this. [© BM]