Gulf of Aden Clasp To Be Awarded To Sailors 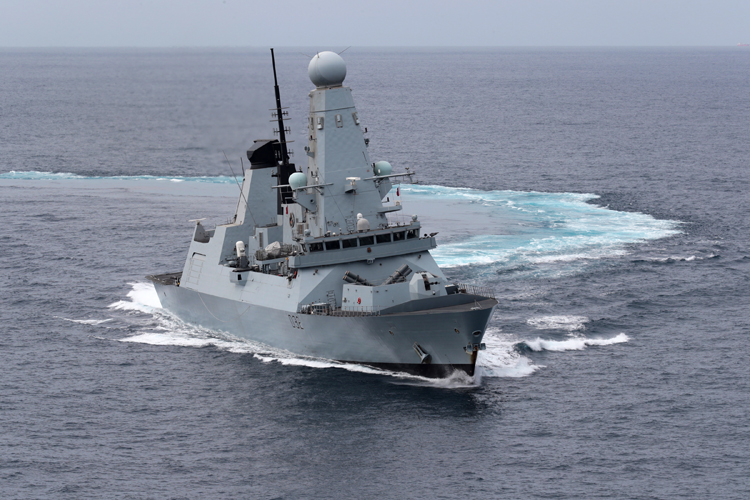 Royal Navy sailors who braved the threat of missile attack to protect merchant ships in the Middle East will be awarded a new medal clasp, it has today been announced.

Royal Navy News Release, 19th August 2018: Her Majesty The Queen has agreed a new clasp, the Gulf of Aden Clasp, will be introduced for those who served on board Type 45 destroyer HMS Daring during a period of significant threat in the Bab al-Mandeb strait in 2016.

The intense mission began after an attack on a merchant vessel, the MV Swift, off the coast of Yemen in October 2016. Portsmouth-based HMS Daring was already headed to the area at the start of a nine-month deployment on maritime security operations.

The destroyer and her 260-strong crew then conducted 20 patrols of the area threatened by land-based missiles and explosive boats in the hands of Houthi rebels. With the ship’s advanced surveillance radar and Sea Viper missile system, they ensured the critical choke point for world trade remained free flowing.

Defence Secretary Gavin Williamson said: “Maritime trade is the lifeblood of Britain’s economy and the Royal Navy plays a key role in protecting important trade routes. The extraordinary achievements of HMS Daring‘s ship’s company, under constant missile threat, is a testament to the skill and bravery of the men and women of the Navy. “Their award of the Gulf of Aden Clasp is thoroughly deserved and they should wear it with pride.”

HMS Daring‘s crew operated for 50 days under threat of attack, safeguarding 800,000 tonnes of merchant shipping. Each transit of the chokepoint was conducted at the highest degree of readiness.

Sailors and Royal Marines who were on board at the time will be awarded the clasp, which is worn with the General Service Medal, later this year. Those who do not already possess the medal will be awarded it.

Commander Phil Dennis, who was the Commanding Officer of HMS Daring at the time of the operation, said: “This is wonderful recognition of the immense efforts of my team in HMS Daring during such a vital mission which ultimately helped protect Britain’s economy and safeguard world trade.

“There was a significant and viable threat from both surface and air attack at the time, but throughout that threat my team performed brilliantly, calling upon their world-class training to rise to the challenge.

“This achievement shows how capable the Royal Navy’s Type 45 destroyers truly are, having successfully defended hundreds of thousands of tonnes of merchant shipping with sensors and weapons.”

Around 95 per cent of Britain’s economic activity depends upon the sea and a vast amount of global trade passes through the choke point of the Bab al-Mandeb strait.

She later accompanied the significant amount of merchant shipping through the narrow lanes of the southern Red Sea and Bab al-Mandeb strait. Several other Royal Navy ships have since maintained patrols and maritime security duties in the region since the threat has de-escalated.

Type 45 destroyers are part of the backbone of the Royal Navy, defending the fleet from air attack with their state-of-the-art equipment. They will form a vital component of the UK’s carrier strike task force when HMS Queen Elizabeth and HMS Prince of Wales begin their operational deployments.