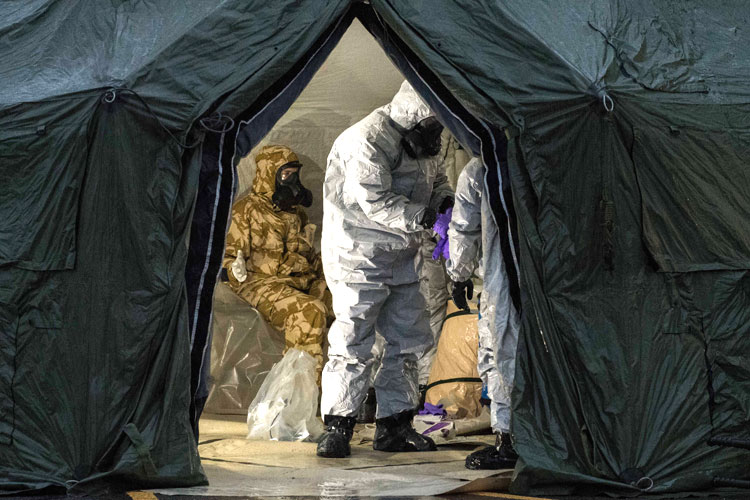 Sergei Skripal a former Russian Intelligence Officer of the GRU (Russian military intelligence) who was also a Covert Human Intelligence Source (CHIS) for Britain’s MI6 was poisoned in Salisbury, as was his daughter, with the nerve agent Novichok on March 4th; this was the first recorded use of a nerve agent in Europe since WWII.

Both victims are still in critical condition, writes JF Security Consultant Robert Shaw, and the attack has started a diplomatic row between the UK and Russia. A detective responding to the breaking emergency, Nick Bailey, was also exposed and is seriously ill. The incident has led to Counter Terrorist Police now investigating 14 other deaths of Russians in the UK over the last two decades in case previous deaths have been state sponsored murder. But why would Russia poison a former intelligence officer years after he had escaped to the West and how serious is the row?

Sergei was recruited by Spanish Intelligence whilst he was stationed there with the prospect of earning money from a business concern. During the Cold War, one motivation for Soviet agents to work for Western Intelligence was ideology (although all CHIS were paid money for their information as well). After the Cold War, motivation to spy for the West was more for financial gain and this was the case with Skripal. The Spanish turned him over to MI6 and he became a successful CHIS, being paid by them into a Spanish bank account until he was betrayed by a Spanish traitor and arrested by Russian Counter-Intelligence. He was given a reduced prison sentence of 13 years in light of his cooperation with his interrogators and his ill health.

The spy’s sentence was cut short when he was exchanged with Russian intelligence officers that were arrested by the FBI in America, one of which was the famous ‘Anna Chapman’. Like all UK agents that have been compromised and are extracted Sergei and his family were then relocated to the UK, debriefed and given UK citizenship.

Although the policy of the UK has been to imprison UK nationals that have been, or are, working for a foreign intelligence service (so that they can be exchanged at a later date for our own compromised agents) this has not been the case with the Russians, who have a history of executing their traitors after interrogation and a trial. Also, in the past the Soviet and Warsaw Pact intelligence services had a policy of assassination and were responsible for a various murders in Europe using means such as Cyanide gas and Ricin. Although the Soviets later stopped assassinations due to the high risk of compromise and the subsequent political backlash, somebody may have reversed that policy and there is a perception that the murder and attempted murder of political opponents in Russia and abroad is happening again. One recent era attack was the poisoning of the Ukrainian opposition leader Viktor Yushchenko, with Dioxin on his food in 2004.

This latest attack, years after Sergei had been exchanged, will send a message to Russian intelligence officers that might become potential CHIS for the West that even if you aren’t executed shortly after being compromised and caught at some point of Russia’s choosing it can, and will, reach out wherever you are and kill you. This might make it harder for Western Intelligence agencies to recruit Russian CHIS in the future if they feel they cannot be protected even in UK years after being extracted, granted citizenship and given a new identity.

It also shows that the Russian policy of ambiguous warfare will be used to try and confuse the West as to who carried out the attack, as Russia has stated that the Novichok was an old Soviet agent that could have been used by any former country of the Warsaw Pact. Russia has denied carrying out the attack and have asked for a sample of the agent examined by the Defence Science and Technology Lab (DSTL) at Porton Down but the UK has refused as they are concerned that the Russians will contest any Western findings in an attempt to confuse the issue and could use the sample to discover why the victims did not receive a fatal dosage.

Prime Minister Theresa May has expelled 23 Russian diplomats from the UK, will boycott the forthcoming World Cup and will disrupt Russian money laundering in the UK but will not carry out a cyber attack on Russia as our critical national infrastructure is extremely vulnerable to any retaliatory attack. The Russians can also influence European governments over their response through being their supplier of gas. The UK has o’t the capability for any military response and NATO will not start a conventional war with Russia over a former Russian spy, so it is more likely that in time the matter will become old news and President Putin’s popularity will rise in Russia following the elections as he appears as a strong leader willing to strike Russian traitors.