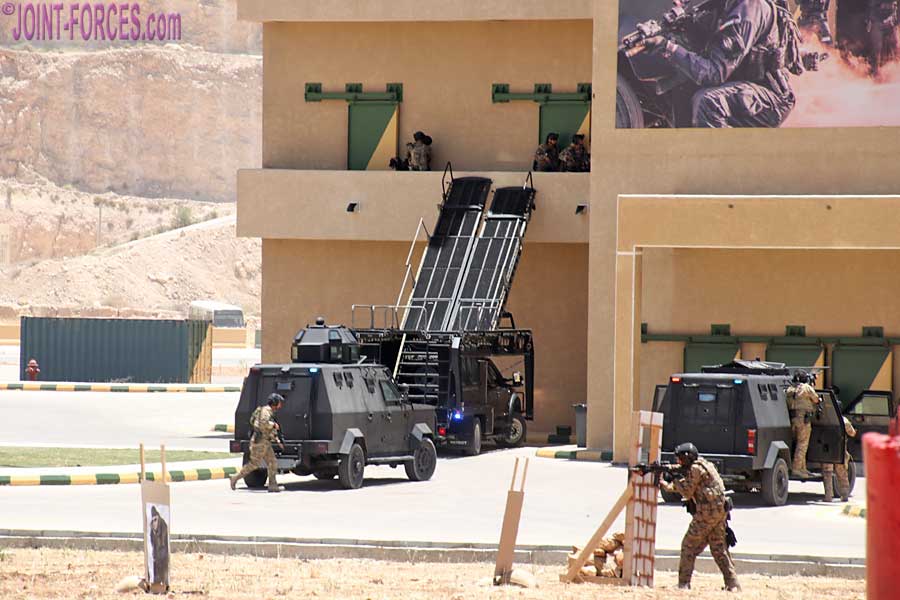 The 12th Annual Warrior Competition, postponed from 2020 by the COVID-19 pandemic, recently concluded at KASOTC in Jordan, reports Bob Morrison.

A quick explanatory intro: A bit of a logjam generated by the rescheduling and rapid restart of pandemic-postponed events quite severely tested our logistics as BSDA 2022 in Romania, HEMUS 2022 in Bulgaria, 12th AWC in Jordan and EUROSATORY 2022 in France all needed to be covered by your roving scribbling snapper between 18th May and 18th June. For much of this frenetic month my priority was taking photographs and gathering info, while still daily uploading fresh news content to the website of course, but now that the pace of life has slowed down a little bit and I have downloaded and backed-up a mountain of images, I am back in front of my desktop computers (and mostly recovered from a rather severe and unexpected bout of tree pollen hay-fever contracted on my return to the UK) generating fresh features. The first of these is an overview of 12th AWC with a list of all 40 teams, plus final standings for the Top Ten Teams after five days of extensive and gruelling competitions across most of the live-fire ranges and facilities KASOTC (King Abdullah II Special Operations Training Center) is able to offer to elite military and police SpecOps teams.

First the Teams ~ note that Team Numbers allocated for the events were pulled from the hat and do not represent either list order or alphabetic order:-

As can be seen, to derive maximum training value some countries sent more than one team ~ either from the same elite unit of from different specialised units (e.g. ‘black’ or ‘camo’) ~ but each team was a separate entity and personnel could not swap between teams. There were seven Competitors on each team, of which five participated in every event, plus a non-competing Team Leader.

After the official Opening Ceremony on Day One, and a brief break for lunch at the KASOTC dining facility, the competition phases commenced with the BDT (Beretta Defence Technologies) TOP SHOT challenge. Teams were paired into twenty sets to compete head-to-head and against the clock on the short distance ranges using pistol, rifle and shotgun. One team from each pair was declared winner and moved onto the next round to compete against another winning team with ten sets now battling it out. This elimination process continued throughout the afternoon, under a baking midsummer sun, until eventually just two teams were left to shoot it out. We will look at the BDT TOP SHOT event in a separate feature a little further down the line.

Day Two started at silly o’clock with the SCHADENFREUDE event, where competitors were tasked with negotiating a long-range movement as a uniformed team carrying rifles and a 22kg rucksack, navigating around several predesignated points with just a a 1:6000 map. A time limit of three hours was set for this event and only three teams successfully accomplished this in the given time. Again, we plan to pen a more detailed feature on this event in due course.

In the afternoon of Day Two all teams had to complete the F4 300M LOMAH Relay, which required them to engage targets with both team weapons (2x sniper systems and 5x team rifles) as well as additional weapons provided by KASOTC. Just seven minutes was allowed for completion of the relay with points awarded for every target dropped, at ranges between 250 and 300 metres, during the limited periods they were revealed to the shooters. Ammunition was limited to ensure accuracy over weight of fire.

The ASYLUM event on Day 3 really ramped things up, as first the teams were required to assault an Airbus 300 to eliminate terrorists (having first converted their sidearms to fire Simunition rounds) and capture information relating to location of a HVT (High Value Target) in the immediate area. Once the HVT location (inside a medium rise building) had been ascertained they then had to enter and eliminate using live rounds in their primary weapons. On safety grounds, we understandably could not be inside the building, but we were granted special dispensation to be inside the Airbus while three teams took down targets with non-lethal marker rounds. [My Revision Sawfly eyepro came in very handy here, and if I had not been carrying this I would not have been allowed inside the fuselage during the take-downs.]

On Day Four the two events were URBAN ASSAULT and THE FULL MONTE, with teams being split into sets of 20 to undertake one in the morning and the other in the afternoon. URBAN ASSAULT required the team members to climb to a high vantage point and engage long range targets with their sniper systems before racing down into the valley to patrol though a town, engaging pop-up targets in windows and doorways. As live rounds were being used in the town this was not an easy one to cover, but we were allowed to follow on inside the safety vehicle behind a couple of the most experienced teams to get a handful of unique images. THE FULL MONTE also involved both long and short range shooting, with the teams ascending the Commando Tower to engage with rifles and sniper systems before abseiling to the foot of the tower and racing to the pistol range to take down more targets against the clock. I stayed at ground level for this one as I am at least two, and in some cases three, times the age of the elite Operators who competed in these events and I really didn’t want to cause more work than necessary for the medics in attendance on the ranges.

Suddenly the week was almost over and it was time for the Top Ten Teams to tackle THE KING’S CHALLENGE to determine the eventual winners. This final event is a test of speed and agility which requires the teams to race around the many ranges spread out around KASOTC, engaging numerous targets with all weapons at their disposal. The actual tasking read: “conduct a long-range movement, negotiate all obstacles, eliminate all enemy personnel, and reach the extraction point.” Enough said? If not, I plan to take a closer look at this ultimate challenge in a few articles’ time.