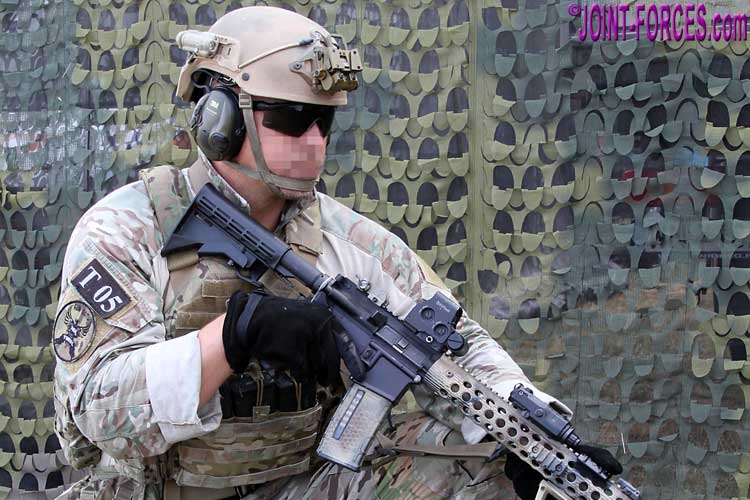 The accompanying photographs of a Hungarian Spec Ops trooper from the elite 34 Bercsényi László Battalion were taken on Exercise ANAKONDA 16, writes Bob Morrison.

Once the helicopters had landed and the dust had settled at the end of a NATO Combined Special Operations air assault on the edge of Poland’s Drawsko Pomorskie Training Area, during ANAKONDA 16, it quickly became apparent that the fourth multiple taking part in the multinational demo had primarily comprised Hungarian Special Forces operators.

Following a hastily arranged group photo just after the Special Operations dynamic display, on the Polish airfield near Oleszno, the Hungarian operators moved off to one side to be addressed by a brigadier from the Distinguished Visitors party. Afterwards one of the team kindly agreed to allow me to photograph him before the guys were whipped away and from his insignia it was obvious that he belonged to 34th Special Forces Battalion from the recently amalgamated 2nd Árpád Bertalan Special Purpose Brigade. Although some reference sources say 34 Battalion is a Special Operations unit, official Hungarian Government documentation gives its full name in English as being Hungarian Defence Forces 34th László Bercsényi Special Forces Battalion and several of its members were wearing Special Forces, rather than Special Operations, shoulder tabs during ANAKONDA 16.

The combat uniform worn by this Hungarian SF trooper was genuine MultiCam, mostly from Crye Precision’s own specialist range of garments and this was confirmed by the small manufacturer’s tags on the leading edge of the sleeve pockets. These days, even close up, it can be quite difficult to determine whether either genuine MultiCam fabric or one of the many copies is being worn, so it is worth checking for pocket tags even though some wearers, particularly when operationally deploying, may cut these off. The plain fabric colour of the UBACS (Under Body Armour Combat Shirt) worn by Hungarian troopers seemed to vary between Coyote Tan and Light Khaki. Combat helmets appeared to have been individually sprayed with camouflage colours and patterns ranged from minimalist to quite complex.

Hungary’s dedicated SF battalion in its current format is only 15 years old, having been formed on 1st September 2004, but its roots go back to an elite World War Two parachute battalion which earned a fearsome reputation fighting the Red Army and was reformed as an elite airborne unit during the Cold War. Following the collapse of the Warsaw Pact, free elections in 1990 and the restoration of democracy, the Hungarian Defence Force started to realign with NATO and 34th László Bercsényi Battalion began to evolve from a light infantry formation to take on Reconnaissance and Special Operations roles. As part of ISAF, Hungary provided a Provincial Reconstruction Team from 2006 and in 2008 34th Battalion deployed to Southern Afghanistan.

The Hungarian SF troops on ANAKONDA 16 wore some interesting insignia, in addition to their national tricolour shield which was spotted in both full colour and low visibility versions. Special Forces shoulders tabs, in either English or Hungarian (Különleges Erök) were worn by most and some also sported Airborne tabs. The battalion’s badge, consisting of a winged dagger with 34 above and BERCSÉNYI below, was worn by several operators, as was a round HUN SOTU (Hungarian Special Operations Task Unit) patch with the mythical falcon-like Turul national symbol. Most operators also wore identification numbers preceded by a T.