The Camo Lounge At Military-Odyssey 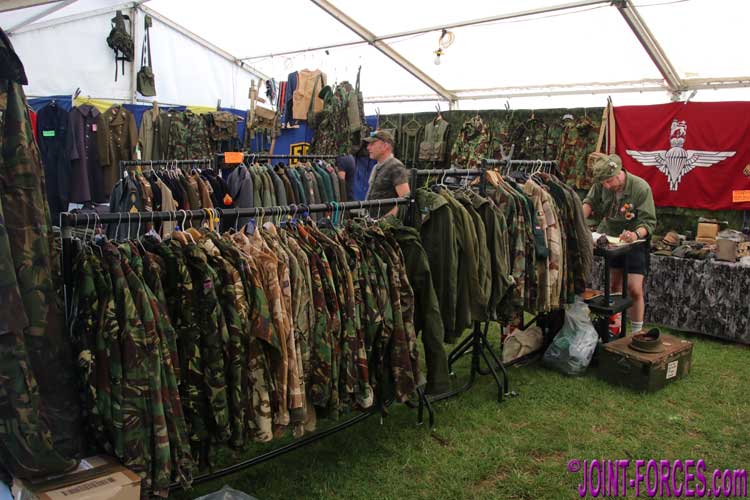 Yesterday I joined Andy and the East-West Trading team as they set up a corner of their Camo Lounge at this weekend’s Military Odyssey Living History Show, writes Bob Morrison.

The Camo Lounge is normally a specialist area upstairs at East West Trading’s Laindon (Essex) warehouse where serious collectors of military camouflage uniforms and associated historic militaria can browse by invitation, but each year a representative selection of kit is brought to the Kent County Showground at Detling for Military Odyssey.

I was originally introduced to Andy, by Russian militaria trader and vodka enthusiast Oleg Savochkin, at the very first Military Odyssey 19 years ago and our mutual interest in camo has kept us friends ever since. Although the East-West team pop up at various militaria shows throughout the summer season, the August Bank Holiday event at Detling is their big one of the year and the one place where serious camo collectors are guaranteed to gravitate towards. The accompanying photos, snapped yesterday afternoon, show just a fraction of what is on display in the East-West marquee and in addition to this specialist kit they also have a truckload of high quality military surplus on sale.

Two things which particularly caught my eye yesterday were very old US LRP ration packs. One of this Food Packet Long Range Patrol pair is a very old poly-bagged MRE-style ration pack which itself is a rarity, but the other is even more interesting as it is a much earlier foil outer ration which probably dates from the Vietnam War. Each of these rare packs – both are Menu 4, Beef With Rice – would set a serious collector back a three-figure sum.

You can find the East West Trading marquee facing onto the roadway closest to the battlefield near the Beer Tent end of the Trade Stands complex. Pop in and say hello… some of them might look a bit scary as the long weekend progresses, but they won’t bite.