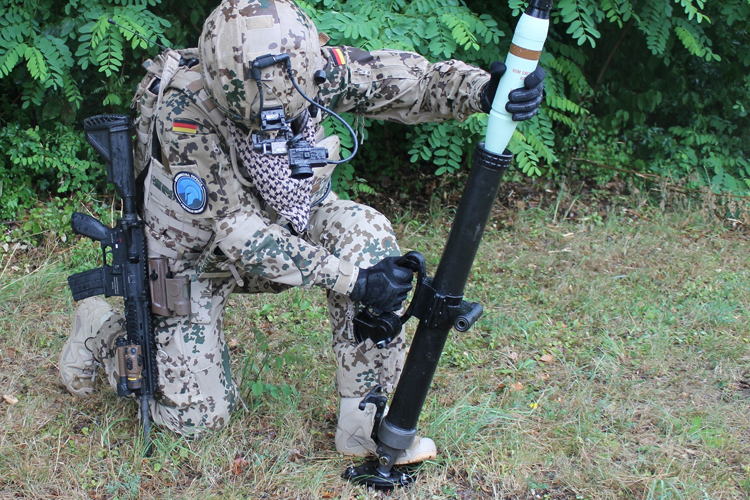 Rheinmetall has today announced the development of a new two-in-one 60mm Infantry and Special Forces mortar weighing under 7kg in the Commando mode.

Press Release, Düsseldorf , 13 August 2019: Rheinmetall has developed a new 60mm mortar for Infantry and Special Forces. The RSG60 features innovative design and engineering characteristics which make this indirect fire system very light and easy to handle. A few quick manual adjustments turn the 15.8 kg standard Infantry version into a Commando mortar weighing just 6.8 kg, with no need for tools. This makes the RSG60 a two-in-one solution.

Depending on the ammunition and charges, the standard version can attain ranges of up 3,200 metres. Equipped with a thirty centimetre-longer barrel, the range increases by around 500 metres. The commando variant of the RSG60 has a range of around 2,000 metres.

About 70 centimetres long, the barrel is made of steel with a carbon fibre over-wrap. This assures the necessary stability at the same time as lower weight, resulting in a barrel that weighs around 30 percent less than a conventional steel mortar. The base plate is made of carbon fibre composite material. The novel design of this indirect fire weapon not only saves space, it can be set up and ready to fire in a matter of seconds. Furthermore, by loosening the retaining bolts, it is possible to separate the RSG60 from the base plate in around thirty seconds, transforming it into lighter-weight Commando mortar.