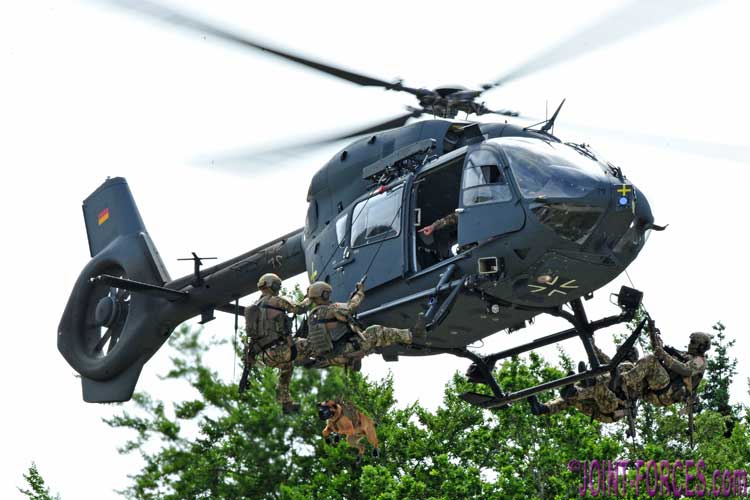 Yesterday, 15th June, during the Tag der Bundeswehr open day at Pfullendorf the KSK and EGB Fallschirmjäger displayed some of their capabilities, reports Carl Schulze.

Based in Calw in Baden-Württemberg the Kommando Spezialkräfte (KSK) numbers 1,400 troops, including enablers, and is structured into an HQ, the Einsatzkräfte (Operational Forces), the Unterstützungs Kräfte (Service Support Forces), and the Bereich Weiterentwicklung (Trials and Development Establishment). The Einsatzkräfte are structured into four Kommando Kompanie (Special Forces Companies), the Spezial Kommando Kompanie (Special Purpose Special Forces Company), the Spezial Aufklärungs Kompanie (Special Forces Reconnaissance Company) and the Ausbildungs- und Versuchszentrum (Training Establishment). The tasks of the KSK include, among others, conducting Hostage Rescue and Non-combatant Evacuation Operations, acquiring information of key strategic importance in crisis and conflict zones, conducting Direct Action missions in order to neutralise terrorist and irregular forces threats, and conducting combat operations within conventional and asymmetrical conflicts with the aim of neutralising targets with high strategic or operational value.

The Ausbildungszentrum Spezielle Operationen, situated at Pfullendorf in south-western Germany, is the German Army’s primary training facility for its Special Forces and Special Operations Capable Forces. It is here that NCOs of the German Airborne Forces are trained, parts of the training of the operators of the KSK is conducted, and most of the training courses for the Fallschirmjäger EGB are conducted. The training facility is also responsible for training of the Combat First Responders (CFR A/B/C) of the Bundeswehr and conducts, among many other courses, SERE (Survival – Evasion – Resistance – Extraction) training.

The KSK demonstration of this year’s Tag der Bundeswehr lasted about 30 minutes and was split in two main parts, the first seeing operators conducting a vehicle interdiction mission, set somewhere in a civil-war shaken foreign country, in order to arrest a group of terrorists that planed to conduct a terrorist attack in Germany. During the second part a German citizen taken hostage had to be rescued.

As part of the demonstrations: KSK operators on motorcycles and all-terrain vehicles (ATV) set up blocking positions; operators abseiled and fast-roped down from H145M LUH SOF (Light Utility Helicopter Special Operations Forces) of the Hubschrauber Geschwader 64 of the Luftwaffe German Air Force; a fleeing terrorist was arrested with support of a service dog handler; operators breached a door using an explosive charge; and snipers neutralised a guard using live ammunition.

Of extreme interest was that the KSK operators participating in the demonstration wore uniforms in the new Multitarn-Muster camouflage pattern developed for the Bundeswehr by the Wehrwissen Schaftliche Institut für Werk- und Betriebsstoffe (WIWeB). Also of interest was the fact that the operators fielded the just recently introduced new 5.56x45mm Gewehr Spezialkräfte G95 assault rifle variant of the HK416 A7 manufactured by Heckler & Koch.

Then followed a tactical demonstration during which Fallschirmjäger EGB had to seize an arms depot from an insurgent group, arresting all hostiles without firing a shoot. As part of the scenario first a sentry had to be neutralised when standing guard on a roof, then the Paratroopers had to mechanically breach two doors and a window in order to enter the building, using rams and Halligan Tools. The operation was covered by Fallschirmjäger EGB sniper teams, one having taken up a position on a rooftop, another along a berm and a third emerging out of sewers. An insurgent fleeing the scene in a car was stopped by cut-off teams, removed from the vehicle and arrested.