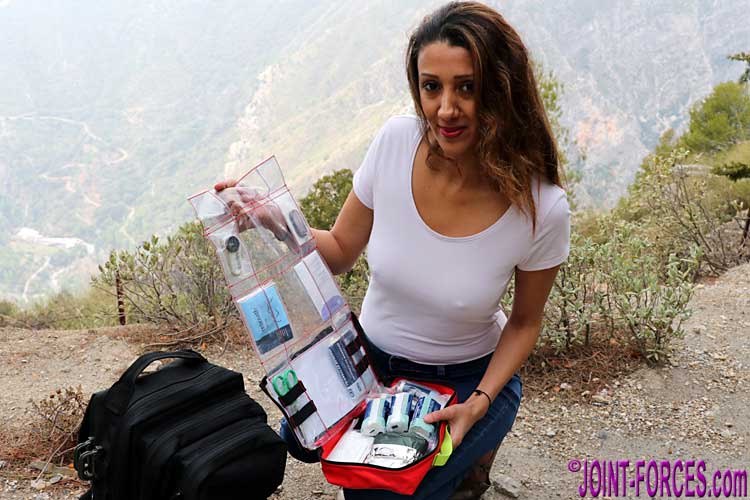 The Elite Explorers Kit from BCB is the largest and most expensive of the Cardiff-based company’s wide range of Travel and First Aid pouches, writes Bob Morrison.

Introduced at the start of 2019, with seven combinations contained in two two sizes of pouch, these travel kits are so useful that I have carried one in my hold luggage on over a dozen foreign assignments trips during the course of the year. Normally it is one of BCB’s handy Lifesaver First Aid Pouch Kits (CS119 & CS124) that goes in my case or bergen, though I have also carried the Travel Bag (CK066) in my luggage or overnight bag on some trips, but until quite recently the Elite Explorers Kit (CK065) has sat on a shelf as these other pouches were all that I needed.

At the beginning of December I decided to take last-minute advantage of a RyanAir £9.99 seat offer and headed off for a long weekend to the Costa Tropical region of Granada Province, where it was not forecast to be raining and the tapas are gratis. Although we have been to this area before, and I have both explored and penned a number of travel magazine features on this part of Andalucia over the last 15 years, my companion Ramilla had not previously seen all of the dramatic and historic coastline between Nerja and Velilla-Taramay or followed the ancient Carretera de la Cabra packhorse route from the Costa Tropical high up over the Sierra de Cázulas in the direction of Granada city. So, with a mild few days ahead of us, I dug out my maps and planned a little gentle exploring, building in lunch stops at traditional restaurants like El Capricho in Otivar, which I first discovered in 2007, to break up the days.

Never one to head off on my travels without at least a basic first aid kit (that’s what two decades of editing a magazine with ‘Survival’ in the title does to a guy) this time I took the BCB Elite Explorers Kit, which includes both simple medical accessories and basic survival items, including things as diverse as a foil blanket and a multi-tool, in its main compartment and fold-out pocket roll. Packed into a high visibility waterproof zipped BCB No.6 Pouch measuring roughly 250x150x65mm or 10x6x2.5 inches, the whole kit weighs less than 850g or 30oz. While out and about during daylight hours we carried the kit at the bottom of the Highlander 28 Litre Recon Pack, which doubled as camera bag and transported our SnugPak travel towels and our jackets, for when the sun started to dip in the late afternoon, where it took up very little room. It can be tempting to switch off when in holiday mode but when exploring an area that is a bit off the beaten track where few other tourists, or locals, may be venturing and which could possibly be many kilometres from help if something were to go wrong one should always plan for potential emergencies.

Precise contents of these BCB packs might vary slightly – the one illustrated is from the first production batch packed earlier this year – but the medical items in ours included: Cotton Gauze Swabs, 2x Wound Dressings (No. 8 & No.9), 3x Conforming Bandages, 2x Paraffin Gauze Dressings, 1x Triangular Bandage, 6x assorted size Safety Pins, 20x Washproof Plasters, First Aid Scissors, a Foil Blanket, a Burns Bag and a Rebreath Mouth-To-Mouth Shield. Not shown in the accompanying images is the roll of elastic adhesive tape, which I had recently been carrying in another First Aid Kit and forgot to transfer back over (lesson learned). In the field shots you might spot a tube of antiseptic cream which I added just before we left as no ‘wet’ items are included in the basic kit; unlike the supplied contents creams have a comparatively short shelf life so are not included and if added they should be periodically inspected and replaced if necessary.

The survival items in our kit were: a 3-in-1 Carabiner / Compass / Thermometer, a set of Identity ‘Dog’ Tags, a 24-in1 (25-function) BCB Multi-tool with Nylon Belt Sheath and an individually bagged Personal Survival Kit. The latter included: 2x Cable Ties, Fireball Flint & Striker (which doubles as a mini hacksaw blade), Distress Whistle, 2x Stiff-backed Razor Blades, Tealight Candle, Pencil, LED Micro-torch, 3.5m Trapping Wire, 900mm White Nylon Cord, 1.0m of Clear Silicon Tubing, Wire Saw, Fishing Kit (line, hooks, swivels and weights), Sewing Kit, 6 more Safety Pins, and a rudimentary but informative BCB Survival Instructions Sheet. The stainless steel BCB multi-tool looks a little bit like the original Leatherman SuperTool, but is a budget item intended for occasional rather than lifetime use, which offers six tools in one handle and spring-loaded mini-scissors plus a hex driver in the other; 12 different hex, cross and slot drivers are included in a rubber clip which has its own sleeve inside the nylon belt pouch.

Above: The BCB 24-in-1 stainless steel belt tool in pliers mode and with blades etc. opened out plus hex driver clip above [©BM]

I am glad to say we did not need to resort to the contents of the BCB Elite Explorers Kit on our recent trip to the Costa and Sierras, but if we had encountered an emergency we would have been well prepared. It is available on the High Street from good outdoor shops or direct from BCB by clicking on the hyperlinks on this page.