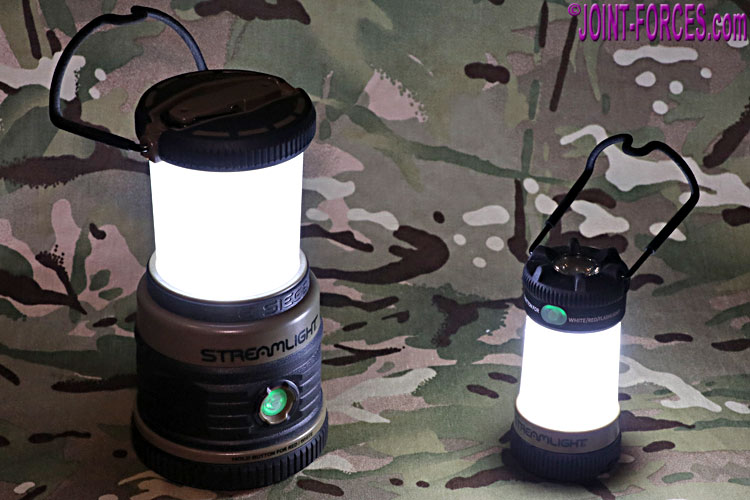 I am not really a gadget freak but I do like a neat gadget… and the new Streamlight SIEGE X USB- Rechargeable Lantern is in my opinion doubly neat, writes Bob Morrison.

In late 2014 I reviewed the then quite new original Streamlight SIEGE Lantern and five years down the line I am still using it as my go-to emergency light for those odd occasions when the power goes off – indeed it hangs in a permanent position between my bedroom door and the front door of my studio apartment where I know I will easily be able to instinctively put my hands on it in should a power cut occur or an emergency strike.

While out in Bahrain at the recent BIDEC expo I spotted a couple of miniature version of the SIEGE, the SIEGE X model, on the Streamlight stand and begged to be allowed to take one for review. My wish was granted and I have now had a chance to try it out alongside its larger sibling (read my review from 2014 below). The new and much smaller version is clearly a younger sibling of the original SIEGE and it shares much of its design, but where the SIEGE X primarily differs is that it can also be used as a flashlight.

First the SIEGE X ~ Not only is this robust compact (just 4.35” or 110mm high) 325 lumens dual colour (white or red) lantern capable of either self-standing or being suspended from built-in handle or carabiner, but the included li-ion battery can be recharged from a USB power source; it can also run off 2x standard CR123A lithium batteries instead if, like many in the military and blue light services, you have this size available. On the lantern / flashlight side, the single push button at the top allows: three levels of white light from the lantern; continuous red or red Morse SOS from the lantern, or two levels of white light from the 300 lumens flashlight in the top. In addition this sturdy light, tested to IPX7, the SIEGE X is waterproof to one metre depth and impact resistant for a two metre drop. Battery life is stated to be from 4.5 hours for the lantern or 3.5 hours for the flashlight at full brightness out to 25 hours at 30 lumens for either mode, and the low level red flashing SOS signal should last for up to 90 hours. As the SIEGE X only weighs 205g (7.2oz) I can now carry a mini version of my emergency lantern on my travels.

Like the original SIEGE Lantern, the SIEGE X is distributed in the UK by Viking Arms Ltd (VikingArms.com).

Original SIEGE review from late 2014 ~ The Streamlight SIEGE Lantern is a lightweight but bright 360° illumination lamp which runs of three D-cell (R20) alkaline batteries. With a run time of nearly 300 hours at the lowest of the three brightness settings, this is an ideal survival or emergency light source, but if the highest setting is selected it will light a large tent or a small room with 340 lumens of brightness for 30 hours.

The designer of this compact lamp – it is smaller than a NATO water canteen – deserves a coconut or two as they have incorporated several means of hanging it by way of either the folding handle (designed to hook over rails or branches) or the carabiner-style D-rings on top and base; the kink in the folded carrying handle will also allow it to be hooked over a nail in the wall. A simple push button in the base operates the 3-setting quad LEDs (bright, medium, dim) and the 2-setting (high or SOS) single red LED; the red setting allowing night vision adjustment.

Of tough polycarbonate thermoplastic construction, with elastomer over-mould, the SIEGE Lantern has a moulded rubber base for stability on slippery or uneven surfaces. The assembly, with the translucent light-diffusing cover in place, is weatherproof for outdoor use and is also waterproofed to cope with submersion in up to one metre of water. Indeed the unit will even float, the right way up too, if dropped overboard. Indoors, with the translucent cover and cap removed, the bare domed lamp can be sat on its base or hung inverted to illuminate larger areas, in either white or red modes. At medium setting the siege should give around 175 lumens of tent lighting for 70 hours on one set of batteries.

At this point we should point out that as we did not have any D-cell alkaline batteries immediately to hand we used lower strength zinc batteries, but the lantern still gave more than adequate light and it worked well enough on all five settings; of course battery life will be shorter with zincs, but power output was perfectly acceptable. One very useful secondary feature of this light is the recessed press switch, which illuminates to act as a battery warning indicator; it starts at green on full power and gradually alters to orange then red and finally flashing red as charge runs downs, warning the user that it is time to change.

On the specification side: base diameter is 96.5mm or less than four inches; height is about 185mm or 7.25″ with handle stowed; and weight with three batteries fitted is just 880 grammes. Primary colour is Coyote, the military khaki/tan shade. Despite it being small enough to fit in a water bottle pouch, this well thought out lantern gives impressive light.