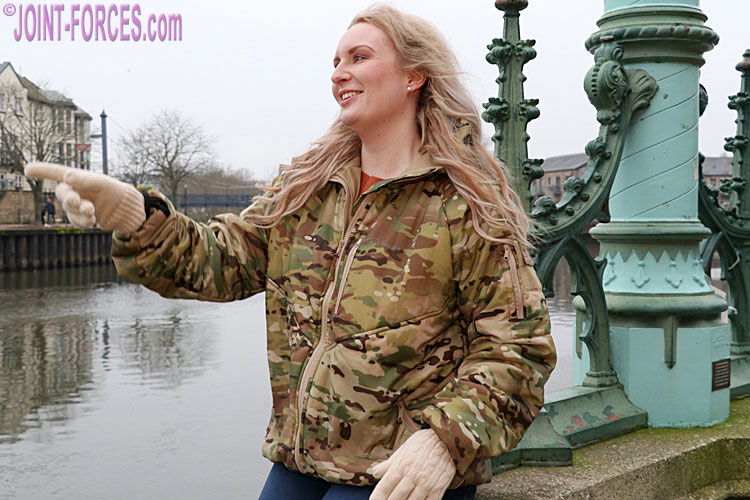 With an outer shell made of wind-resistant Paratex Micro treated with hydrophobic DWR (Durable Water Repellent) to make it water-resistant, high loft Softie Premier insulation which compresses well for stowage but expands rapidly to trap body heat, and TS1 ‘thermal suede’ lightweight polyester lining for added comfort, the Snugpak Tac3 Insulated Hoody is a high quality mid layer for cold conditions which can also be worn as an outer garment.

I have worn Snugpak insulated jackets for close on quarter of a century, and for almost as long have travelled on four continents with Snugpak sleeping bags of various weights too, so it is safe to say I have long been a convert to the Yorkshire brand; indeed it was company founder Brett Harris himself who showed me how high end sleeping bags are constructed in his historic Silsden mill factory way back at the end of the last millennium. Military users picked up on the company’s products some three decades ago and early in the British troop deployment to Afghanistan under Operation VERITAS, which preceded Operation HERRICK, Snugpak insulated jackets were issued by UK MoD as a mid-layer for winter conditions, though subsequent penny-pinching by short-sighted bean-counters later saw cheap Far East copies being procured to replace them, but by then the Yorkshire company’s jackets had such a good reputation that switched-on soldiers continued to buy them with their own hard-earned cash.

The current SJ-series (with a 3, 6, 9 or 12 suffix denoting temperature rating) is the direct descendant of those earlier superb insulated jackets and the Tac3 is a newer variant with a very soft lining throughout, which means is extremely comfortable if worn next to skin or with a lightweight T-shirt. Early Tac3 jackets had a simple roll-away unlined Paratex hood to provide basic head protection from the elements, but customer feedback prompted Snugpak to introduce a lined hood to this latest version. I spotted one of these, in black, being worn by the company’s Sales Director at the MiliPol police and security expo in Paris in late November and offered to pen a review once stocks became available as my well-worn six year old, slightly heavier weight, Softie Jacket SJ6 is probably now due for a break.

As this new jacket has the TS1 lining it is not reversible, like the Sleeka model which has long been popular with military users, but how often is reversibility actually needed? For those unfamiliar with this material, TS1 is a soft, suede finish lightweight polyester fabric which uses a combination of microfibre and macrofibre filament yarns to create a short pile which both creates a warm insulating layer and naturally moves moisture from low to high surface areas to wick it away from the body. In addition to the inner face, including sleeves, the Tac3 also uses TS1 lining for the two lower front zipped pockets to make them very handy handwarmers. Talking of pockets, in addition to the main pair there are small vertically zipped pockets on the left chest and left upper arm as well as a horizontally zipped inner document pocket which will easily accommodate an A5 notepad.

The Tac3 Hoody featured here is produced from Genuine MultiCam pattern Paratex Micro, but both Olive Green and Black alternatives are available off-the-shelf and other camo patterns are available for Government & Military bulk buyers. I opted for MultiCam rather than single colour as I foresee having a need for a lightweight camouflage pattern insulated jacket which I can use as an outer layer in Northern Europe in the spring, but in the meantime on cold days I plan to wear it as a mid layer under a waterproof outer jacket on cold days in the UK. Incidentally, it has thumb loops on the sleeves to stop them riding up when worn under another jacket. As this garment compresses down quite small in its supplied stuff sack it also takes up less room than one might expect at the top of a daysack, so it is a good one to carry as a back-up for when the thermometer drops at the end of a winter’s day.

Looking now at the fine detail. All zips – pocket and main front – are high quality YKK brand. There is a weather baffle behind the main, single action, front zip and an elasticated drawcord in the hem with spring toggles either side allows the bottom to be pulled in to conserve body warmth. The standing collar extends by 100mm / 4” with the front zip running right to the top and the roll-up lined hood, held in position by a wide panel with hook & loop tabs, has an elasticated drawcord with spring toggles each side to draw it in close around the face if required. There are also large square tan coloured loop panels on each upper arm for the attachment of tactical badges and patches (not supplied).

I asked Shannie to wear my jacket for the photos, as she is a lot easier on the eye than an ageing and overweight website editor, but other than on this grey and cold Saturday morning down beside the Exe the Tac3 Hoody has not been off my back while I have been outdoors at the end of a damp and chilly January. To say I have been snug in my Snugpak might sound like a bit of a cliché, but when Brett and Bryony came up with the company name over 40 years ago they hit the nail very much on the head.