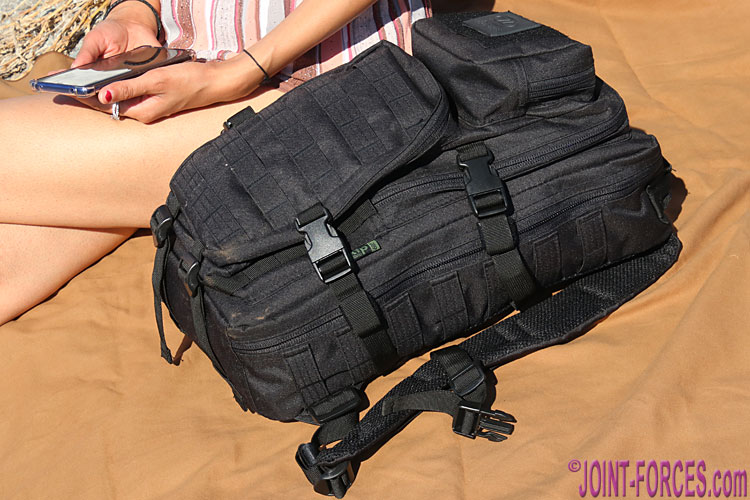 There are times when I need a small daysack that does not look overtly military but, like the Highlander 28 Litre Recon Pack, can still be expandable, writes Bob Morrison.

As the last few months have been rather hectic – for example just between DSEI in London in mid-September and BIDEC in Bahrain in late October I had to cover Operation BEYOND THE HORIZON, Exercise RAPID TRIDENT and the launch of New Generation Zetros – I reckoned I owed myself a few days’ break away from all things military.

Originally I had set aside a week in October to cover Exercises JOINT WARRIOR 19-2 and GRIFFIN STRIKE 19, the final work-up prior to the UK-French Combined Joint Expeditionary Force being declared operational. However as, unlike their French counterparts, these days the UK MoD appears to have very little interest in allowing specialist media access to HM Armed Forces in the field I decided to put my free time to good use by grabbing last minute EasyJet flights to Malaga for Ramilla and myself.

Having now seen just how little last-minute effort Whitehall put into obtaining independent media coverage of this key CJEF exercise, I reckon I made the right choice in chasing the sun while the UK was battered by seemingly relentless rain. It would have been good to have seen how the CJEF, announced in the 2010 Lancaster House Treaties, is finally shaping up but maybe we’ll get a chance next year.

Back to the Recon Pack. As we were only going to be away for four days and three nights, mostly exploring Costa Tropical beach restaurants by day and strolling around the Almuñécar Tapas Trail by night, I only required a single DSLR camera and a small back-up point & shoot rather than the fuller kit I usually carry on my travels, but as I still needed to work on the website each day I also had to carry my travel netbook (plus a back-up, just in case) in my airline carry-on daysack. When fully expanded this mid-sized, three-compartment pack (with smaller fourth upper pouch compartment) from Highlander can carry a massive amount of kit if necessary but it can also squash down considerably to fit airline luggage gauges, courtesy of its concertina design and effective compression straps. However if required seven rows of twin slot PALS tapes down each side of the main compartment and seven more full-width tapes across the lower outer compartment give plenty of scope for attaching utility pouches etc. to give even more carrying capacity.

I deliberately opted for Black – Olive, Grey and MTP-compatible versions are available – as I wanted a daysack which would not look too militaristic but which I could add to in the future if necessary. When on assignments covering military subjects I usually carry a MultiCam daysack/camera bag with three to five camo pouches, which I carry in my hold luggage and attach in-theatre, but as I have also collected various black MOLLE-type pouches over the years I can easily increase the capacity if necessary.

The Recon Pack, as previously mentioned, has three primary compartments. The main compartment has a full-length double action zip running right from the base up and round the top to the same point on the other side which gives maximum access; a couple of 2-litre Snugpak Pakboxes are a good fit and I hang one ffrom the bladder straps at the top to hold it secure. There is a hole at the top of this compartment for a hydration tube, if required and not included, and my only grumble about this pack is that there is no weather baffle to keep out dust and the elements if a tube is not fitted. This main compartment has no pockets / sleeves or other internal fittings, with the exception of a half-depth mesh upper sleeve pocket under the lid, but I see that as a bonus as it reduces the temptation to stow spurious bits & pieces.

When travelling I carry my back-up netbook in a thin padded sleeve in the main compartment atop the two Pakboxes, but when exploring the Costa Tropical I loosened off the compression straps to allow us to carry Snugpak microfibre towels and other beach stuff instead. While on the move my primary netbook slips into the secondary compartment, where it is easily accessible if I want to work. This compartment has a nylon pocket, big enough to hold a passport or the like, plus two smaller mesh organiser pockets on its back face. The double-action zip to this compartment is roughly 60/40 in length rather than being full-length.

The third compartment, the lower outer one, is almost full width and is two-thirds of the depth. Inside, on its rear face, is an organiser panel with open-topped pocket behind. On the outer face are seven rows of PALS tapes. This compartment, which is ideal for carrying a book and accessories, such as a computer charger and cable, has a half-zip which means there is less chance of accidentally losing smaller items. Above this compartment is a smaller zipped pouch in which I carried my little back-up camera and some smaller bits & pieces.

Manufactured primarily from 600 Denier nylon fabric, the Highlander Recon Pack is pretty durable and hard-wearing, though it is probably not as ‘bulletproof’ as some of the heavier duty 1000 Denier rucksacks and bergens procured by UK MoD. Its back panel and straps are well-padded, making it comfortable to carry, and it has both a sternum strap and rudimentary removable waist strap to hold it secure during strenuous activities.

I have owned a couple of Highlander daysacks in the past and always got on well with them, so I do not see this one being any different. As a bonus, it won’t break the bank but is seems more robust than some of its budget end competitors. I got on very well with this one, and Ramilla didn’t object to carrying it either.