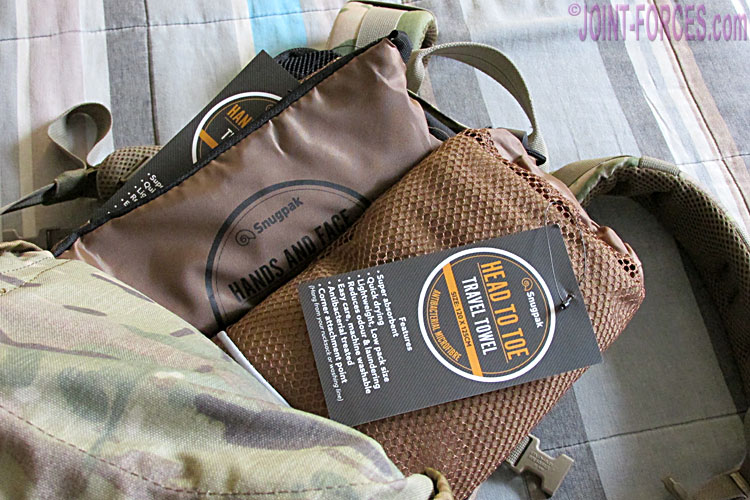 Like our Gear Tester, Mike Gormley, I have used Snugpak Microfibre Travel Towels for at least the last seven or eight years and I usually carry a large one when on assignment overseas, writes Bob Morrison.

On my last trip out to the Middle East the late spring temperature and humidity were both on the high side, so my lightweight microfibre towel came in for a fair bit of use over the fortnight I was in-theatre, but after many years of repeated use it was clearly wearing a bit thin so I resolved to replace it prior to my next trip. On my return a quick search of the snugpak.com website showed that not only was this type of towel still stocked but also both full size ‘ Head To Toe‘ sheet and medium size ‘Hands & Face‘ versions are available plus three colour options – Coyote Tan, Olive Green and Russet Orange – are produced.

Unlike Mike, who seems to enjoy trekking and camping in cold and wet places, I prefer the comforts of a bed and a fixed roof over my head when on assignment for JOINT-FORCES.com, but as our resources do not run to the likes of the Ritz or Waldorf-Astoria or Burj Al Arab you are more likely to find me kipping over in an EasyHotel or Formule 1 when I have to stay in a big city. Consequently, it makes sense to carry my own travel towel as that type of accommodation is not noted for supplying luxury bath sheets (or, for that matter, luxury bath robes).

The Snugpak Head To Toe towel measures 125x120cm (roughly 50×40 inches) so is a decent sized bath sheet but it weighs just 360 grammes (11oz) and packs away into its own neat mesh stuff sack, with nylon interior drawstring bag to keep it separate from your kit if still damp; if backpacking on a dry day, put the damp towel in the outer mesh sack and hang it off the outside of your rucksack or bergen and it should dry off through simple evaporation. The Snugpak Hands & Face towel, which has its own half-mesh zipped stowage bag, measures 80x62cm (roughly 32×24 inches) and weighs just 120 grammes (under 4oz). Once packed away into their mesh sack or bag the two towels are sufficiently compact to be stowed in a single standard UK Forces utility pouch.

Mesh stowage sack or bag has a hanging loop, as has each towel [© Bob Morrison]

For those unfamiliar with microfibre towels, they are made from an ultra-soft and super-absorbent lightweight fabric which shifts a lot of moisture off the skin yet dries out very quickly. The Snugpak towels are also treated with SILVADUR antimicrobial technology, which is a polymer-containing silver treatment that delivers continually released ions when organisms land, or form, on a treated fabric and kills off the microbes that cause odour and material degradation; a boon for those travelling with limited access to laundry facilities.

I opted for Coyote Tan, which in my opinion is the best colour for most military users, but the Olive Green shade is also a tactical colour. Backpackers may find the Russet Orange shade to be more practical as it is very visible and could come in useful in an emergency / survival situation. The mesh and nylon outers of the tactical towels are colour-coordinated.

These towels are available through most of the major Snugpak stockists but can also be bought online by going to snugpak.com/military/ and typing Towel into the Search Box.  Highly Recommended. The two towels are sufficiently compact to be stowed in a single standard UK Forces utility pouch. [© Bob Morrison]

Featured, Microfibre, Snugpak, Towel, Travel Towel
You may also like