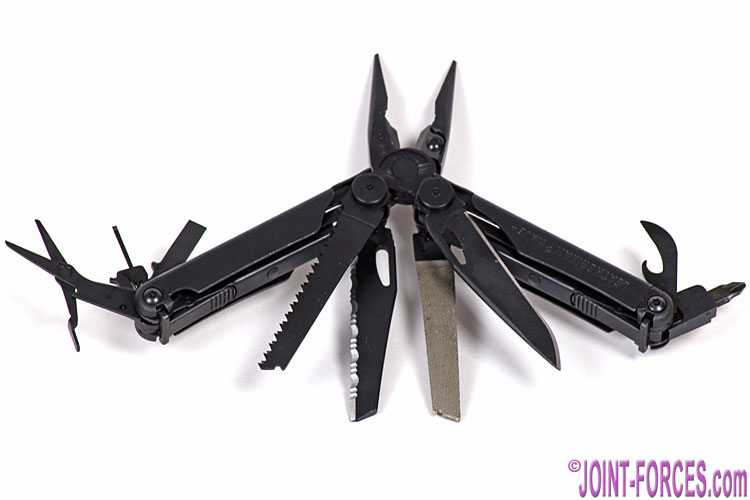 For the last month or so I have been using the WAVE+ Multi-Tool from Leatherman, including during my fortnight long assignment to the Middle East, and not only did it do everything I expected of it but it also performed a totally unexpected task.

I have owned a Leatherman SUPER TOOL for a little over twenty years, writes Bob Morrison, and it is now one of my few cherished possessions, not least because Tim Leatherman himself engraved it with his signature for me on his trip to the UK in 2009. That classic belt tool, which I still carry in its original leather holster, served me well during my tenure as editor of the lately expired COMBAT & SURVIVAL Magazine and has been with me on trips throughout the world from the Arctic wastes of Norway to the South African savannah to the shores of the Gulf of Oman, never letting me down once.

There are, of course, other makes of belt tool and indeed I have both Gerber and SOG models close to hand as I write this review, but to me a Leatherman is always a little bit special as it was not only the original but Tim got the basic concept right pretty much from the beginning. The quality of the brand is second to none, so much so that the company gives a no quibbles 25-year warranty that if it lets you down (assuming you don’t do something silly with it) they will repair or replace with a tool of equal or greater value; okay, I’ve still got a little over four years to go on my guarantee, but I doubt I’ll have grounds to redeem the offer now.

The WAVE+ is described by Leatherman as an 18-in-1 Multi-Tool, the addition of replaceable wire-cutter inserts in each jaw being the difference between this model and the earlier WAVE tool; I suspect the average user may not need this feature, but the likes of sappers and farmers who regularly need to cut wire will no doubt appreciate the option a few years down the line. Manufactured from 420HC (High Carbon) stainless steel, heat treated for strength where appropriate, the WAVE+ is available in either bright steel or, at a £5 premium, with black oxide powder-based coating for those who will be using it tactically.

Unlike original Leatherman tools such as the PST (which, incidentally, is being released in a Limited Edition version as the Heritage PST) or the SUPER TOOL, the WAVE+ does not have all its blades built into just one side of the pliers handles, but is beautifully redesigned with the two main knife blades plus the knife and saw built into the outside of the handles when the pliers are in the closed position. This redesign of the initial concept, similar to that used for the CHARGE and SIDEKICK models, not only lets the user access these four tools without opening up the pliers, but also means the clipped spearpoint blade and serrated blade tools, which each have a thumb lock for safety, can be opened and closed one-handed with the right hand; the lesser-used saw and file blades need two hands to open and also have sprung thumb locks to keep them solid when in use.

To access the other tool blades the pliers, which are needle-nose with conventional serrations on the inside of each jaw, have to be at least half opened but once the required blade has been extracted and locked the tool can be folded again to give maximum grip. One handle contains a can and bottle opener with wire stripper built into the base plus a screwdriver with replaceable double-ended bit giving both 5mm flat and Philips options. The other handle contains a 1.5mm spectacle screwdriver blade, a 7mm flat screwdriver blade and a pair of sprung 20mm blade folding mini-scissors. These five tool blades stowed in the inner sides of the handles are held locked when opened by a sprung rocker lock at the opposite end of the handle from the pliers hinge.

Finally, ruler markings in both imperial (1/8 inches) and metric (mm) are stamped into each edge of the handle, and the WAVE+ is supplied with a black nylon sheath with a multi-function press-stud strap to allow it to be carried on equipment with PALS (MOLLE) tapes or hung from the waistbelt. Incidentally, a belt clip attachment can be purchased independently (it locks cleverly into one end of one of the handles) and this accessory pack includes a lanyard hoop which can be clipped in instead of the belt clip.

To buy the WAVE+ online, or compare against other Leatherman Multi-Tool models, go to leatherman.co.uk/multi-tools

Footnote: I mentioned at the beginning that I used my WAVE+ for a totally unexpected task while out in Jordan covering WARRIOR COMPETITION at King Abdullah II Special Operations Training Center. To cut a long story short, I split a big toe nail and although I always carry a pair of nail clippers in my soap bag when travelling, as the nail in question was curled and ingrowing I knew these would be absolutely useless. The folding scissors in the Leatherman, which I did not really foresee having much practical use unless I was going to take up dressmaking, were absolutely ideal for the job of trimming the rock hard nail close to the quick to prevent the split growing. I was really impressed, though when I took my Iturri DCHL boot and Snugpak Merino sock off to perform the minor operation I noticed a herd of goats which had been quietly munching away downwind suddenly departing in a cacophony of jangling bells! belt tool, Featured, Leatherman, multi-tool
You may also like