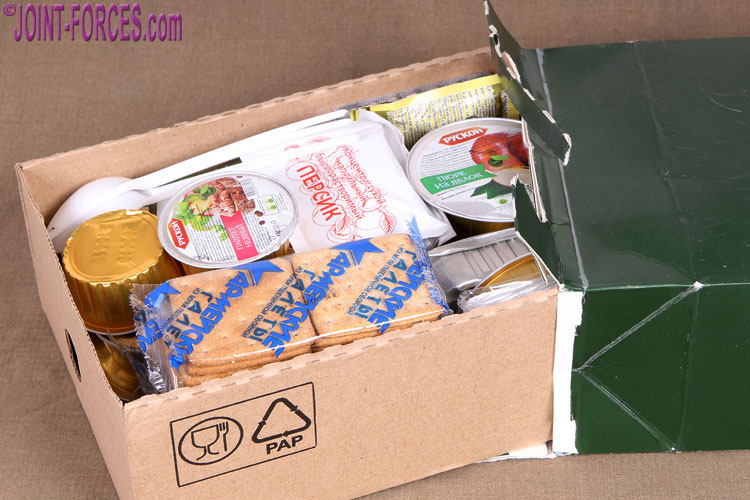 Over the last thirty or so years, since my first excursion to Norway to photograph Royal Marines on annual winter deployment, I have consumed a great variety of rations but this one from Russia is a first for me.

As those who have read my 40-plus articles in the Marching Ammo series in COMBAT & SURVIVAL Magazine (a title placed in limbo while the Receivers wound up the affairs of the company which quietly purchased it late 2017) will be aware, I quite enjoy sampling the the culinary delights of ration packs issued to troops on exercises and deployments. For example, when covering the initial deployments of the NATO eFP (enhanced Forward Presence) battlegroups in the Baltic defensive shield last year I picked up and taste-tested the latest packs issued to troops in the field by Canada, Estonia, Germany, Latvia, Lithuania and the Netherlands.

Having sampled the field food issued to troops facing up to the threat of further westward expansionism by President Putin – who in 2014 flexed his muscles by annexing Crimea and supporting insurrection in eastern Ukraine – when offered a Russian ration pack by Dean of Partisan Supplies (Facebook link) through Andy of East West Trading it seemed only fair to check out what keeps the Russian Bear marching. Just like most NATO military nations who produce ration packs refined to suit their soldiers’ taste preferences, the Russians do likewise and produce a variety of menus providing sufficient foodstuffs and ancillaries to keep a soldier functioning at top performance for 24 hours in the field.

Just like the British, the Russians supply a full day’s worth of foodstuffs in the one outer cardboard carton and size-wise the two are remarkably similar though the UK ORP (Operational Ration Pack) is about 15% deeper than the IRP or Individual Ration Pack. In Russian it is called ИНДИВИДУАЛЬНЫЙ РАЦИОН ПИТАНИЯ, or INDIVIDUAL’NYY RATSION PITANIYA if using Latin characters, and seven menu variations are provided in a brown outer cardboard carton containing seven packs.

The packs supplied inside the plain outer carton are dark green and pale green with the calorific value for each pack printed on the side but the menu number is marked in ballpoint pen. The cardboard the pack is constructed from has a laminated outer surface, slightly glossy to the touch, to protect from the elements and the inner surface of the airtight pack has a silver plastic laminate for further moisture protection; inside the pack all contents are tightly packed into an open-topped cardboard tray.

The first thing which strikes you when you peel open the top of the pack, which has a grab handle cut-out, and pull out the inner tray is that it is absolutely crammed full of meal components and accessories. Check the panel on the outside and you will discover the calorific value is in excess of 4,500kcal, which is 25% more than the 3,600kcal of the average NATO 24-hour pack (note US MREs are issued by the meal and not by the day) but this can easily be explained away by the extreme cold experienced by much of the vast Russian nation for half the year or sometimes more.

Unlike the UK or US rations which many readers will be familiar with, the Russian IRP contains foil trays rather than retort pouches; our Menu 5 contained three starters/desserts, three main courses and three spreads – I am not using the term entrée as this can have very different meanings either side of the Atlantic – in foil trays with peel-off lids. In addition the pack contains four packs of eight square crackers, two sweet and two salted, a chocolate bar, fruit (apple) purée sachet, a hot and cold drinks selection, loose accessories and a bagged heater with fuel tablets and windproof waterproof matches with striker. A lot of contents crammed into one two kilo (2013g) pack and more than enough to keep a soldier fuelled for a day.

Goulash, cheese spread, smooth pâté and crackers with Rasperry drink – although a bit thin, the goulash was very tasty [© BM]

So what did it taste like, you’re probably asking. As there are so many calories crammed into this pack and as currently I am sitting in front of a computer for 18 hours a day and consequently not getting much exercise, I have spread intake over three days and I have sampled pretty much everything in the box. Some was very tasty, some was rather bland, and a couple were not really suited to my tastebuds.

Starting with the crackers, which I either dipped (salted) or spread (sweet), these look and taste quite similar to a UK commercial brand stocked in most supermarkets, though they are thicker and smaller as is to be expected in a ration pack which may be rough handled, but they smell a little different – not unpleasantly so, just different. The three spreads in my pack were a smooth and a coarse pâté and a processed cheese – very reminiscent of the old ‘Cheese Possessed’ issued in British ration packs at the end of the last century and very rubbery.

The three main course trays were, according to Google Translate, Goulash with Potatoes, Rice with Chicken and Vegetables, and Beef Stew First Grade. I started with the goulash and really enjoyed it, though the beef was not the best of cuts, and I found it needed no seasoning whatsoever. Next day it was the rice dish which, though it did not look particularly appetising, was actually okay even though it was rather compressed and there were no appreciable lumps of chicken to see. I left the beef stew until the last day thinking it might be the best of the bunch, but I suspect somebody may have confused first grade with fifth; inside the tray I found just lumps of braised beef in very greasy clear juices reminiscent of weak Oxo with none of the anticipated potatoes or vegetables one expects in a stew.

Although the beef stew was not brilliant, it was edible and if I was stuck in a slit trench on the steppes I suspect it would have been quite satisfying, but the Salty Preserved Salted Salmon (assuming my translation is correct) starter dish was both very fatty and not at all to my liking; this was the only tray I could not stomach, even though I first sampled it cold and then heated it up to see if it got better. The Apple Purée desert, on the other hand was excellent (as was the sachet of Apple Preserve) and the Vegetable Caviare (according to Google) was very tasty too; I heated this up, sprinkled pepper on it, and then dipped my crackers into it.

To see more images of contents click through to this album.

Although a fold-up stove with hexi tablets and matches is included, I heated my foil trays by sitting them in a pan of near boiling water for a few minutes. The stove is much smaller than even the small one found in the French ration pack, so it is not as stable as one might like, but it probably does the job. One day I may try out a few different ration pack hexi stoves and tablets for a comparison in stable conditions.

Finally to the brew kit: this contains two teabags in foil sachets, one freeze-dried coffee sachet which I found to be surprisingly palatable, and three sachets of cold drinks powder – Peach, Raspberry & Cherry – which require 200ml of water to reconstitute. Three sugar and one creamer sachets are also included, along with rock salt and ground pepper plus chewing gum for dental hygiene , moist towelettes, a single serviette, three plastic spoons, a knife, sterilising tablets and a multivitamin tablet. All in all, a pretty comprehensive ration pack.