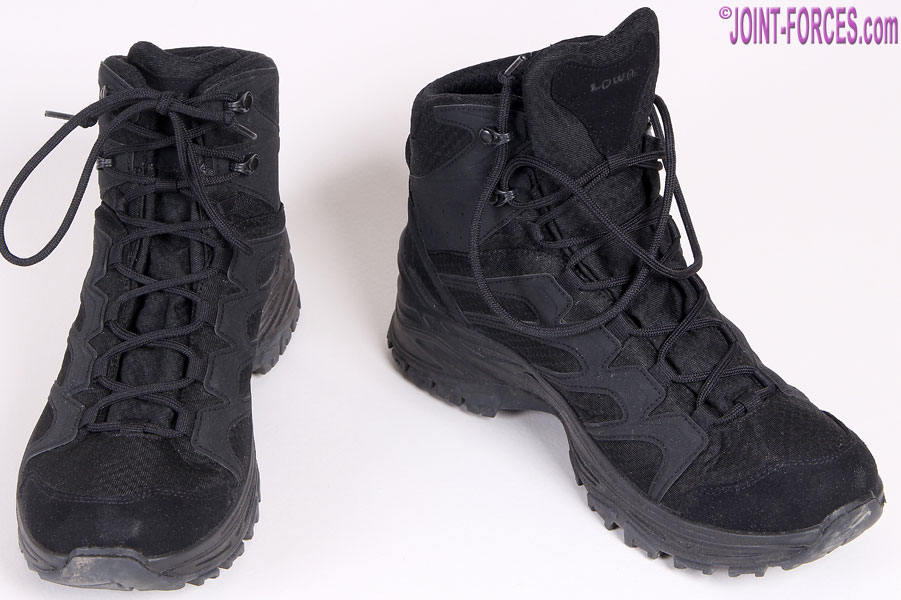 The ultra-lightweight LOWA INNOX mid-height four-season tactical boot has been available on the UK market for almost three years now but it is still one of my personal favourites.

One of a clutch of ground-breaking new generation  lightweight boots produced in close cooperation with W.L. Gore & Associates’ specialist footwear division in Bavaria, by a group of boot manufacturers catering for the military and blue light services sectors, the LOWA INNOX uses the revolutionary Gore-Tex Pearl 3L Extended Comfort lining.

Although intended primarily as a year-round multifunction base and patrol boot, rather than a full-on combat boot, the INNOX quickly proved popular with specialist police and military personnel allowed greater leeway in footwear choice; I have spotted Czech, French, Lithuanian, Polish and US Spec/Ops or SF personnel all wearing this particular boot model, in theatres ranging from the Baltic to the Middle East.

LOWA, a company founded in Bavaria 95 years ago by Lorenz Wagner, started manufacturing military footwear before World War II and still supply the German Armed Forces to this day, so they know a thing or two about combat boots. In 2014 they introduced the first of the new construction lightweight boots from the now very popular ZEPHYR family, using the new generation Gore-Tex Performance Comfort lining, and the even lighter INNOX model with the new Gore-Tex Extended Comfort lining followed by the end of the year.

The INNOX is a slip-lasted, mid-height, injected sole boot with minimum 1.3mm thick microfibre fabric uppers reinforced with a suede-like skeletal stitched framework and nubuck leather toecap and heel, which tips the scales at around 450 grammes for an average sized boot; my larger than average UK 10.5/ EU45 boots weigh just 535g apiece.

The lacing system comprises fabric loops, five each side, for the foot section plus two pairs of upper closed hooks at the top for speedy donning as well as a fabric loop on the padded bellows-type tongue to keep it central. The injected sole is LOWA‘s own composite polyurethane and rubber NXT pattern which I find produces great grip across a range of terrains and surfaces.

Although I have worn these black INNOX boots for well over a month, including on a trip to the Rhineland where the thermometer was still below -10C an hour after sunrise one morning and then in the snows of the Pennine foothills a couple of days later, I knew they would give me no problems as I have previously beasted (literally) a Coyote Brown pair from the first production batch.

The next section is from a follow-up review I penned for the now sadly defunct C&S Magazine last year and it is worth repeating as I believe it shows what these lightweight Gore-Tex lining boots are capable off:-

“I received these boots for review in mid-August 2015 and over the next twelve months, until the AKU PILGRIM HL GTX boots in MoD Brown were delivered for review, the INNOX boots stayed on my feet almost every day from before dawn to bedtime. During this extended test period I took these LOWA boots on every assignment including, among others; SOUTHWEST WADER, on the Cornish Coast; TRIDENT JUNCTURE, held on Spain’s Chinchilla and San Gregorio training areas and the beach at Tróia in Portugal; TRACTABLE and GRIFFIN STRIKE, on Salisbury Plain; SHAMAL STORM, WARRIOR COMPETITION and SOFEX, in Jordan, with a weekend in Petra in between the last two on my second visit; and ANAKONDA, visiting four different Polish training areas over two weeks.

“Not content with that, I also wore these boots on Dartmoor and on many beach walks in Devon during my down time, in conditions ranging from deep snow to peat bog to sun-baked dunes to wet shingle and even now [almost two years on] I still wear them with jeans when down my local or on CAMRA ale survey trips. I think it is safe to say, even though I have reduced the sole tread to next to nothing by pounding all imaginable surfaces and worn the heels down by driving thousands of miles, I still love these boots.”

I concluded by saying: “These unassuming mid-height new generation Gore-Tex Performance Comfort breathable waterproof membrane boots really have gone above and beyond the call of duty.” I suspect my new black INNOX boots will give me equally sterling service.

To buy the INNOX, which is also available as a Safety Boot with steel toecap in addition to the Police (i.e. Black) and Military (i.e. Coyote Tan) colours and comes in UK half sizes from 6.5 to 13, go to LowaMilitaryBoots.com

Boots, Featured, Footwear, Gore-Tex, Innox, Lowa
You may also like