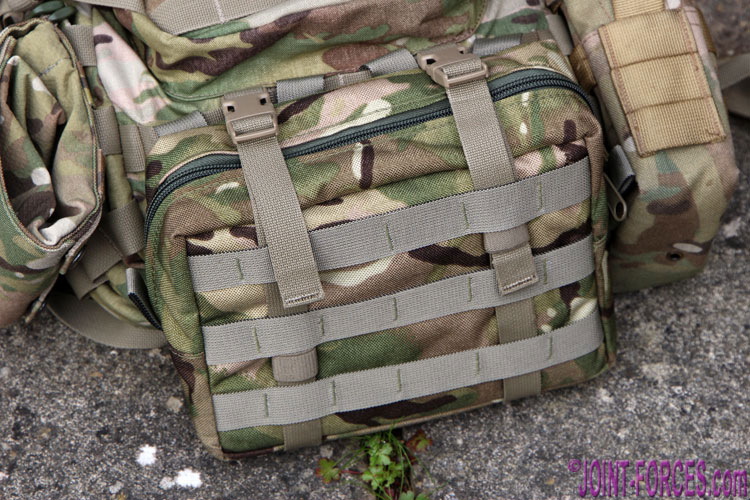 MARAUDER is a well-established British brand name for bergens, packs, pouches and accessories etc. produced by Extra-Range UK of Manchester.

I first came across Extra-Range, and its larger than life owner Rick Ferguson, at a trade show in Harrogate almost 20 years ago. To say Rick, who sadly passed away in 2015, was one of the industry’s characters is a gross understatement – the guy was, quite simply, one of a kind.

Both the MARAUDER brand and the Extra-Range name are being taken forward by Rick’s designer partner, Lesya, and his son Valentin with new products being added as well as production of the old favourites continuing. Mike Gormley and I bumped into the MARAUDER team at the Outdoor Military Show (OMS 18) trade event in Exeter in February, where they were displaying pretty much the full range, and two of their specialist MOLLE/PALS pouches produced in MTP camo immediately caught my attention.

First a brief word about MOLLE/PALS: MOLLE stands for Modular Lightweight Load-carrying Equipment, a system conceived in the mid- to late-1990s to replace the US Army’s All-purpose Lightweight Individual Carrying Equipment or ALICE, and PALS stands for the Pouch Attachment Ladder System used on the original MOLLE equipment but now widely adopted around the globe. Pouches with vertical straps intended for fitting to horizontal PALS tapes on tapes on rucksacks and load belts etc. are referred to as MOLLE-compliant.

These days it is very unusual for military load carriage equipment to be designed without PALS tapes, though relatively recently some manufacturers have introduced horizontal laser-cut slots in outer fabric panels as a lightweight alternative to tapes. Having PALS tapes on the outside of rucksacks and load vests, and sometimes on the outer face of pouches too, allows the user to configure the basic issue load carriage equipment to better suit their precise role &/or operational needs.

Once most soldiers have configured their personal load carriage equipment for their specific role they will seldom change the basics, as one always needs to be able to instantly go to the correct pouch for items needed in a hurry, but during the lifetime of their kit they will most likely add pouches and tweak the order to make life easier. In my role as a photographer / journalist the kit I require often varies, dependent on factors such as method of travel (air, rail, vehicle etc.) and duration of assignment, so my daysack can expand quite dramatically with external pouches and so can my bergen.

Two non-standard MARAUDER pouches, both large zipped horizontal utility type, on the Extra-Range display stand at OMS 18 caught my eye and I proffed them for review at the end of the two-day show. The smaller of the two measures at least 9″x7″x3″ (roughly 230x180x80mm) and the larger is at least 13″x7″x3″ (330x180x80mm). Manufactured from 1000 Denier Multi-Terrain Pattern fabric, produced by a UK MoD certified supplier, each pouch has three horizontal PALS tapes on the front face and either four or six vertical PALS tapes with press stud fasteners on the rear. Zips are double action, running the full width at the top and partially down each side to give good access.

I read a lot on my travels, so always carry a couple of novels (one part-read and one unstarted) in my daysack and the smaller of these MARAUDER horizontal pouches is better sized for this than the standard vertical utility pouch. However in the accompanying photos it is attached to the bottom rows of PALS tapes on my SOURCE Assault 20 daysack, retained by the buckled straps  on the base of the daysack, and is being used to transport a spare pack of JOINT-FORCES flyers for distribution at the DPRTE expo in Cardiff in March.

The larger of the MARAUDER pouches featured here, their Bergen Maxi Load Front Pouch, is just the right shape and capacity for my Size 10  MAGNUM Service Trainers, so is strapped to the three rows of PALS tapes at the base of my KARRIFOR SF THOR 40 patrol pack. When on assignments I often carry a pair of service trainers as back-up footwear and to give me something a little more suited for tackling the pedals of hire cars than combat boots, and this external pouch allows me to both keep trainers separate from clothing and also access them speedily when moving from plane to car.

If interested in bulk ordering specialist pouches or bags/packs go to extra-range.co.uk/. Several of our Sponsors, most notably John Bull Clothing and Survival Aids, stock MARAUDER packs, rucksacks and pouches. Extra-Range, Featured, Marauder, MOLLE, PALS, pouches
You may also like