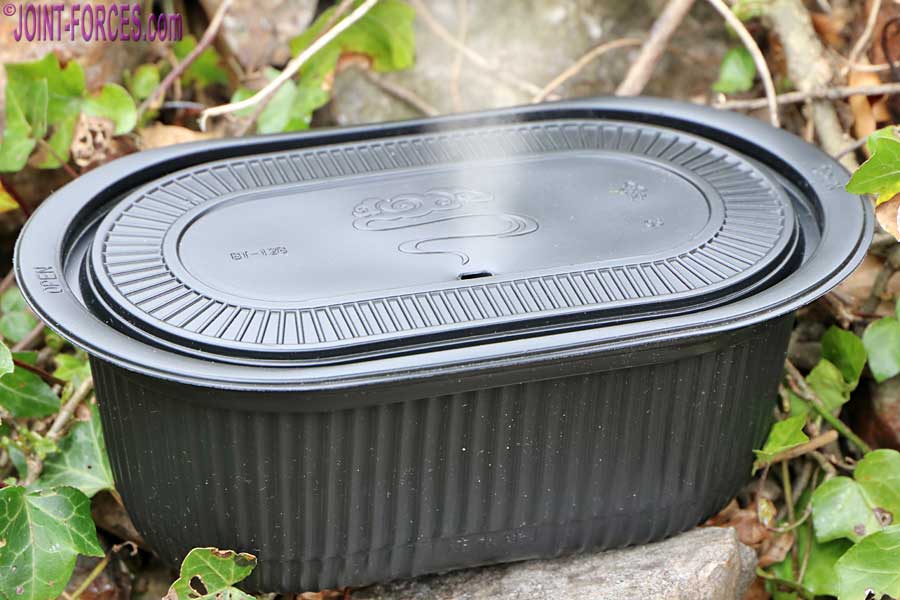 We first spotted HEAT2EAT Self-Steamers at a trade show a little while back but it is only recently that I have had the chance to try one out, writes Bob Morrison.

Although not the standard type of military ration heater, and indeed these are marketed primarily at the Camping / Trekking / Outdoors / Festival-Goer etc. markets, I reckon HEAT2EAT Self-Steamers (distributed in the UK by H2E World Ltd of Yorkshire) do have some potential as ration heaters so I am placing this review in both our RATIONS and REVIEWS sections. Mike Gormley also ‘proffed’ one at this year’s Outdoor Trades Show in Liverpool, which regrettably I was unable to attend as it clashed with my KASOTC assignment, and he has plans to review its performance from a hiker’s perspective on one of his forthcoming treks.

HEAT2EAT Self-Steamers work in a somewhat similar fashion to Flameless Ration Heaters, using a water-activated chemical pad called a HeatStone to generate sufficient energy to warm a pre-cooked meal, but where they are different is in the way that they generate steam to circulate around the food and thereby heat it throughout rather than warming a food pouch by direct contact. The Self-Steamer package consists of a plastic bowl and lid plus a separate food tray, into which about 200 cc/ml of tap or spring water needs to be added to the marked line inside the bowl and then the HeatStone is slipped into this before the food in its tray is positioned above and the lid snapped shut. Leave the whole assembly sitting on a flat and heatproof surface (e.g. a rock, log or heavy duty plate) to steam away for twenty to thirty minutes and your food should be piping hot and ready to eat.

A ration pack ‘boil-in-the-bag’ main meal retort pouch is probably the ideal and most simple foodstuff to prepare in the Self-Steamer, as other than tearing open the pouch and spooning the contents in to the food tray there is little more effort needed, but pretty much any type of pre-cooked food will work in it. Tinned foods such as soups and stews are great for this heating method, supermarket ready meals are good to go too, and fish and vegetables which only need gentle steaming to cook are ideal, but it doesn’t stop there. Part-cooked rice and noodles can usually be steamed, as can tinned beans, pulses and vegetables etc., and of course it is even possible to poach eggs in a Self-Steamer. However for the accompanying photos I used the contents of a freeze-dried meal pouch in my simple trial.

I have had a spare pouch of Polish ‘ELENA’ brand LUNCH MIX – Beef with Tomatoes & Mushrooms, or MIESZANKA OBIADOWA – Wołowina z Pomidorami i Pieczarkami, as found in some Baltic Region ration packs, which really needed to be eaten as had been hanging around for quite some time and was slightly beyond its Best Before date. It struck me as a good idea to try this out in the HEAT2EAT Self-Steamer at the weekend as steaming is not only said to be the best way to properly reconstitute and warm up freeze-dried / dehydrated foods, but this method of heating is also said to preserve flavours much better than oven or microwave reheating; this LUNCH MIX meal contains a lot of different herbs, which steaming definitely brought out the taste of.

HEAT2EAT Self-Steamers come in different shapes (round / oval / rectangular / square etc.) and sizes (small / medium) and food trays can be divided or plain; in this case I used a medium oval type with divided tray. If I had one of the rectangular types with a foil, rather than semi-reusable plastic, tray I could have just added the stipulated amount of water to the pouch, resealed it, and then heated it for the recommended time. Instead, I added 300ml of water to the pouch, gave it a damn good stir to ensure proper mixing, then decanted it into the divided tray for conventional steaming. Not only was the meal nicely heated after half an hour, by which time the Self-Steamer had stopped impersonating a volcano, but the results were superb on the taste buds. I have enjoyed this particular Polish LUNCH MIX a couple of times in the past, but this time it seemed even tastier.

Each medium size HEAT2EAT Self-Steamer is currently despatched with two 80g HeatStones, so I plan to use my second ‘stone’ on a Blå Band freeze-dried Oriental Chicken with Couscous pouch from a Swedish 24-hour ration pack which Carl liberated for me during COLD RESPONSE earlier this year. It will be intriguing to confirm if steaming really does enhance the flavour of lyophilised (freeze-dried) meals, or if that Polish dish is just super tasty.

As I mentioned at the start, these recyclable plastic bowl / lid / tray self-steamer combinations might not be ideal for military use, not least because the bowls are quite bulky and each HeatStone would add 80g or 100g to the soldier’s load when a standard issue Flameless Ration Heater with heater pouch only weighs 20g. However they could possibly come in handy for troops travelling in vehicles (i.e. those without a British Army issue Boiling Vessel, of course) or based in a forward operating base without proper cooking facilities, as they do more than just heat retort pouches. I am told HeatStones are quite popular in some rural parts of the Far East where electricity is by no means guaranteed, and I suspect they could be useful in Humanitarian Assistance settings too. HeatStones could also be useful as a simple back-up for when the gas supply is turned off or the electricity fails… which, with all the problems doing the rounds at the moment, might not be as far off as some of us might wish.