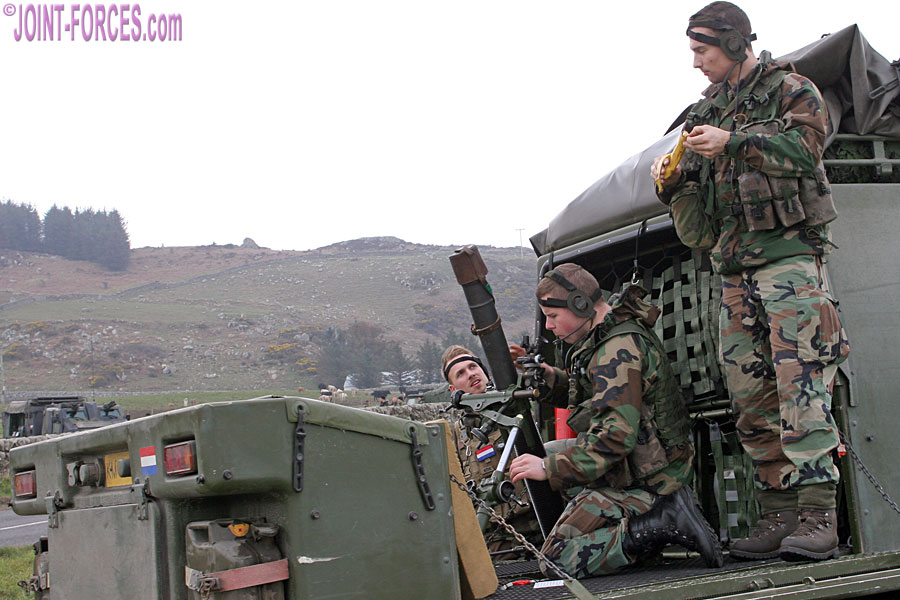 Dutch mortar team setting up on JOINT WARRIOR 14-1 ~ it is not unusual for rations to be supplemented with fresh fruit in the field, like the banana being consumed on the right, to break up the monotony [©BM]

In the first of my three Dutch rations articles I looked at the Gevechtsrantsoen Ontbijt + Lunch Voor 24 Uur (or Combat Ration Breakfast & Lunch For 24 Hours) pack with 2008 expiry date and for this article I am moving forwards six years to focus on the Handelsgebruikelijke Ontbijt / Lunch Componenten (Commercial Breakfast / Lunch Components) ration as packed in December 2013 with a June 2014 expiry date.

The November 2008 expiry date ration consisted of a cardboard carton plus a separately distributed canned main meal course but by 2014 the carton, as issued to Dutch Marines on JOINT WARRIOR 14-1 in Scotland, was accompanied by more modern foil retort pouches. Issued to Marines coming ashore in Luce Bay in March, when the temperature was still very low and a higher daily calorie intake was desirable, two main course retort pouches were issued per man.

Both 400g retort pouches given to me, along with an unopened carton, were commercially produced in The Netherlands, by Kingsfood of Voorthuizen, and could be eaten either hot or cold. For both maximum nutrition and high morale it is best to heat meals and, just like their British equivalents, these pouches required seven to eight minutes immersion in boiling water to heat thoroughly. Pouch contents were Spinazie met Vleesballetjes (Spinach with Meatballs) and Hachee met Parijse Aardappelen (Stew with Parisian Potatoes) and both were of high quality.

Turning now to the main carton, almost half of its volume was taken up by a box of twelve BAKKERS CRACKERS, packed in fours and wrapped in cellophane, for which various jams and spreads in foil topped tubs were included. There were also two individually wrapped caramel waffles included along with a block of very good quality high calorie chocolate; I have never been a chocoholic – that vice is Ramilla’s – but I am not averse to the chocolate bars found in some European ration packs, though medically I have to be a little bit careful over how much I consume.

Our Dutch friends must have sweet teeth as the drinks powders supplied included two of cocoa in addition to two coffee sachets, two tea bags, two stock sachets and a fruit energy drink sachet. Continuing with the sweet tooth theme, there were also a stick of soft mints, two sticks of hard dextrose tablets and a pack of mint tooth-cleaning chewing gum. Other accessories included a pack of tissues, a box of Swedish matches, toothpicks, sugar, salt and creamer for the coffee. Some of these ancillary items were protected from damp by being contained in small resealable plastic bags inside the main carton.

Like the Dutch ration pack from 2008, I would say that the best feature about this Commercial Components ration is that it is ideal for snacking for those constantly on the move, but I again suspect that some of the contents might get a bit repetitious.

For the third article I plan to look at a bagged ration as issued to Dutch mechanised infantry, tasked to the NATO eFP mission, on Exercise IRON WOLF 17 in Lithuania.