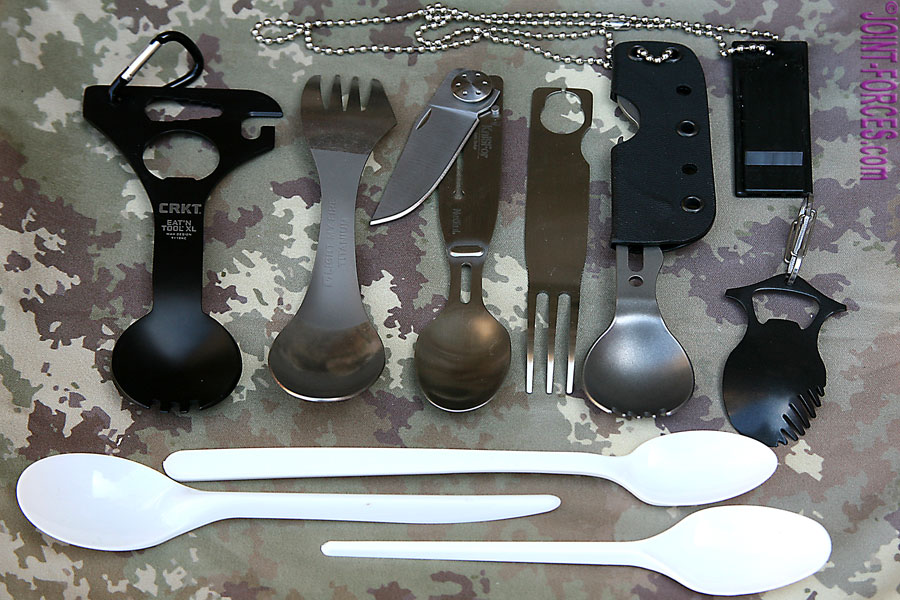 Many ration packs supply at least one disposable plastic spoon or spork but often these are quite flimsy articles which can snap when you most need them, writes Bob Morrison.

If you carry your own eating utensils, or even just a simple combination spork or similar, in your daysack you will always have something to shovel up your food should the implements in your ration pack, which can sometimes include a usually quite brittle plastic knife and fork too, let you down at the last moment.

About three years ago I asked UK distributors Heinnie Haynes what some of their best sellers in this field were so I could pen a review and as all of these have stayed the course, with at least one of them always being in my daysack (or my hold luggage when flying, to avoid issues with airport security) when I am off on assignment, a reprise seemed in order.

Running from left to right on the lead image, we start with the XL version of the Eat’N Tool from CRKT (Columbia River Knife & Tool). Then we have the Titanium Spork from Light My Fire. In the centre of the array is the two-piece KniSFor combination from NexTool. To the right of this is the F.O.R.K.IT from TOPS-USA and, finally, there is the little com2eat, also from NexTool. At the bottom of the shot to give a rough size comparison I placed three typical plastic spoons, of different bowl sizes, taken from military ration packs.

Eat’N Tool XL: This is essentially a longer (152mm / 6”) version of the original CRKT Eat’N Tool and has a similar spoon bowl with serrated lead edge (spork) but a longer handle. The large hole in the handle is a bottle opener, but also gives a finger hole for more stable grip in cold &/or wet conditions, and the slot near the top forms basic spanners in five sizes from ¼” to ½” inclusive. There is also a pry / can opener built-in and the Eat’N Tool comes with a small carabiner which can be handy for stopping it walking. I carry this one a lot as a back-up because it has so many different uses.

Titanium Spork: This one is from Swedish company Light My Fire who have previously produced this handy spoon and fork combination, as the Original Spork, in plastic and in over 20 colours. The Original Spork is great for campers, and indeed thousands have been using these for years, but if deploying on military operations or extended tours you need to count on your eating implement being unbreakable for the duration. This is where the Titanium Spork stands up to be counted, as the material it is made from makes it pretty much indestructible – unless, possibly, used as a mine probe, which is NOT its intended purpose even if it is non-magnetic. Weighing in at just 17 grammes it is very light indeed and as it is non-corrosive you won’t end up with rust in your sausage & beans. This is one of my favourite eating implements when on the move.

KniSFor: This is a stacking knife, fork and spoon combination from NexTool, which the makers describe as an all-in-one outdoors multi-function dining tool. A modern variation of the old stacking army cutlery set – it won a 2016/17 ISPO Award – it breaks down into a fork and a combined knife and spoon. The beauty of this one is that it has a proper locking knife blade capable of cutting raw fruit and veg, but the downside is that you may not be able carry it in peacetime urban environments and you will definitely have problems if you try to carry it onto planes.

F.O.R.K.IT: This is the slightly unusual one of the bunch. Made by TOPS-USA., this is a stone-washed finish carbon steel combination knife and spork, with bottle opener included, which comes with a neat Kydex sheath, neck chain and accompanying survival whistle. In some ways this is designed more for the outdoorsman and survivalist, or prepper, than the soldier but it will not go amiss in the side pouch of a bergen or at the foot of a daysack.

com2eat: Finally we have the little also from NexTool, which is probably best described as an emergency spork with bottle opener. On this implement the fork tines are on the side of the spoon bowl and as it is so small it is really best thought of as a back-up. One for the Survival Tin or Grab Bag perhaps?

As mentioned above, I carry the Eat’N Tool XL with me quite a lot as it is both a usable spork and a useful tool. In the final shot here it is resting atop a reconstituted ELENA Lunch Mix (Millet Groat with Chicken version) pouch, as found in some Polish rations supplied by KADAR, decanted into my Wildo CAMP-A-BOX bowl. This lightweight meal, which requires 300ml of hot water and 15 minutes standing time, was just as tasty as the Buckwheat Groat Lunch Mix and I really enjoyed it.