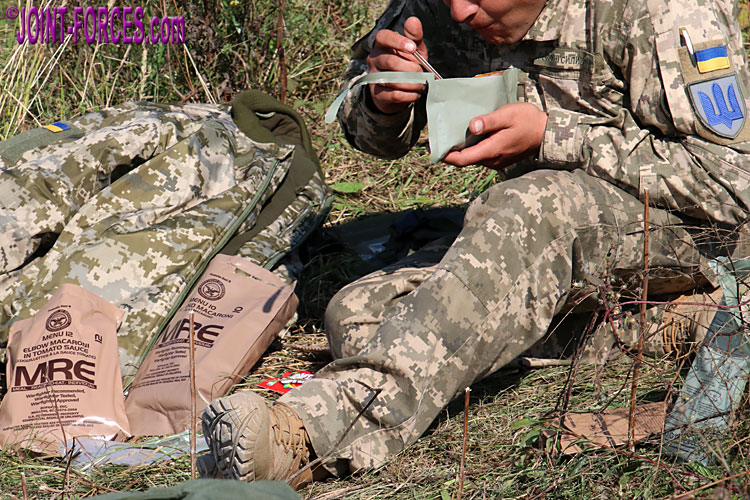 For this eleventh article on the US MRE evolution I am looking at a Year 39 or XXXIX ration representative of the 2019 production batch, writes Bob Morrison.

In this final, for the moment, US MRE article I am turning my attention to the only meal out of 24 Menus that I would consider to be a Breakfast, namely #20 Hash Brown Potatoes with Bacon, Peppers & Onions.

Variations of Hash Brown Potatoes with Bacon have been part of the MRE menu choice almost since the first packs were issued nearly four decades ago and they appear to be quite liked by troops as it is not often that you find this meal hanging around once a carton has been opened. In addition to the main meal, or entrée as our American friends call it even though this French culinary term should refer to the starter, Menu #20 also contains a sachet of branded (Mountain House) freeze-dried Granola with Milk & Blueberries which in my mind makes it very much a breakfast rather than a lunch or dinner. At this stage I should probably point out that the potato element of the hash browns is not fried / oven baked after boiling as one used to having breakfast in American-style burger chains (or a pub breakfast in ‘spoons) might expect, merely diced and boiled, but do not let that put you off as this one makes a great first hot meal of the day and I do not understand why statistically only one soldier out of every two dozen gets this option.

The full contents of my 2019 MRE, going by the date codes on individual items probably packed around the beginning of March this year, from a batch issued to US and Ukrainian troops on Exercise RAPID TRIDENT on Yavoriv Training Area in mid to late September, were: Hash Brown Potatoes with Bacon, Peppers and Onions; Granola with Milk and Blueberries; First Strike Bar, Rasp-Cranberry; Cheese Spread, Cheddar, Plain; Crackers, Plain; Peanuts, Salted, Dry Roasted; Beverage Base, Sweetened with Non-nutritive Sweetener, Fortified, Orange; Accessory Packet A; Spoon; Flameless Ration Heater; Bag, Hot Beverage; and Paperboard Sleeve. If you have been following this mini-series there should be no surprises there but I should possibly draw attention to the First Strike Bar as this has been substituted for the listed Filled Bakery Item (on the original XXXIX list this was specified as being the Apple Turnover). Such substitutions are not unknown and the US Army Defense Logistics Agency clearly states “The ration assemblers may request a substitution for items that they are having difficulty obtaining or producing.”

This ration was packed by The Wornick Company of Cincinnati who are one of three long-established MRE suppliers to the US DoD, the other two being AmeriQual Group of Indiana and SOPAKCO Packaging of South Carolina. Other than the odd item substitution on logistics grounds, theoretically there should be little difference between individual rations packed by any of the three companies. As previously explained in one of my MRE articles, there are three different types of outer pouch artwork approved for use but the actual artwork type used is no indicator of the packer; other than the name & address block being different. The MREs in the lead image, which have different pouch artwork, were packed by SOPAKCO and were from a Carton A selection, but I spotted both packers’ meals on issue to Ukrainian troops during the exercise.

One final small point about MRE Accessory Packets. Three different combinations are issued – A, B & C – and these are specific to the actual meal. In this case Packet A is specified and it, like Packet C, has sachets of coffee powder and creamer in addition to the Chewing Gum, Salt, Hand Wipe or Towelette, and Toilet Tissue found in all three packets. The one thing Packet A has which is not found in B or C is a tan-coloured book of 20 Safety Matches. As a Flameless Ration Heater is included with every current issue MRE it is probably fair to assume that these are intended for fire lighting and water boiling rather than main meal heating.

It is highly unlikely that I will get my hands on a Year 40 or XL production batch MRE before the DEFENDER EUROPE 2020 deployment exercise, which is planned to be like a ReForGer for the 21st Century, in late spring and even then it might well beXXXVIII or XXXIX batch meals supplied as both would still be in date. My next US Rations article is therefore likely to be on the Halal Meal, which it should be noted is not technically an MRE.