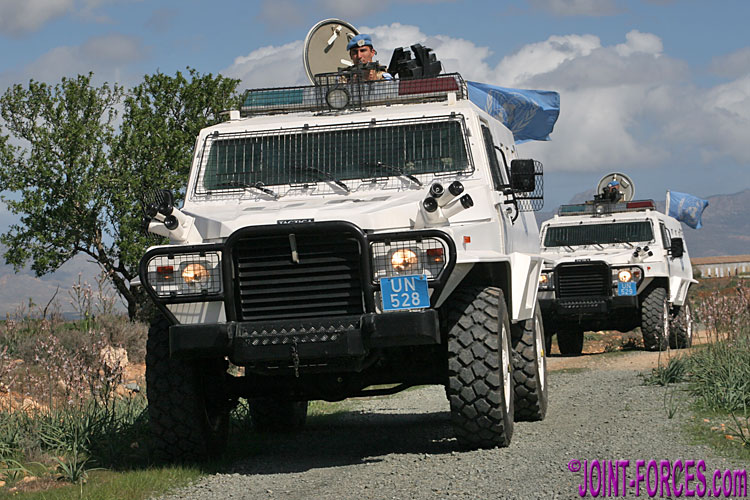 At first glance this Patrol Combat Ration Pack appears to be one of the latest UK MoD rations but of course initial appearances can be deceptive, writes Bob Morrison.

Closer inspection of the tan outer bag reveals the notification CONSOMMATION RÉSERVÉE À L’ONU on one side and if the French language is unfamiliar to the viewer the words UN CONSUMPTION ONLY on the other side should give away the fact that this pack is meant for United Nations troops.

As you might have guessed, these rations are indeed produced by the British company responsible for UK Forces rations packs, but the contents are not identical and at 2,000kcal their calorific value is between that of a Single Meal ration and a 24-Hour Operational Ration Pack. Some of the edible contents are similar or identical to those found in British rations, but there are quite marked differences in some of the main meal retort pouches and there is not as much variety as British troops have become accustomed to expect. Having said that, I have identified three different menu choices in three different categories – Halal, Hindu and Occidental – and I suspect there might be three more menus in the Vegetarian category, although at present I have only identified one. (I will update this article if I discover more).

On the bilingual (English and French) ‘Instructions for Use’ panel on the Menu Contents and Instructions Sheet it states: “This Patrol CRP has enough food to provide 2000 kcals, equivalent to half your daily energy requirement. It contains a balance of all nutrients, vitamins and minerals – you should eat all food items to maintain good health and performance. The meal pouches can be eaten hot or cold…”.

As mentioned, a Flameless Ration Heater is also included. This is similar in concept to the heater found in US MREs but it is slightly larger to accept the bigger British-style 350g retort pouch. I plan to pen a short feature on the FRH topic in the not too distant future as I have just finished testing a selection of 2017, 2018 and 2019 MREs picked up on my recent(ish) travels and I used each of the included heaters to warm the main meal components.

As for this UN Patrol Combat Ration Pack, Occidental Menu 1, the Beef Curry was spicy but not at all fiery and was packed full of flavour. In addition to beef it had both potato and chick pea and I found it to be very nourishing. The Bun Cinnamon was the same as the one found in some UK Operational Ration Packs and is one of my favourites. Now if only they could come up with self-heating Devon Custard to go with this one they’d be onto a real winner. The fruit pastille block and the sesame seed bar are both high energy snacks; I liked the pastille but was not too keen on the sticky seed bar. The Chockablock Bar is a bit sickly, but is also a high energy snack and has its use. The fruit & nut mix needs no explanation and neither do the drinks powders. Interestingly, neither tea nor coffee are provided.

These rations, which have a shelf life of a little over two years, will last considerably longer if stored properly. As each outer bag has a Fresh-Check indicator sticker on the outside it is easy to determine whether or not the pack has been properly stored. Incidentally, should an reader be interested in buying wholesale quantities of these rations packs, our friends at East-West Army Surplus have recently secured a very large consignment (pallets rather than cartons) of UN surplus through authorised channels. Like the pack featured here, which the lads supplied, these have over six months of shelf life before their Best Before date is reached – but for emergency use they will, of course, still be nourishing and edible long after that.