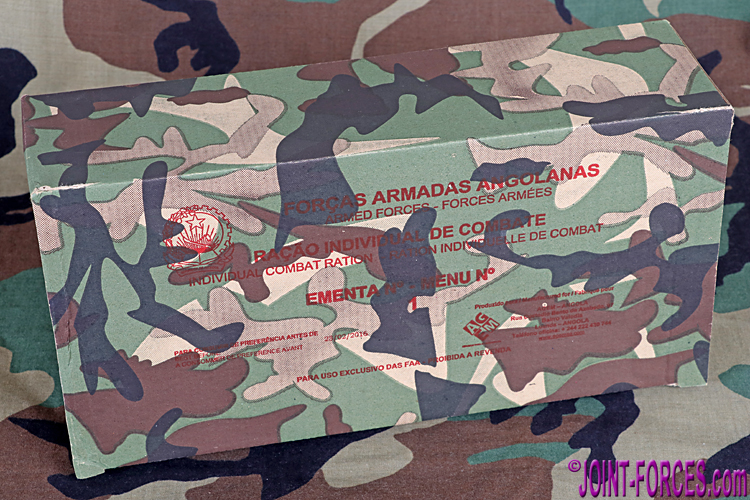 Unlike the Angolan ration pack featured in Part 35, of which I was unsure of provenance and also considered it to be too degraded by the passage of time to eat, I know precisely where this pack came from and as it’s contents were in date I was more than happy to taste test it.

Assembled by Spanish logistics and services provider Ucalsa, who over the last 15 years have provided nationally and internationally on average close to a million ration packs every year, this sample pack was personally picked up from their stand at the FEINDEF military expo in Madrid at the end of May. One of several display examples of ration packs produced for African countries, other than its cellophane outer wrapper having been taken off and its fuel tablets and matches removed on safety grounds, this Angolan Armed Forces 24-hour pack was complete. As it included a contents list, in Portuguese, I was able to tick off every item to ensure it was complete.

Starting with the thin corrugated cardboard carton, which is printed with a rough interpretation of M81 Woodland camo, this measures 330 x 165 x 90mm and though it appears from its length to be quite bulky it is actually about 7% less in volume than the UK 24-hour Operational Ration Pack. The printing on the lid is in dark red ink, meaning it can be difficult to read on the brown and black areas of the pattern, and close inspection reveals a packing date of 2016 even though some of the contents were produced in 2018; I suspect that as this was a display sample which has probably done the rounds the contents have been repacked into an older but better condition box. Close inspection reveals it was packed for the Angolan branch of Spanish products and services supplier Grupo AGEM.

Like its predecessor, this ration pack uses cans rather than pouches for the main meals. On the contents list components are broken down into: Breakfast, Lunch, Dinner, Food Supplements and Non-food Supplements. In the accompanying images of Menu 1 contents I have followed this breakdown. As calorific value is quite high and I sampled the RIC during a sedentary period , I consumed this ration over two days rather than one.

Breakfast, as listed, consists of: 2x Coffee sachets; 2x Tea sachets; 2x Condensed Milk sachets; a 125g pack of 21 Sweet Biscuits; 2x 20g Apricot Jam; 1x 200ml Orange Juice Drink carton; and 1x 200ml Pineapple Juice Drink carton. Of course no right-thinking soldier in the field is going to consume all of these drinks at breakfast time, but would spread them out over three mealtimes. Although a bit crumbly the sweet biscuits (crackers) were okay and, as is to be expected of Spanish fruit conserves, the Apricot Jam was really tasty. Washed down with a Juice Drink, the biscuits and jam gave a pleasant breakfast which required little in the way of preparation and there were still plenty of biscuits left over for snacking with tea or coffee later in the day.

The primary Lunch components are: a 415g can of Feijoada á Transmontana, which is a traditional Portuguese bean stew with pork belly and chorizo sausage; Pâté de Figado or liver pâté; and 2x Doce de Maça, which is apple purée. I found the bean stew to be a bit watery, and the pork belly to be too fatty for my personal taste, but as some fat is needed to ensure a balanced diet for soldiers deployed in the field I comprehend why the meat was not leaner. I spread the pâté on savoury biscuits (see below) and the purée on sweet biscuits held over from breakfast.

The Dinner components are listed as a 415g can of Carne de Porco com Vegetais, or Pork Meatballs with Vegetables, and a 77g can of Atum com Tomate, or Tuna with Tomato. Again the main dish was a little bit watery, but it tasted nice enough, and I crumbled a couple of savoury biscuits into it to thicken the sauce up a bit. My tuna was actually plain, in vegetable oil, but as tuna is one of the fish types I quite like I did not have an issue with that. Incidentally, although a basic can opener is included, all four cans in my ration pack had ring-pull lids so it was not actually needed (I am going to put it in my personal Survival Tin next time I update the contents).

The other edible supplements included: a 125g pack of 21 salted (i.e. savoury) biscuits; 3x 8g Sugar sachets; 2x isotonic drinks powder sachets, one orange and one pineapple; 3x dental chewing gum strips; 2x Salt sachets; 1x 30g nougat bar, packet with nuts; 2x 25g Chocolate blocks, containing what tasted like Rice Krispies for texture; and 2x 5g Glucose tablets for an energy boost. As mentioned above, I used some of the savoury biscuits for my pâté and to bulk up the stew.

The non-edible supplements included: 4x water sterilising tablets; fold-up field heater; can opener; rubbish bag, 10x tissues; bagged cutlery set – knife, fork, spoon & serviette; latex lubricated condom; and a contents list with instructions for the heater, fuel tablets, sterilising tablets and condom on the reverse. As previously stated, my ration pack should also have included matches and hexamine fuel tablets but these had been removed on safety grounds; even if the pack had been sealed I would not have been able to fly with the fuel tablets on a civilian airliner.

¤ In my next article in this series I plan to briefly update readers on Spanish Armed Forces ration packs based on information gleaned from the UTE Raciones España consortium at FEINDEF 2019.