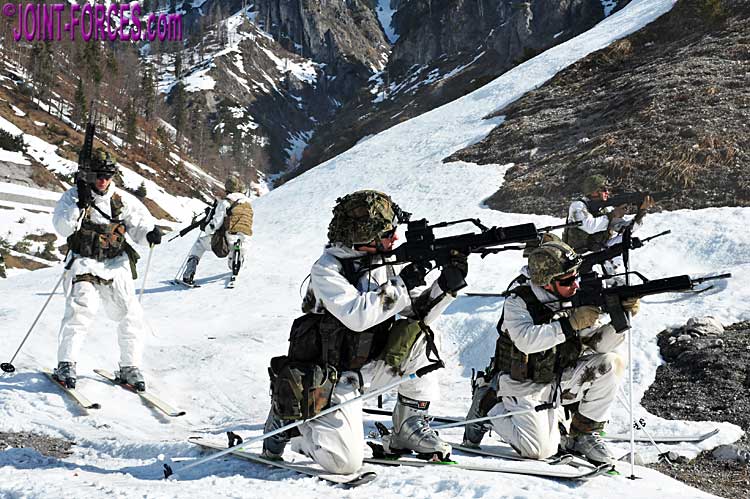 The Einmannpackung, literal translation is One Man Pack, is the name for the German equivalent of the British 24-Hour Operational Ration Pack, writes Bob Morrison.

Before looking at the new Bundeswehr 2019 issue bagged Einmannpackung or EPa, I am revisiting an old review of one of the original four, now increased to ten, lightweight menus in circulation seven years ago and then in the following article will turn my attention to one of the nine heavier boxed menus, which I picked up when covering the NATO eFP mission in the Baltic in the Baltic States in 2017.

The EPa featured here is one of the lightweight menus introduced in 2010 which was issued to German KSK Special Forces, mountain infantry units of Gebirgsjäger brigade 23 and German troops deployed to mountainous areas of Afghanistan. Our man Schulze survived on these rations back in 2012, while on assignment with specialist troops training at over 8,000 feet (2500m) in the Alps, and sent the Typ XI pack illustrated here to me for review in the occasional Marching Ammo series I ran in the now no longer published COMBAT & SURVIVAL Magazine.

Produced by Swiss company Katadyn, famous for their individual water purification systems which account for over 50 percent of world market share, and for the last twelve or so years owners of the Swedish Optimus field stove range, the lightweight Einmannpackung is based mostly around their commercial TREK ‘N EAT freeze-dried foods range. Aimed at the traveller, expedition and sailing markets, TREK ‘N EAT ready made meals are prepared by simply adding boiling water to the zip-locked stand-up retort pouch and leaving to soak for 5-10 minutes (dependent on meal); though if necessary meals can be reconstituted with cold water, but standing time has to be increased. For the record, on one occasion when hungry and unable on tactical grounds to light a stove up in the Alps, Carl reconstituted one of the breakfast muesli meals with cold water and found it to be surprisingly palatable and nourishing.

The Katadyn Einmannpackung is on issue to the armed forces of several nations whose troops have a requirement for optimal nutrition under extreme conditions. According to the manufacturer, each pack is tailored to the customer’s specific requirements, with calorific values ranging from 2500 to 4500 kcal, but although there was a full contents list in German and English on the outside of this 2012 pack no calorie count was included. We suspect from the contents that the German version is at the upper end of the calorific range.

The first thing which struck us about this ration was its size and bulk. When empty and flattened the zip-locked olive green outer pouch measured 400x340mm (15.75×13.4″) and with full contents the base extended to around 250x150mm (10×6″). Above the resealable zip lock near the top there was a carrying handle cut-out and two smaller cut-outs to allow the pouch to be hung. The green outer face and white inner face plastic this pouch was made of was thick and tough, a bit like an MRE outer but not quite as thick. Inside our sample (Menu Typ XI) we found three TREK ‘N EAT main meal retort pouches, a 125g foil pack of twelve square biscuits, canned wholegrain bread (8 round slices, 250g) with a resealable plastic top, a resealable polythene bag containing all the beverages and accessories, and a green plastic spoon to beat all other ‘racing’ spoons. Both the main outer pouch and the polythene bag could be used to stow waste and empty packaging etc.

Our three meal retort pouches were Tropical Fruit Muesli (508kcal), Balkan Risotto (470kcal) and Creamy Pasta with Chicken and Spinach (398kcal). To reconstitute these three meals 835ml of clean drinking water was necessary and in total, including for beverages, 2.5 litres of water were needed. In mountainous, or Arctic, regions finding sufficient water should not be a problem but in arid operational theatres freeze-dried rations can impose a logistic burden. On the positive side, however, the full Einmannpackung only weighed 1.3kg.

German vollkornbrot (wholemeal bread) can be a bit of an acquired taste, and personally I cannot stand the stuff, but on the positive side two tubs of jam (cherry and apricot) and three tubs of spread (ham paste, chicken liver pate and vegetable paste) were included to mask the taste.

The eight round bread slices were stowed in a tin which had a ring-pull top and plastic top to reseal it from the elements. To be honest, I fed half of the bread to the birds, though I washed out the tin as it made a handy reusable container.

Other substantial foodstuffs included two high energy 50g OrifO (a Danish company) cereal bars (cranberry and caramel) of the type many NATO armies now include in their ration packs, a 50g slab of dark and quite bitter German chocolate, and a 125g foil pack (with cardboard inner for protection) of twelve hard but sweet square biscuits. The beverages, all of which required drinking water to reconstitute, included two energy drink powder (lemon and peach flavour) sachets, expresso and cappuccino coffee powder sachets, and two (black and peppermint) teabags, with three sugar sachets for sweetening to taste. Five individually wrapped boiled sweets were also included.

This ration pack was unquestionably of high quality and both Carl and myself (tinned bread excepted, in my case) enjoyed the meals. I am more of a porridge (made with water and slightly salted) person than a meusli person, but I have to say that the Tropical Muesli was very tasty indeed when prepared with hot water. In fact the only potential problem I could see with this ration was the need for almost a litre of water to reconstitute the freeze-dried main meals alone and the inability to eat them cold straight from the pouch without waiting several minutes for them to rehydrate, though of course wet rations would be correspondingly heavier so it is a bit of trade-off.

Finally, there was a handy little seasoning dispenser included. This four compartment container holds salt, pepper, paprika and curry powder, each dispensed through a pop open section of the lid. An eyelet in the lid allows you to attach it to your keyring, or or any split ring, so you don’t lose it. Neat. Incidentally, if you unscrew the eyelet the lid pops off meaning you can refill it and indeed I still use mine nine years down the line.

In the next article in this series I will look at the more numerous standard boxed Einmannpackung with foil tray, rather than freeze-dried, main meal components which was issued on field exercises and NATO eFP missions until quite recently.