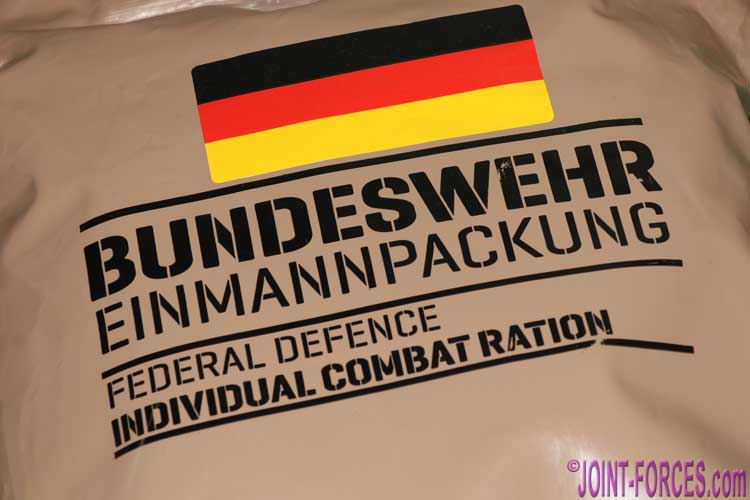 The German Bundeswehr has recently moved away from cardboard cartons to tough polythene pouches to contain its 24-hour Einmannpackung rations, writes Bob Morrison.

Our Senior Correspondent Carl Schulze recently brought back an example of TYP 3 WESTERN, which he was issued on the German-Dutch Exercise GREEN GRIFFIN 19, and we will shortly bring readers a full review of this current German Army ration pack. However, before doing this we will look back at the specialist Einmannpackung issued to German KSK Special Forces and Gebirgsjäger mountain infantry units around 2012 and then at the standard individual combat ration issued to German troops deployed on the NATO eFP mission to the Baltic Nations in 2017.

In 2014, courtesy of the East-West Trading team, I was able to look at, but did not dare taste, a poor condition Angolan Individual Combat Ration dating from around the middle of the last decade. The Angolan Armed Forces are now supplied with combat rations by Spanish company UCALSA, who at the FEINDEF 19 expo kindly gave us a boxed example of the current RAÇÃO INDIVIDUAL DE COMBATE to taste test. Once I have written up the three German articles, I will turn my attention to Angola.

While at FEINDEF 19 I also had a chance to talk in depth to representatives from the UTE Raciones España consortium, who provide the current Spanish Armed Forces ration packs. In addition to reference material to allow me to better understand the range of Spanish combat rations, the UTE team also gave me some samples of tinned products included in the latest issue packs. I will look at this subject once I have cleared the German and Angolan articles.

Finally, when out at Yakima Training Center in Washington State to cover the US Army Joint Warfighting Assessment last month my hosts gave me a current issue Menu 3 (BEEF SHREDDED In Barbecue Sauce) MRE for evaluation. Unless anything more topical come in first, and now that the recent rash of expos and exercises has abated, I will try to review this after the Spanish update. Unfortunately, I have not been able to devote as much time to this Rations section as I would have liked, but with the exercise season easing off for summer things should change.