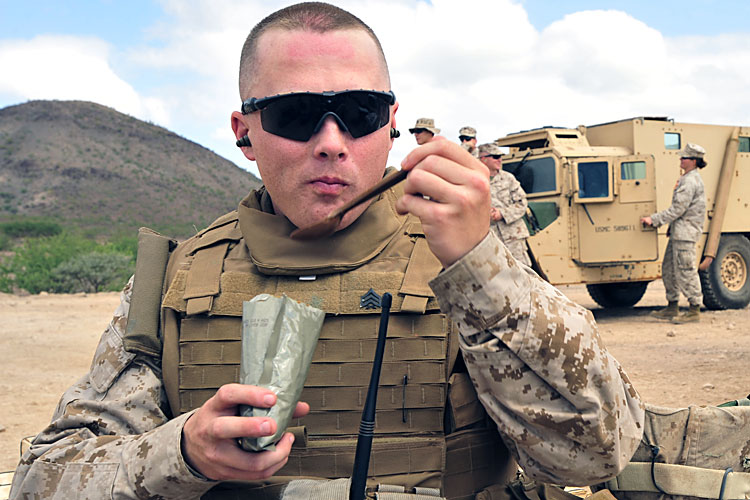 The MRE is intended for temperate and hot climate use – this US Marine was on a lunch break during range training in Djibouti in 2008 [Jesse B Awalt : US Navy]

In this part of the Field Rations series we are looking at the US Army Meal Ready to Eat or MRE from the late 1980s to date, writes Bob Morrison.

From the 1996 production year, Batch XVI, the colour of the MRE outer pouch or bag changed from brown to tan and the variety of menus increased from twelve to sixteen, though essentially the contents did not vary substantially. The Meal Ready to Eat is designed to have a minimum shelf life of three years when stored in temperatures from sub-freezing up to 80 degrees Fahrenheit, or roughly 27 degrees Celsius, though if stored at a constant temperature of around 65F/18C this can be extended to about ten years, and even if kept at 120F/50C the meal should still be both edible and nutritious for a month if stored in its sealed bag.

According to the US Defense Logistics Agency: “The Meal, Ready-To-Eat (MRE) is designed to sustain an individual engaged in heavy activity such as military training or during actual military operations when normal food service facilities are not available. The MRE is a totally self-contained operational ration consisting of a full meal packed in a flexible meal bag. The full bag is lightweight and fits easily into military field clothing pockets.”

In 1997 the standard MRE menu choicewas increased to twenty, and a year later to twenty-four, which is how it remains to the present day; note that today there are also specialist religious variants, but we are concentrating on the standard meals. Twelve different meals are packed in a cardboard carton with a net weight or 22lbs or 10kg, and 48 cartons (24x Type A and 24x Type B) are stowed on a single NATO standard pallet weighing just under half a tonne. Menu Types 1-12 are packed in carton A and 13-24 in carton B.

The contents of an individual tan bag MRE are intended to provide an average of 1250 calories, which is one third of the recommended daily intake for a soldier fighting in a temperate or hot climatic zone. For cold weather there is a totally different variant of the MRE, but more of that later. Every food and drink item in the three pouches issued per man per day should be consumed to ensure that the soldier maintains his (the MRE is naturally designed for the greater male daily requirement) maximum required energy, broken down into 50 percent carbohydrates, 36 percent fat and 13 percent protein, plus his Military Recommended Daily Allowance of vitamins and minerals.

With the exception of the beverages, which require clean water for reconstitution, all edible components are supplied ready to eat and can be consumed cold. However, to achieve maximum calorific benefit it is recommended that the main meal item, the entrée, is heated. This can be achieved by either immersing the bag in hot water or warming the contents in a mess tin over a flame.

About a year after the bulk of troops returned from the 1991 Gulf War the US Military introduced a flameless ration heater into every MRE pouch to allow the soldier in the field to heat his main course relatively easily without needing to light a stove or fire. Manufactured by Zesto-Therm, the ration heater contains water-activated elements in a translucent vacuum sealed pouch. To heat the meal the soldier simply tears open the top of the heater pouch, adds a small of water to the marked line, pops the meal retort pouch inside it, folds the top over, inserts the heater and meal into the box that contained the individual meal pouch, props it at a shallow angle to ensure the element wicks the water properly, then sits back for at least five minutes to allow the flameless heater to do its job.

The tan bag MRE illustrated here, which we picked up on our travels around 2006, dates from after 2000; there was a minor design change to the bag from Batch XXI which allows us to narrow the year of manufacture down a little. From the entrée menu number – No.18, Turkey Breast Patty with Potatoes in Gravy – we can narrow it down to the three production years of 2001-2003 inclusive, and the four numeral date code of 3140 gives us a manufacture date of day 140 in year 2003. This would mean it entered the system a few months after the start of the invasion of Iraq and is representative of a meal eaten by US troops in the first year or two of that campaign.

With the exception of the inclusion of the flameless heater, there was not really much difference between this meal and the second brown bag MRE, dating from 1992, which we covered in Part 1. The main course was contained in similar cardboard outer, though now there was nutritional information and health tips printed on both sides of the pack, and the foil meal pouch was a sage green shade rather than being brown. The accompaniment was standard US military crackers with peanut butter, both in tan foil pouches, plus Cheddar Cheese Pretzels in a similar pouch. A fourth tan-coloured foil pouch contained a Chocolate Sports Bar in an internal plain foil pouch. There was also a tan foil pouch containing Beverage Base Powder (grape flavour) which needed to be reconstituted with twelve fluid ounces of water.

A brown plastic spoon plus an accessory pack were included too. Menu 18 from Batch XXIII (i.e. 2003), contained Accessory Pack A, which was the most common of the five. It included a sachet of commercial brand coffee powder, sugar and non-dairy creamer, a sachet of iodised salt, a miniature bottle of Tabasco sauce, two dental chewing gum tablets, a roll of toilet tissue in brown paper outer, a book of matches designed for use in damp climates, and a moist cleansing towelette.